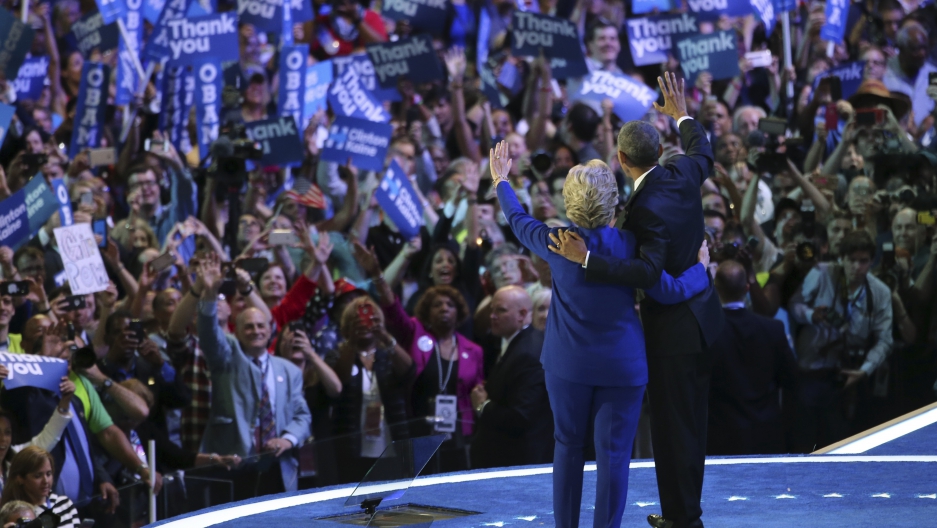 President Obama is joined by Democratic Nominee for President Hillary Clinton at the Democratic National Convention in Philadelphia.

Political candidates should not “depend on large contributions from the wealthy and the powerful,” Democrats on Monday declared while kicking off their national convention.

But the rest of the week made this clear: Democrats have a light year to go before ever reaching that goal.

Banners decorating lampposts along major thoroughfares carried the names of top convention sponsors, such as Comcast, AT&T and Amalgamated Bank.

And the swank lobby of the Ritz-Carlton, with its marble columns and soaring, domed ceiling, was packed all week with the Democrats’ most stalwart bankrollers.

The irony wasn’t lost on anyone.

At the Ritz, which housed elite contributors, donors mingled with lawmakers, shaking hands and greeting their benefactors and other acquaintances.

A long line of dark SUVs lined the sidewalk outside the Ritz, waiting to ferry deep-pocketed contributors from luncheons to cocktail hours to special briefings with top officials.

By day, Wyden said, he crafts and fights for legislation that would require more disclosure and transparency in campaign finance and reduce the influence of big donors.

And then, he said, “my staff sends me home at 7 or 8 o’clock at night with a bunch of call sheets to call people on the West Coast … and I’m calling with my little tin cup out.”

“After you’ve done that for a couple of hours you want to drown yourself in the bathtub.”

Reform the system, just not tonight

Both U.S. Sen. Bernie Sanders of Vermont and former Secretary of State Hillary Clinton agitated during the Democratic presidential primaries against the unbridled influence of money on the political process.

Sanders and Clinton have, for example, both called for the overturning of the U.S. Supreme Court’s 2010 decision in Citizens United v. Federal Election Commission, which opened the door to unlimited political spending by corporations, unions and other special interests.

But the Democrats’ week in Philadelphia also highlighted other, more traditional avenues of big-money influence that have made a comeback of sorts during 2016.

Democrats this election cycle reversed an Obama-era ban on accepting lobbyist and corporate political action committee contributions for use by the Democratic National Committee and Democratic National Convention. Freed from restriction, professional political influencers may fully participate in a parade of perks, parties and access opportunities.

Lobbyist Tony Podesta, whose brother, John Podesta, is Clinton’s campaign chairman, hosted brunches on Monday and Tuesday for clients and friends at Barbuzzo’s, a chic Mediterranean restaurant downtown. The bar was laden with marcona almonds, prosciutto and other goodies. Attendants passed pan-seared gnocchi and meatballs in polenta.

Guests included representatives from the Japanese and Indian embassies and at least two Democratic members of Congress, US Rep. Dina Titus of Nevada and US Sen. Al Franken of Minnesota.

On Tuesday night, law and lobbying firm Dentons welcomed guests to a reception at the Kimmel Center for the Performing Arts, the home of the Philadelphia Orchestra. Two former heads of the Democratic National Committee, Howard Dean and Joe Andrew, held court as guests noshed on sliders and sipped drinks from the open bar.

Hillary Action Fund, a joint fundraising committee that raises money for Clinton’s campaign and for the Democratic National Committee, feted donors at a Tuesday night reception at Reading Terminal Market, a trendy, bustling food hall next to the Pennsylvania Convention Center offering everything from Chinese food to chocolate-covered pretzels and — for that particular event — former President Bill Clinton.

The brunch itself was up a short flight of stairs that were framed by enlarged black-and-white photographs of Reid as a young boxer.

Dozens of exclusive events played out in high-end venues all over the city: a tea at the Ritz-Carlton, featuring Broadway’s Idina Menzel and Cyndi Lauper. A cocktail party at the Barnes Foundation.

Super PACs and outside political groups also made Philadelphia their playground.

For example, a constellation of groups tied to Clinton ally David Brock hosted a party near the convention arena featuring superstar DJ and producer Diplo.

Corporate sponsors also courted convention delegates at every turn — although not always with the luxurious touches afforded to lawmakers or prominent influence peddlers.

Doubet, who is an organizer for Keystone Progress, an organization that campaigns for progressive policies in Pennsylvania, said he would like to see a system of public financing for campaigns and conventions.

But on Tuesday, he ate the cheese steaks and pasta, because “I’ll do what I have to do to survive” and attending the convention is expensive.

Campaign finance reform advocates, political donors and current and former members of Congress acknowledge the tension between the money-in-politics policies Democrats advocate for and how they conduct themselves at events like the Democratic National Convention.

But most chalk it up to political necessity. Several of them parroted liberals’ favorite campaign finance trope — Democrats can’t be expected to unilaterally disarm in a world of super PACs and secret money — and insisted Democrats must play by existing rules until those rules change.

“As it is now, you operate by one set of rules that incentivizes behavior that involves getting large gifts from donors,” said Nick Nyhart, the president and CEO of Every Voice, a group that advocates for campaign finance reform.

The answer, he said, is to make sure candidates publicly commit to changing it.

Sandy Newman, head of Voices for Progress, another group that advocates for money in politics reform, said, “No one should expect Democrats supporting reform to fight with one hand tied behind their backs by restricting their own fundraising while the other side is fighting a no-holds barred attack with big guns.”

Democrats “will continue to fight for campaign reform and citizen-funded elections while Republicans will work to further erode our campaign finance laws,” said millionaire investor Sean Eldridge, who himself ran for Congress in New York in 2014.

Former Democratic U.S. Rep. Barney Frank of Massachusetts said it was important to elect Clinton because, as president, she could nominate a Supreme Court justice who would “overturn Citizens United and all the other bad decisions that freed up money from any restriction.”

"Overturning Citizens United is not going to solve the problem of money in politics," said Jonathan Soros, son of billionaire financier George Soros, a top Democratic funder who has so far given $7 million to the main pro-Clinton super PAC this election, but reportedly plans to spend upward of $25 million aiding her and other Democratic candidates and groups.

A major Democratic donor in his own right, Jonathan Soros in 2012 helped create the Friends of Democracy super PAC, which aimed to “stop the power of big money.” He has also called for the adoption of public funding systems based on the government matching people’s small-dollar contributions to political candidates.

Raising money ‘at every level possible’

Other left-leaning donors say they, too, are supporting candidates who they believe will change the current system for the better.

For now, said donor Laetitia Garriott de Cayeux, the founder of Entrepreneurs for Hillary and a member of the campaign’s national finance committee, “we do what we can to raise at every level possible.” She highlighted the campaign’s efforts to give donors who raise as little as $45 access to events.

Billionaire environmentalist Tom Steyer, with his wife, is the top individual donor at the federal level this cycle, according to campaign finance data tracked by the Center for Responsive Politics. They’ve together given more than $31 million, nearly all of it to NextGen Climate Action Fund, the super PAC Steyer founded.

Steyer, in an interview with the Center for Public Integrity after a panel event sponsored by NextGen Climate on Wednesday in Philadelphia, said big money in politics is “a huge problem.”

"But we also understand that these are the rules right now,” he said. “And so we’re participating in a system, and we’re trying to do it in a very transparent way, not hiding anything that we’re doing.”

Daniel Simon, a New York City-based donor who advises Voices for Progress, said Democrats have attempted to sponsor legislation calling for campaign finance disclosure and reform. Meanwhile, Republicans have done everything they can in an attempt to block it, Simon said.

Simon, who took the train from New York to Philadelphia to attend party events for donors held during the convention, said lawmakers often bring up how much they dislike having to spend so much time fundraising.

“I believe this is a bad system, but I also think that this is the system we have until we have the votes to change it,” he said.

Until then, the high-dollar hobnobbing among those in power and those who seek access to it continues.

Together, the super PACs have already raised money into the nine-figure range.

This story is part of Buying of the President 2016: tracking the candidates, political committees and nonprofits that are making this presidential election the most expensive in history. Click here to read more stories in this investigation. Or sign up for the Center for Public Integrity's Watchdog email.