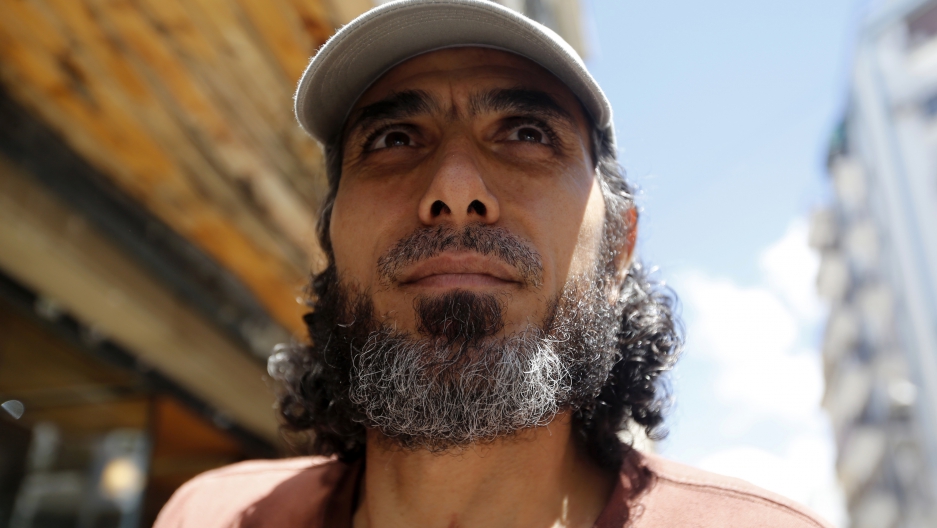 Former Guantánamo Bay detainee Abu Wa'el Dhiab looks on as he arrives for an interview in Buenos Aires on Feb. 13, 2015.

A former detainee from Guantánamo Bay has resurfaced in Venezuela after officials said he had gone missing from his new home in Uruguay more than a month ago.

Abu Wa’el Dhiab is one of six people released from the US military prison in Cuba and brought to Uruguay in December 2014.

Dhiab is a free man whom the US never charged for terrorism crimes. And, according to Uruguay, he can travel abroad as he pleases.

But Uruguayan officials caused a stir when they said he had quietly left the country last month. Neighboring Brazil was on the lookout. A South American airline issued an alert. And US Republican lawmakers used Dhiab's flight as evidence that President Barack Obama is botching the closure of the Guantánamo Bay detention facility.

The former prisoner reportedly traveled across Brazil by bus, said California attorney Jon Eisenberg, who has been representing Dhiab in a lawsuit against the US government. Eisenberg said Dhiab has requested to be sent to Turkey to reunite with his family, who recently fled the war in Syria.

Read more: Uruguay has ‘no idea’ where this former Guantánamo detainee is

Dhiab had recently surfaced in the city of Chuy, on the border between Uruguay and Brazil. This week, PRI has been in northern Uruguay following reports that Dhiab was possibly still in the country, on a religious retreat. Members of the Muslim community in Chuy confirm Dhiab visited there recently. They say he stayed for a few days, but that they don't know where he went next.

Uruguay's foreign minister told national newspaper El Observador that Dhiab showed up at the country's consulate in the Venezuelan capital of Caracas on Wednesday.

However, an official reached at the Uruguayan Consulate on Wednesday afternoon told PRI that Dhiab had not been there. The official directed calls to Uruguay’s Foreign Ministry, but calls to the ministry were not answered.

US State Department officials at the US embassies in Uruguay and Venezuela declined to comment.

It’s not the first time Dhiab disappeared from Uruguay, only to resappear suddenly in another country. Last year, he dropped out of view for a few days and resurfaced in Buenos Aires, Argentina, where he gave a television interview to local media.

“He’s not headed to the battlefield, or to terrorize the Olympics,” said Eisenberg, the lawyer, “he’s in Venezuela.”

Read more: The truth about the former Gitmo prisoner 'missing' from Uruguay