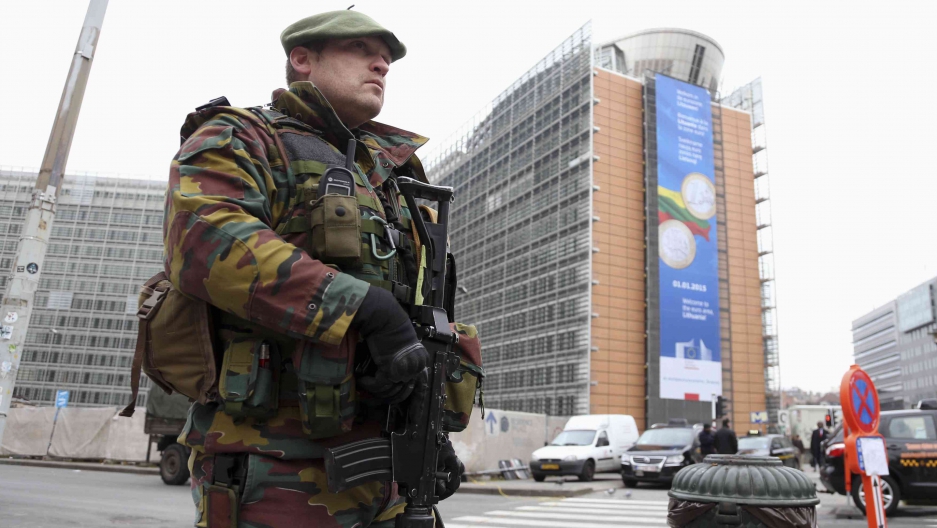 A Belgian soldier stands guard outside the European Commission headquarters in Brussels January 21, 2015.

There has been a familiar refrain, criticizing intelligence and security agencies in Europe after recent terrorist attacks. After the bombings in Paris and Brussels, the Nice truck attack and even Tuesday morning's attack on a parish church in northern France, observers have wondered why intelligence agencies weren’t able to better coordinate and ultimately act to prevent the tragedies before they happened.

Alain Juppé, the mayor of Bordeaux and a likely presidential candidate, was one of many to criticize the Frence intelligence agencies in the wake of the tragedy in Nice.

The debate in France has mirrored the one in Belgium, where spy services faced even more intense criticism in March following the terrorist attacks on the Brussels airport and subway system that left 32 people dead and more than 300 injured. Intelligence officials discovered the perpetrators had either grown up or been living in Belgium and had become radicalized. Some had gone back and forth to Syria to fight and train with ISIS.

The cell was also linked to the Paris attacks in November 2015 that left 130 dead.

One fact that particularly drew critics' ire: Two of the suicide bombers, brothers, both had criminal records and had been released early on parole. Some in the media even went so far as to call Belgium a “failed state.” For Jan Jambon, Belgian interior minister, the critics went too far.

“Every country had some attacks, and in every country, the professional security services and police services didn’t [see] them coming,” he said. “These are well-trained fighting machines. They know the communications techniques. They know how to use mobile phones. So sometimes, you catch them, and sometimes, they catch you.”

Counter-terrorism analyst Thomas Renard with Belgium’s Egmont Institute thinks that often, intelligence services are in tough spot when it comes to trying to prevent terrorist attacks.

“As long as there’s not an attack, it remains underground work. When something happens, it’s always the fault of the intelligence services. ... It’s very difficult, ” he said.

In broad terms, the push to improve intelligence agencies has generally followed three lines of thought: 1) Better centralize intelligence gathering 2) Increase the sharing of information and 2) Upgrade the state’s ability to conduct surveillance and wiretapping.

In France, a parliamentary commission set to examine state failures after recent attacks called for the creation of one nationwide anti-terrorism agency and one unified database of terrorism suspects, along with better monitoring of prisons for radicalization and stricter sentences for terrorism suspects, according to the The New York Times.

The lack of centralized security agencies has also been an issue in Belgium. As journalist and scholar John Lloyd noted for Reuters, “The Belgian services are more divided than most and more beset with scandals and charges of inefficiency.”

The problems go beyond Belgium and France. Terrorist cells operate across borders and governments have struggled to find ways to quickly and effectively share information among themselves, not just within their own agencies.

That’s where NATO is taking a new role. Until now, the alliance hasn’t had its own  intelligence function, but the ongoing threat from an increasingly aggressive Russia, the dangerous sophistication of cyber-attacks and the huge challenge posed by ISIS have convinced NATO to create the position of an assistant secretary general for intelligence.

Former State Department deputy Nick Burns served as the US ambassador to NATO in Brussels from 2001 to 2005. Now a Harvard professor, Burns applauds the new position, hoping it will help streamline information sharing and help better coordinate intelligence-sharing among allies.

“Defense in the modern age is a function obviously of your military strength, but also of your ability to be smart about intelligence but also have intelligence capacity,” he says.

But the sharing of information only works if there is information to share. On that front, Belgium has had some success in reforming and strengthening its security laws.  For example, until just a few months ago, house searches could not be done between the hours of 9 p.m. and 5 a.m. Law enforcement also now have expanded powers to wiretap suspects.

Renard thinks Belgium needs to go further in its efforts to collect human intelligence from sources embedded in the communities they are trying to monitor.

Alain Winants, who spent eight years at the helm of the state intelligence agency, notes that Belgium, until recently, had tight restrictions on wiretapping that meant they had to develop other means to get information.

“One of the paradoxes of the Belgian service was that since we didn't have the possibility of using special methods until 2010, we had to focus our attention on human intelligence, and we are known by other services for the quality of the human sources,” he says.

However, as with all things in intelligence, nothing is as simple as it seems.

This segment was part of America Abroad's episode "Espionage in the Age of Terror" about the current state of human intelligence gathering and its future. America Abroad is an award-winning documentary radio program that takes an in-depth look at one critical issue in international affairs and US foreign policy every month. You can follow us on Facebook, talk to us on Twitter, and subscribe to our weekly newsletter for updates.