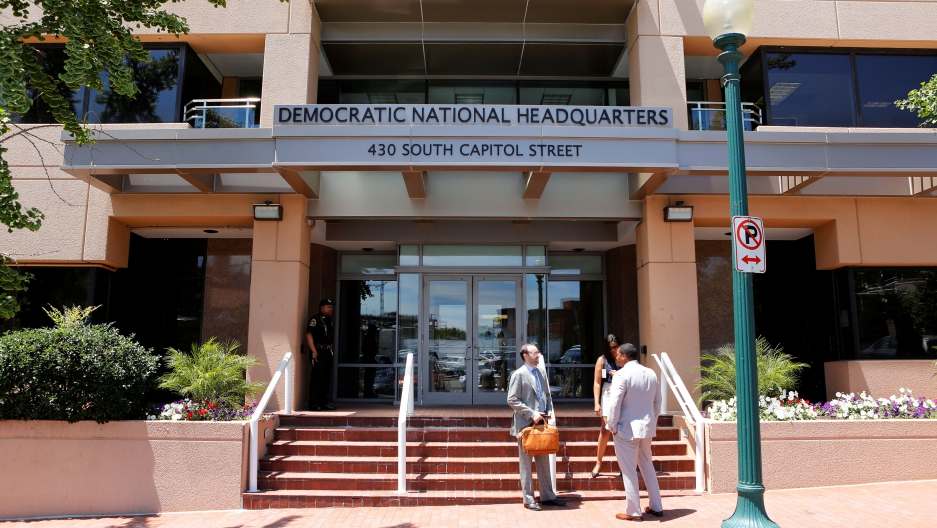 The headquarters of the Democratic National Committee in Washington. Russian government hackers penetrated the computer network of the DNC and gained access to all opposition research on Republican presidential candidate Donald Trump, the committee and security researchers said on Tuesday.

The FBI has just announced that an investigation into the hack of the Democratic National Committee emails that have overshadowed the just-opened Democratic convention.

But one journalist, Lorenzo Franceschi-Bicchierai, has already started his own investigation. And the evidence he's found points to the Russian government as the likely culprits behind the leak.

“There’s no smoking gun,’’ says Franceschi-Bicchierai. "But everything that’s come out so far points to Russia.”

He cites evidence from CrowdStrike, a security company that found the attackers used the same malware that the Russian government has used.

But after Crowdstrike announced it believed Russia to be behind the hack, something unexpected happened: A group named Guccifer 2.0 claimed responsibility. Guccifer 2.0 claims to be from Romania and acted alone.

Franceschi-Bicchierai is one of the few journalists to have chatted with an individual or individuals claiming to be behind Guccifer 2.0: via Twitter. After their conversations, Franceschi-Bicchierai is all the more convinced that the Russian government is behind the hack. And that Guccifer 2.0 is a persona made up by Russian spies to try to deflect blame and confuse the public.

One jarring inconsistency: Guccifer 2.0 did not really seem to speak Romanian, Franceschi-Bicchierai says. When he asked him questions in Romanian, the hacker responded more slowly and often with poor grammar. Also, at first the English wasn’t very good, but then seemed to improve markedly. It was as if, Franceschi-Bicchierai says, a different group of people took over the account. And, in the original blost post, Guccifer 2.0 used emoticons that are most often used by Russians.

Of course, these are only "breadcrumbs," says Franceschi-Bicchierai. But they are suggestive.

Hillary Clinton’s campaign manager said Sunday that Russian hackers might be releasing these emails in order to weaken the Democratic National Committee and help Trump win the election.

Franceschi-Bicchierai does not quite buy that. The timeline does not make sense, because it seems like the first hack could have happened maybe even a full year ago.

But it does seem like, he says, somebody is trying to confuse people.

“In a way, if this is really Russia, they have won, at least for now,” says Franceschi-Bicchierai.

While the Kremlin denies being responsible for the leak, there are well-established financial ties between Trump and Russia.

“[Trump] was here in Moscow to hold a Miss Universe competition and made quite a bit of money off of that, in fact, using Russian sponsors to pony up the money. He’s repeatedly tried to open businesses here, a Trump Tower for Moscow. It never quite worked out for him, but he seems to be pursuing that as well,” says Charles Maynes, a journalist based in Moscow.

And not only does Trump have financial ties to Moscow, but perhaps personal ones as well. Back in December, Vladimir Putin called Trump a “colorful person,” but Trump interpreted the phrase to be he’s so bright that he’s a “genius.”

“He called him a yarki chelovek, which means a colorful person. It means that he’s a guy that you take notice of, but not a lot more than that necessarily. I think Trump ran with this as a genuine compliment,” Mayes explains.

While the Russian president has not yet actually outwardly complimented the Republican nominee, Trump’s questioning of defending NATO allies struck a chord.

“From the Russian side, at least from the Kremlin political side, they’re very against NATO expansion. They’re interested in encouraging NATO’s disintegration in whatever means that they can,” Maynes says.

In many ways, Maynes says “Russians look at this and it looks very familiar to them.”

“There’s a person on the political scene here for many years, Vladimir Zhirinovsky, who is a nationalist and a member of the Duma — part of the so called official opposition, which isn’t really an opposition at all — he embodies some of these same traits: A combination of a circus entertainer and politician and scandalist all at once and invoking a little bit of nationalism as well.

"I think, for Russians, they look at Mr. Trump more as a version of Zhirinovsky, just one who actually has a chance at the White House.”