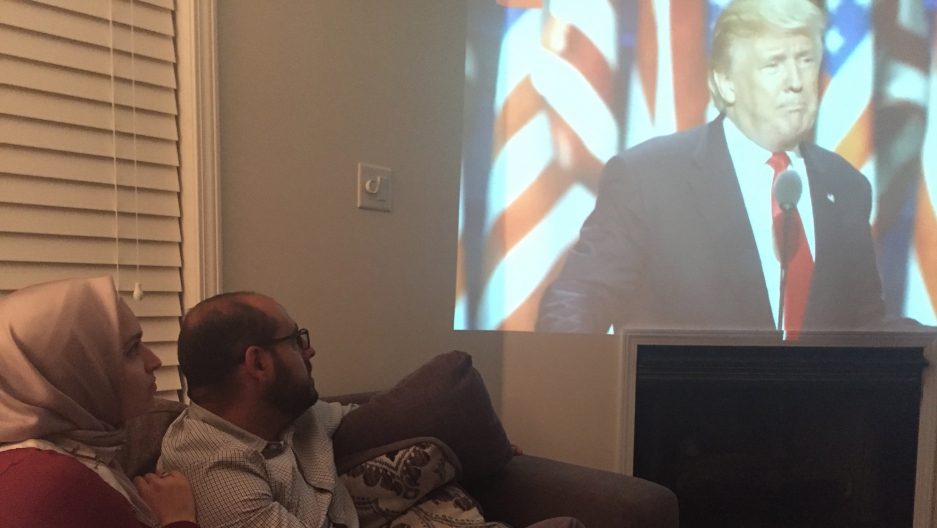 One of the groups Donald Trump has been most vocal about is Muslims. Back in December, he called for a complete shutdown of Muslim immigration to America. So as he spoke at the Republican National Convention Thursday night, Muslims were watching closely.

In one house in New Jersey, Omar Awad and his wife, Marwah Maasarani, settled down to watch.

Awad and Maasarani live in a townhouse in the town of Lodi. They say all their neighbors are Muslim, mostly from Turkey. The couple’s families are from Egypt. Maasarani, 25, says she’s a devout Muslim — she wears a headscarf and follows the religious rules.

“I’m also an American, a devout American, I guess you could say,” she says. “I was born and raised here so this is what you could call home.”

Awad was also born in New Jersey, though he lived in Egypt for 10 years when he was a kid. Awad worked in the field of biomedical engineering before leaving to become the president and CEO of the largest mosque in the area, the Islamic Center of Passaic County.

Awad and Maasarani say that watching the Republican National Convention has been an evening ritual all week. They’ve been paying special attention to comments about Muslims and immigrants.

“After a lot of the different terror attacks that took place throughout the globe, Donald Trump was saying we need to ban Muslims and figure out what the hell is going on,” Awad says. “I don’t think Muslims are an epidemic.”

“I think what’s concerning is that the fear mongering is working and people are behind the hate speech,” Maasarani adds. “It’s a little concerning that there are so many people that are OK with that.”

Suddenly Awad’s phone goes off. It was the aisha prayer, the last prayer of the day, and Awad gets five notifications a day for the prayers.

“That’s the beauty of having Islamic apps,” he says.

Midway through the speech, Trump brings up the Middle East and makes the statement that as Secretary of State, Hillary Clinton managed to “almost single-handedly destabilize” the entire region — and that during her tenure, Egypt was turned over to the radical Muslim brotherhood before the military took control. Listening to that, Awad says Trump doesn’t know his Egyptian history.

“There was a revolution in Egypt, then an election, then a coup,” he says.

“He also seems to be giving Hillary credit for the Arab Spring, basically,” Maasarani says.

Then Trump brings up the issue of immigration and refugees from the Arab world. He says America must “suspend immigration from any nation that has been compromised by terrorism.”

Maasarani has a comment on that. “So he’s kind of put some parameters to the blanket statement that he made a ban on Muslims,” she says. “'The ones that have been compromised.’ What does that mean? Only some countries? Either way it’s troublesome.”

Even while the Trump campaign rhetoric has been unsettling for Maasarani and Awad, they say they feel supported as Muslims in New Jersey. Awad says his mosque just opened a second campus, and town councilors were there to wish them well. Maasarani says her company asked her to give a presentation last month about Ramadan, the Muslim holy month of fasting.

“And they were like, is there anything we can do to make this month easier?” she says.

The couple notes that one person who did a lot for local Muslims in New Jersey was Governor Chris Christie. Back in 2011, Christie appointed a Muslim lawyer to be a judge in New Jersey Superior Court in Passaic County. Now, Christie is one of the bulldogs for the Trump campaign.

In the end, Maasarani and Awad say the most remarkable part of the night is what they see as the lack of any real plans in Trump’s speech — yet the crowd loved it.

Next week, they’ll be tuned in to the Democratic National Convention in Philadelphia to hear what Hillary Clinton has to say. Maasarani went to the same college as Clinton — Wellesley — but she says she was a Bernie Sanders supporter.

She says Clinton hasn’t connected with her — yet.