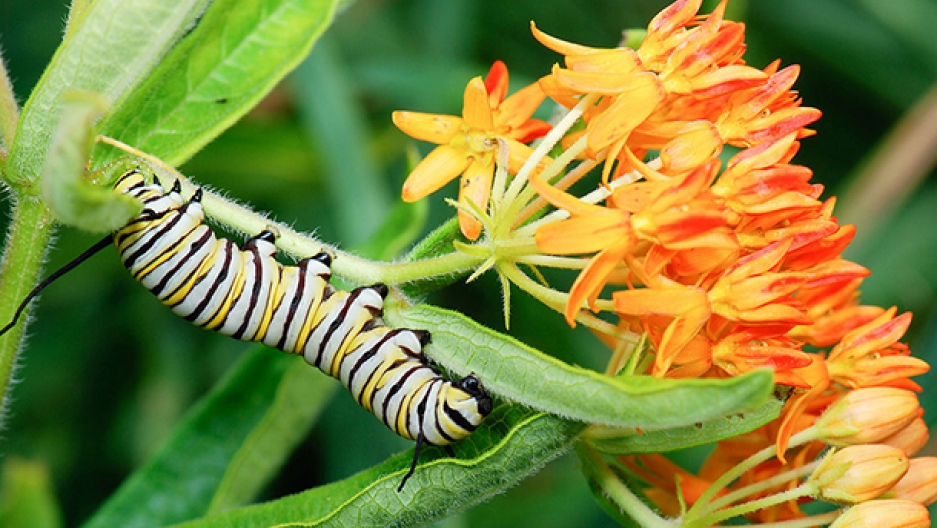 A Monarch butterfly caterpillar feeds on milkweed. Along Interstate Highway 35, a 1,568-mile-long road between Duluth, Minnesota and Laredo, Texas, Monarch habitat is being preserved.

The next time you’re tooling down the highway somewhere in America, take a look around: Those miles of medians and roadsides along our highways offer unexpected environmental benefits.

All those broad, green strips along the nation’s highways turn out be vital habitats for many small critters, as well as pollinators including bees, butterflies and birds.

The sum total of the area between the pavement and the right-of-way fence on county, state, and interstate highways is 17 million acres — all of it a conservation opportunity, says Bonnie Harper-Lore, a restoration ecologist for the Federal Highway Administration and now a member of the Commission on Minnesota Resources.

“I saw roadsides as an opportunity to benefit wildlife from the beginning of my career, 30 years ago,” she says. “Small wildlife, small birds, small mammals and migrating birds all use these same corridors. If they have places to find food and cover, they are all going to do better and their populations will continue to hold where we need them to hold.”

Roadside areas contain some surprising habitats, too, like remnants of North America’s original native prairie and old-growth trees. Harper-Lore would like see a complete inventory of the nation’s roadside vegetation. “I think we would be surprised at how many remnants of these old forests, old prairies and old wetlands do exist,” she says.

Up until recently, each state Department of Transportation has basically done its own thing and made its own priorities, Harper-Lore points out. But a new White House task force on pollinators and a law that specifically supports pollinators leads her to believe states will start moving in the same direction, especially if they know the public is interested.

A project along the I-35 corridor serves as a great model for what multi-state cooperation can achieve, Harper-Lore suggests. In 1993, a group of six states asked the Federal Highway Administration to work with them to get funding to support their effort to restore prairie along the I-35 corridor and to protect any remnants that still existed.

The corridor runs north-south between northern Minnesota and Mexico, which almost matches the route monarch butterflies travel on their migration. In addition to restoring prairie, an effort began several years ago to plant more milkweed along the corridor to help sustain the butterflies along the way.

“It's amazing,” Harper-Lore says. “When you're screaming by at 55 to 70 miles-an-hour, there are things happening out on that green strip that you probably will never, ever imagine.”