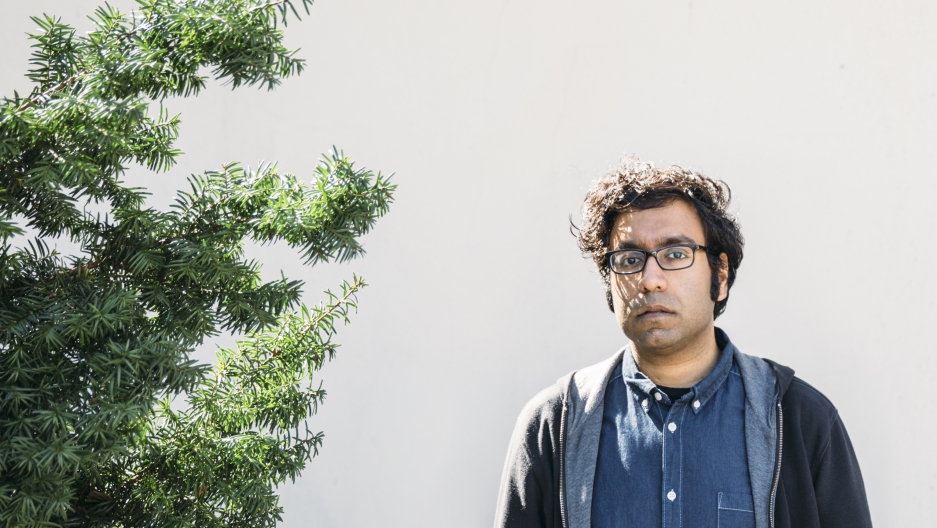 Hari Kondabolu’s jokes are often political, but he doesn’t like being labeled a “political comic”: “I don’t want the stuff I talk about to be niche issues. These are things that should be part of the mainstream discussion.”

“All three words are things I’ve had to fight for,” says Kondabolu.

He may not be a household name, but he has developed a passionate following for his work. In some ways, he has broken through. Six episodes in, his new podcast, with W. Kamau Bell, “Politically Re-Active,” has already been in the top 15 on the iTunes charts. 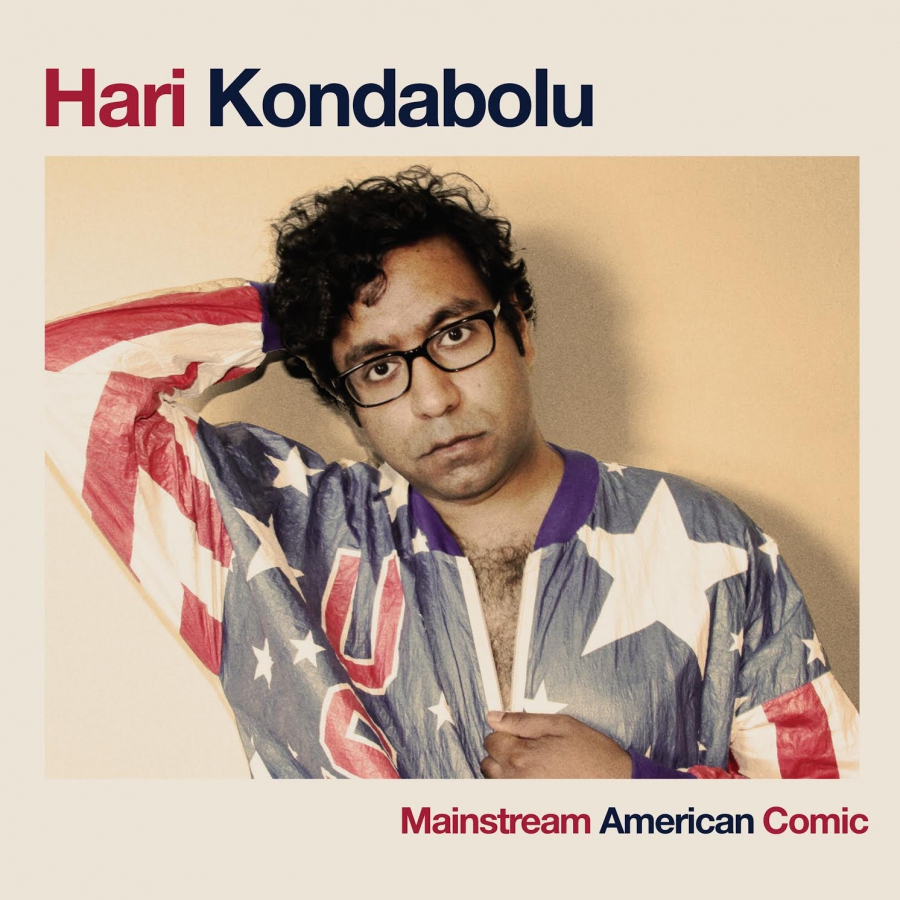 The cover of “Mainstream American Comic.” “All three words are things I’ve had to fight for,” says Kondabolu.

On the cover of his new album, which will be released on Friday, Kondabolu is posing in a USA stars and stripes jacket, his right hand running through his curly hair — its enviable softness and texture a result of coconut oil, he often jokes — and his left hand unzipping the front slightly, giving fans just a tease of what’s underneath.

The jacket, made out of glossy paper, is a prize he got from a cereal box as a kid.

“I thought it was made out of leather, so I collected the UPC symbols and sent in $10,” he remembers. “I was so upset when I found out it was paper!”

Little did he know he’d start using it in his comedy act when he was 19. He called it his “homeland security/angry white person protection jacket” for brown people post-9/11. The jacket even made it onto an airline security bit he did on “Totally Biased,” an FX show he wrote for and appeared on in 2012 and 2013.

“I’m sure I have friends who are like, ‘You’re still using that jacket?’” Kondabolu says.

The photo was an outtake from a photo shoot he did for a 2016 Haikus with Hotties calendar, a celebration of Asian men. Kondabolu is Mr. October. (I created the calendar, assuming it would be an inside joke for fellow Asian Americans who are painfully aware of the lack of good Asian male representation in Hollywood. As it turns out, people of all backgrounds are craving a more diverse spectrum of leading men.)

Kondabolu’s frequent declarations of his sex appeal can range from humorous to earnest.

“This self hatred that many of us people of color have is because we weren't depicted as beautiful in mainstream America,” he says. “So I think it’s important to show that at 33 years old, I’m more confident than I’ve ever been before.”

But his desire to broaden what people consider “mainstream” is completely serious.

On the new album, he objects to a particularly tokenistic description of his comedy show when he performed at Skidmore College in 2011. The promoters of the show described it as: “Rice, laughs, and curry sauce… Hari’s coming to spice it up with his own special blend of South Asian humor.” 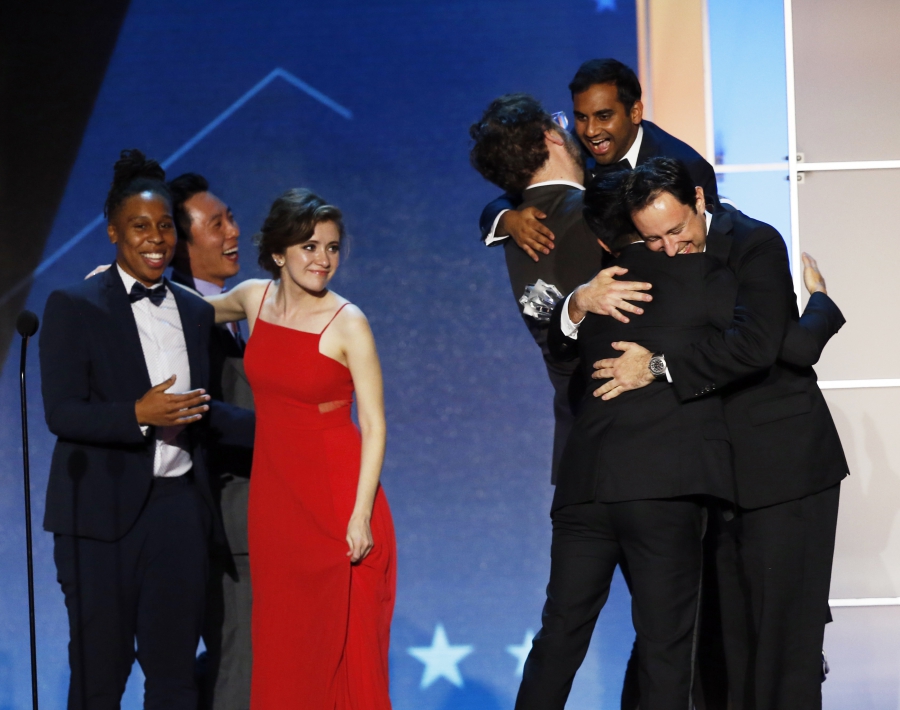 Aziz Ansari, on top of the heap at right, celebrates with other cast and crew after winning the award for Best Comedy Series for "Master of None" during the 21st Annual Critics' Choice Awards in January. Last week, the show got four Emmy nominations, including Best Lead Actor. It’s a “very specific accomplishment” because he is the first Indian American to be nominated in this category.

"In general, the understanding has been that 'mainstream' is a sort of shorthand for white entertainment for a white audience," says Los Angeles Times film critic Justin Chang. "Though it's changing — as we saw from the Emmy nominations last week, where Aziz Ansari was nominated for Lead Actor in a Comedy and there were actors of color in almost every single category. I think we’re all for exploding the definition of ‘mainstream’ to the point where it can accommodate many different identities and cultures.”

And changing the definition of the word is not all that new of a concept: What’s considered to be part of the “mainstream” has always been fluid. The word dates back to the 1600s, referring to the principal current of a river. The earliest figurative use of “mainstream” is attributed to Thomas Carlyle, who in 1831 wrote an essay in the Foreign Quarterly Review. Even then, he was referring to a shift in everyday perceptions rather than an immutable standard. 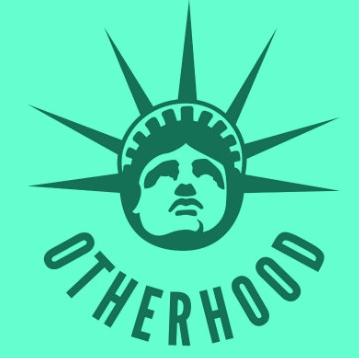 A PRI podcast created and hosted by Rupa Shenoy about the people who came to the United States as children or are the children of immigrants.

“Mainstream” began to catch on more popularly in the 1950s, likely because that’s when television emerged as a medium that both reflected and influenced popular opinion. But people often have a love-hate relationship with the word. Politicians have used it both as a tool to align themselves with the common man and as a weapon to paint their opponent as outdated and resistant to necessary change.

“Putting aside the question of race, because that’s only one part of it, I tend to dislike the idea of anything being the dominant majority,” says Chang. “Often, I’m trying to get readers to pay attention to movies outside of the mainstream, the ones that are worthwhile but don’t have the big budgets, big studios and advertising budgets to get seen.”

For Kondabolu, being mainstream means being aligned with the entertainment icons that influenced him so much as a teenager growing up in Queens, New York. It’s about being part of a tradition, with the “The Simpsons,” “Late Night with Conan O’Brien” and “Saturday Night Live,” along with “Fresh Prince of Bel Air” and “Seinfeld.”

In “Mainstream American Comic,” he gives monologues about his love for Surgeon General Vivek H. Murthy, his hatred of former Louisiana Governor Bobby Jindal, and his mother’s dislike of discussing the death penalty at the dinner table. He also talks about current issues such as the presidential election, gun control and police brutality.

“I don’t want the stuff I talk about to be niche issues,” he says. “These are things that should be part of the mainstream discussion.”

Chang too, who is one of few non-white American film critics working in mainstream media, has never wanted to be seen as “the Asian American critic.” But he understands the impact it’s had on others just to see a person of color in his role. Earlier this year at the Los Angeles Film Critics Association Awards, director Ryan Coogler singled Chang out as an example of the diversity that Hollywood should strive for not only in the creative spheres, but in executive roles and in journalism — in all facets of the entertainment industry.

“As a critic, I’ve always hated the idea of some films getting praised simply because they’re relatable,” says Chang. “Don’t get me wrong, I’m all in favor of art that strikes a broadly accessible chord. But it seems narcissistic to place value on something just because it speaks to your own specific experience, which I think too easily gets mistaken for universal experience. We should be looking for different types of stories and, perhaps more importantly, different types of storytelling.”

“I feel like we’re in a period of great change,” says Kondabolu. “More people have voices than ever before, and the mainstream media is so dependent on the Internet for information, so it allows us to start from the bottom up and make an impact.”

Impact can be greater, though, than so-called mainstream gigs and accolades.

One photo of a protester made the rounds on social media in late 2014, after Kondabolu released his first album. Her sign featured one of his lines: “Telling me that I'm obsessed with talking about racism in America is like telling me I'm obsessed with swimming when I'm drowning."

“My standup album ‘Waiting for 2042’ was not nominated for a Grammy,” he wrote then on his Tumblr. “But this sign at a protest in NYC after the grand jury verdict regarding Eric Garner’s murder means more to me.”