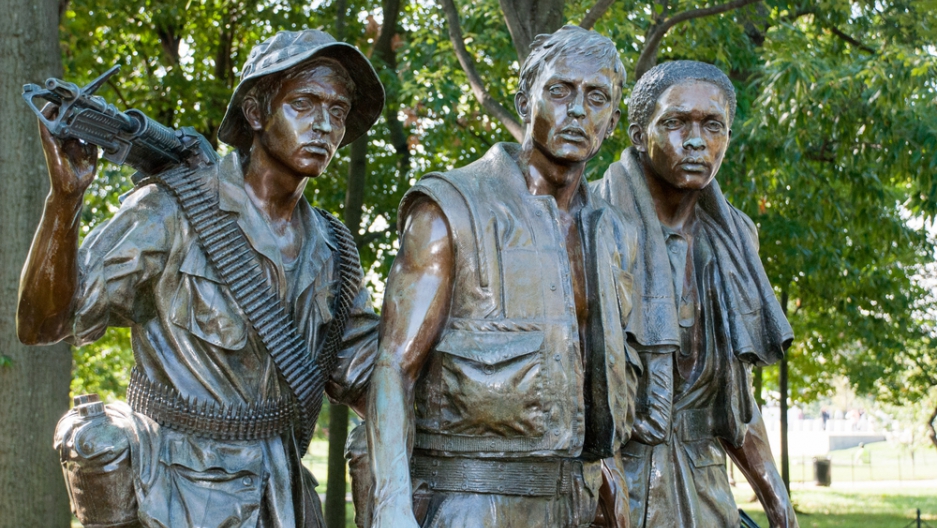 Conflicts around the world have left too many casualties to count. And while there are many visible war wounds, from missing limbs to scarred flesh, battle also leaves hidden injuries — to the brain.

Military doctors are starting to pay more attention to concussions and other traumatic brain injuries on the battlefield, and to the possible role that brain trauma might play in conditions such as PTSD.

Kit Parker is a war veteran who did a combat tour in Afghanistan. He’s also a member of the Wyss Institute for Biologically-Inspired Engineering at Harvard University, and more recently a neurology expert.

“I was talking to a buddy of mine who was wounded,” Parker says. “I got pissed and I decided I’m going to become a neuroscientist because I was going to survive this war with my buddies.”

Parker now studies combat brain injuries, and says the way the US understands war wounds needs to be improved.

“Imagine if you take a young war fighter and you put him out there on a battlefield and you take his brain and you soak it with testosterone, you soak it with cortisol, you soak it with adrenaline, and you put him in a situation where his life is on the line, but that's not the worst part. The worst part is the moral jeopardy of the the decisions you make every day,” Parker says. “Once you pull them out of that environment, there have been changes to that brain. We don't know exactly what they are, but I can tell you there are changes to that brain and how they adapt to that non-threat environment is one of the biggest challenges that these young veterans — and older veterans too — face when they come off the battlefield.”

Parker and others are working to better understand the so-called “invisible wounds” of war. He and Jeffrey Lieberman, a professor and chairman of psychiatry at Columbia University College of Physicians and Surgeons, say things are slowly beginning to improve.

“The military and the NFL got religion in sort of the same way at about the same time,” Lieberman says. “There's a notion, which is understandable but not warranted, that if you can't see it, it doesn't exist. And the notion was if there's no demonstrably physical signs of an injury, traumatic or otherwise, then it's not real and it's not having any harmful effect.”

Now the military is beginning to embrace the idea that both physical and psychological trauma can result from combat exposure and exposure to blasts from IEDs.

“How you handle the situation when somebody is near an explosion has totally changed,” says NPR science correspondent Jon Hamilton. “It used to be that chances were they would be just sent back in, say, ‘Kid, you're fine. Go back in and fight again.’ Now there are rules that require people in combat who have been exposed to an injury or to a blast like that to be pulled out and examined and the assumption is that they may in fact have a physical injury to their brain.”

Parker says new research is showing how blows to the brain produce different types of injury.

“It used to be [thought] that some type of dramatic injury to the brain would kill neurons. But now we realize that smaller mechanical blows, or smaller magnitude mechanical blows — the same thing that causes a concussion — can injure neurons but not necessarily kill them. And what we find is that when these neurons are injured they start to retract, they disconnect from the neural network — the networks of cells that are in the brain that allow you to count your change when you're at a fast food restaurant or recognize your friend, or to do any type of computation,” Parker says.

Blast injuries, according to Parker, also injure the brain by disrupting blood flow.

“The brain is a very metabolically expensive organ. It eats a lot of energy, and you have a lot of blood flowing up there. And in blast traumatic brain injury, we found that the blood vessels can be damaged. The soldiers are coming back with cerebral basal spasm. That's something that you don't customarily see with a football player who's been concussed,” Parker says.

Research by Daniel Perl, director of the CNRM Neuropathology Core in the Center for Neuroscience and Regenerative Medicine, is beginning to uncover some of these invisible brain injuries sustained in combat. When Perl looked at brain tissue samples taken from soldiers during autopsy, he discovered unique patterns of scarring.

“We found that service members who had been exposed to blasts such as improvised explosive devices — IEDs — showed a very unique and distinct pattern of scarring in the brain, which we believe is related to their exposure to these high explosives. We compared these cases to civilians who have been in things like automobile accidents where there was no blast exposure and they didn't show this pattern of scarring,” Perlman says. “We've been trying to see if we can find this this abnormality with scans and so far they haven't shown up. It's one of the reasons why this is referred to as the invisible wound. The scans are really marvelous, but, you know, they have their limitations. And so far we haven't been able to see these abnormalities on scans.”

While scientists are making headway in uncovering the hidden wounds of war, most agree that there is still a lot of work left to do in preventing such wounds and funding research to diagnose and treat them.

“It's been late in coming and it's going too slowly,” Lieberman says. “Individuals who put themselves in harm's way to defend our nation should be the highest priority of medical research and treatment. And we have a spectrum of injuries that are incurred in the context of combat from TBI [Traumatic Brain Injury] to now this concussive form of injury, where there's not necessarily the traditional ways of diagnosing it or seeing it, to psychological trauma. And it's been kind of a reluctant too little too late process to get on top of it. If this was Ebola, if this was Zika, if this was AIDS, we’d have been all over it.”