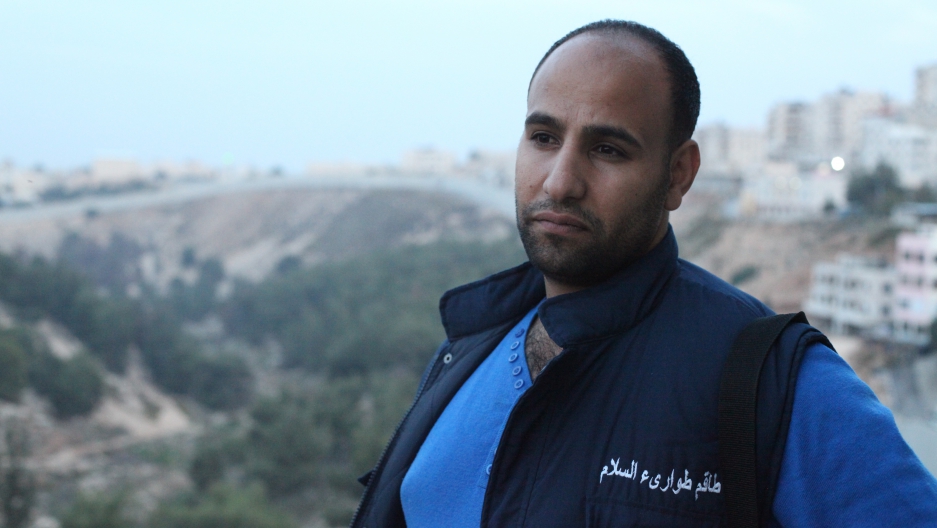 Baha Nababta in the Shuafat refugee camp in November 2014. He devoted his life to improving the camp before he was shot to death this year.

In east Jerusalem, one Palestinian activist used to have a dream: to bring Israeli police to his neighborhood. Then he was murdered. Now, the people of Shuafat refugee camp wonder whether sticking your neck out to make a change is worth it.

Baha Nababta grew up amid the jumbled concrete buildings that make up Shuafat refugee camp and its nearby neighborhoods. The Jordanians built this camp in the 1960s to house Palestinians who left their homes in Jerusalem, Ramle and Lod. After the 1967 Mideast War, the camp became the only Palestinian refugee camp in Israel.

About a decade ago, Israel surrounded Shuafat camp with a concrete wall and military checkpoint, part of the separation barrier that was built to stop a wave of Palestinian attacks on Israelis. Despite the wall, Shuafat camp has a special advantage: residents there technically live inside Jerusalem, but for cheaper, and many hold Jerusalem residency status that give them the right to travel and work in Israel and get Israeli health insurance and pensions. West Bank Palestinians don’t have those rights. So about 70,000 Palestinians live in the cramped camp and its surroundings.

Palestinian police aren’t allowed to patrol in Shuafat camp. Israeli authorities say it can be dangerous to work there, so they have withdrawn services like ambulances and fire fighters.

Nababta decided to fill in those gaps in vital services. He started an emergency team to clear snow in the winter and help with medical treatment. A donor in Los Angeles paid for stretchers and oxygen tanks. In 2014, Nababta showed me around camp. He helped residents pool their money and pave roads in front of their houses. He could see, from over the wall, what a different life might look like: the orderly homes in Pisgat Zeev, an Israeli neighborhood in east Jerusalem.

“I dream to be in my street and my home like that,” he said.

Still, there was a lot Nababta couldn’t fix. Garbage burned in two large green dumpsters right across the street from a health clinic. Motorcycles zoomed past us, driven by boys with no helmets. A young man drilled directly into the street in front of his house. He said he would put a pole in the asphalt to stop people from parking by his front door. 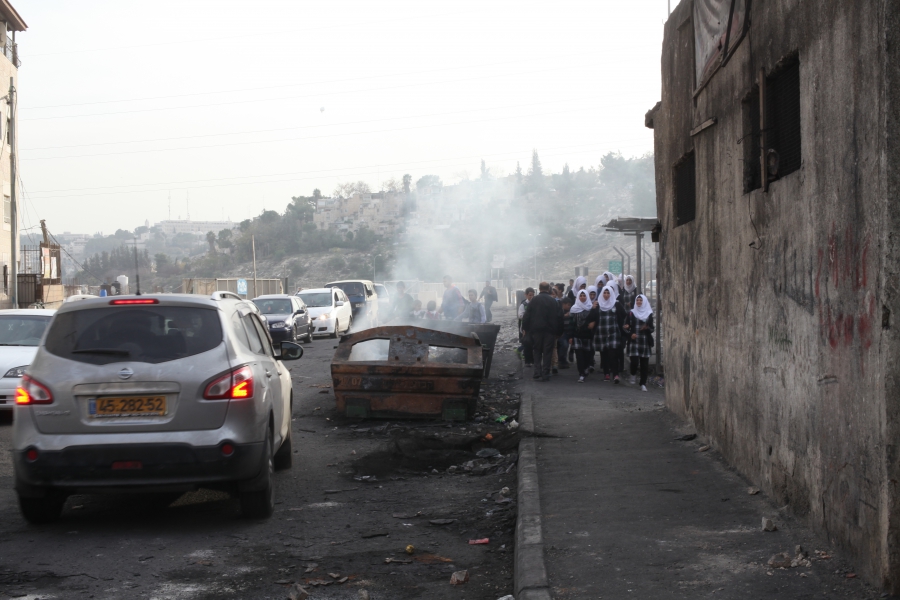 Schoolgirls pass a dumpster filled with burning garbage in Shuafat refugee camp in November 2014. People burn trash because trash collection is haphazard there.

“I remember 15 years [ago], the street was big,” Nababta said. Now, homes were crammed together over narrow alleys. “It’s because we don’t have police here. Everybody build in the street. Everyone makes balcony or [steps] in the street.”

Nababta, who spoke Hebrew, enlisted Israeli allies and planned to protest in front of Jerusalem city hall to demand better services and a crackdown on guns. It was a radical move. Palestinians claim east Jerusalem as the capital of their future state, and many east Jerusalemites don’t vote or work with Israeli authorities.

On the night of May 2 of this year, Nababta was directing traffic as a road team repaved the rutted main avenue in Shuafat. Jerusalem authorities had finally come up with funding for the repairs.

Ahad Otman was nearby at his gas station.

“The three first shots, they were so quickly,” he said. “I asked what is going on what is happening, and they said Baha was shot by someone who was on a motorcycle.”

Nababta was rushed through the checkpoint to a hospital in Jerusalem, where he died from his wounds. Israeli police say they’re investigating the murder but so far there has been no word on a suspect.

Nababta left behind a wife and a daughter. A second child was on the way. 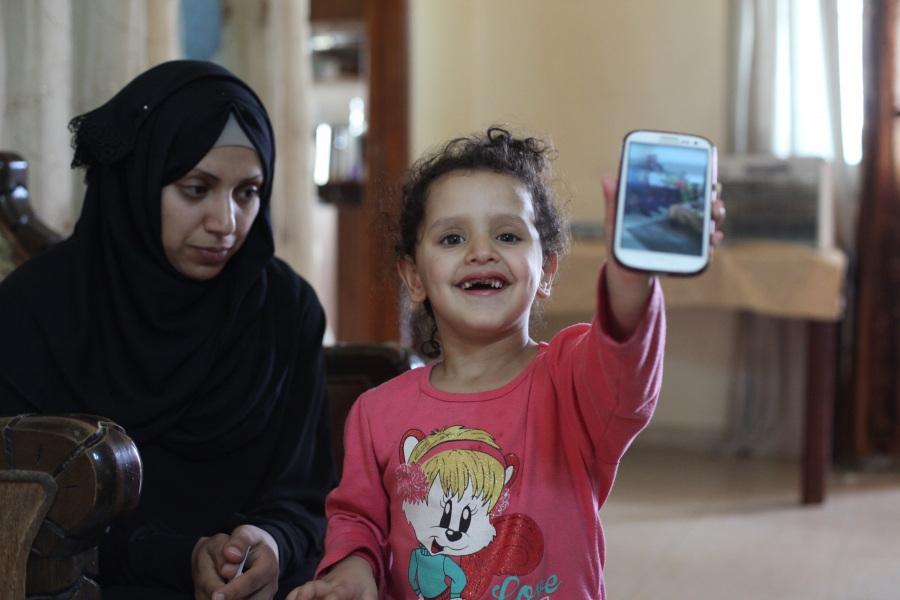 Nababta’s work made small improvements in Shuafat, but the camp remains a slum. Weeks after his murder, a few stores had signs on their doors in memory of Baha Nababta, “the martyr.” Men sold nectarines just steps from huge piles of burning trash. Kids still drove motorcycles.

Sheikh Abdullah Alkam serves as an unofficial sheriff in the camp. He says everyone in the camp thinks Nababta was murdered by another Palestinian. Alkam had two theories. One was personal — that someone in the camp was jealous of Nababta’s success. The other was political.

“Baha believed in getting help from community centers and we all know the centers are under the auspices of the Israeli government. People rejected that option,” he says.

Israeli civil rights activist Ronit Sela worked closely with Nababta on some of his projects.

She remembers something he would tell her when she would cross the wall to visit him in the camp:

“He said, ‘I see this concrete wall every single day, and I would want it to be torn down and that’s something I can’t control. But I do want to make sure that in my heart I don’t have walls.’ ” 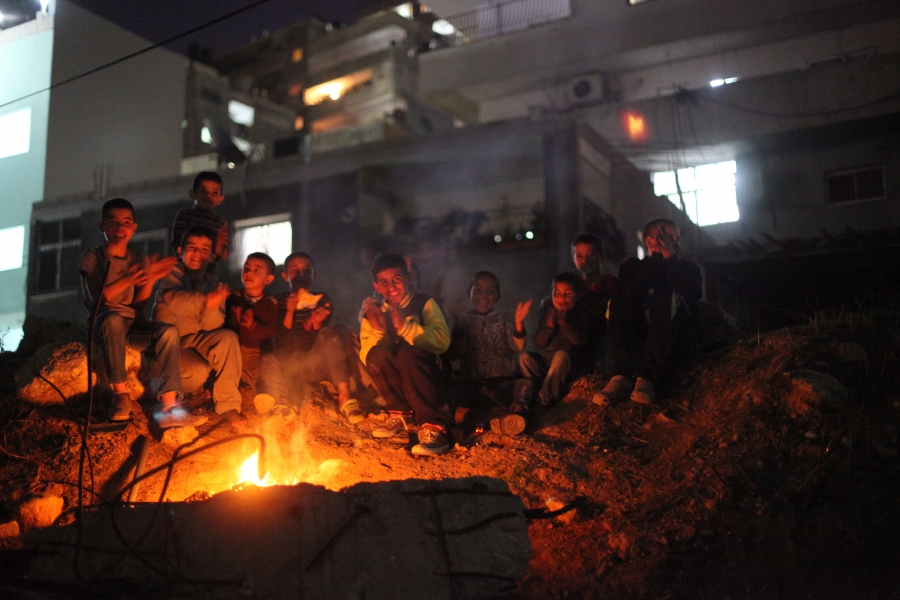 Children play by a bonfire in Shuafat refugee camp in November 2014. Activist Baha Nababta devoted his life to improving the camp, including increasing activities for youth, but he was murdered before he could carry through his plans.

Nababta’s brother and others in Shuafat say they will continue his work. Jerusalem authorities say they would like to complete the road that Nababta started paving the day he was killed. He only got through about 30 feet.

At the moment, the road is unfinished.