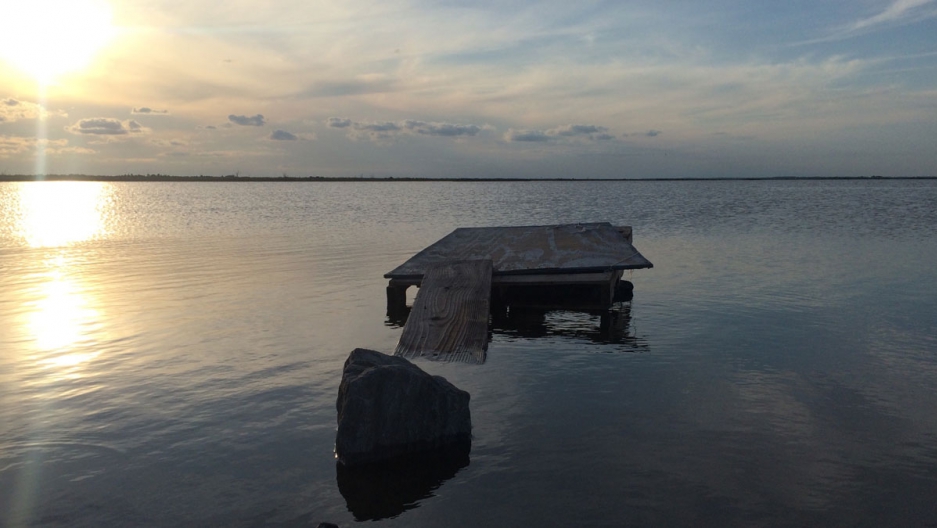 Isle de Jean Charles, along the Louisiana’s coast, toward the bottom of Terrebonne Parish. Fishing culture has changed dramatically as Gulf of Mexico water has mixed into former freshwater marshes. Isle de Jean Charles residents have to go much farther for their catch.

Leaders of the indigenous tribe from Louisiana’s Isle de Jean Charles say they want to help other low-lying communities around the world cope with sea level rise.

“We know we aren’t the only ones,” says Chantel Comardelle, a Biloxi-Chitimacha-Choctaw Indian who claims the Isle de Jean Charles as home. “This isn’t just about us."

With a $48 million federal award, the tribe intends to buy property, build homes and other facilities, move tribal members from the island, and repair wetlands in the area. It consulted relocation experts and federal guidelines for housing and environmental protection, to make a budget.

Written into the tribe’s resettlement proposal is the idea that Isle de Jean Charles is “ideally positioned” to test “adaptive methodologies.” In plain English, that means the tribe has argued that its own relocation could provide a practical roadmap for moving low-lying communities around the world.

Countries confronting immediate and rapid sea level rise include the Marshall islands, the Maldives, Indonesia, Tuvalu, Kiribati and Bangladesh, some of which have sent emissaries to southern Louisiana. There, on the Isle de Jean Charles, they find people holding similar beliefs — people who have long said what they want most is to stay and fight for their land.

Two years ago, Chris Loeak, then-president of the Marshall Islands, stood in front of a sea wall he helped build to deliver a video message to the United Nations Climate Summit.

“Some tell us that we should begin planning to leave. But how can we? And why should we? These islands are our home,” Loeak said. “Are the world’s polluters asking us to give up our language, our culture and our national identity? We are not prepared to do that — we will stay and fight. If the water comes, it comes.”

But as land has disappeared, so has the option to stay. A recent study about the Solomon Islands concluded that five islands have disappeared since World War II, and six are losing shoreline fast; some villages have already relocated.

In Louisiana, that’s happening too. The Christian Science Monitor reported that 10,000 people had moved inland away from threatened coastal homes as of 2007 — an estimate that Kristina Peterson, an applied anthropologist with the Lowlander Center in Houma, reckons is low. Peterson helped the Isle de Jean Charles apply for the federal grant. She says when members of the tribe realized that they weren’t alone in losing land, that understanding made them feel stronger about protecting their community’s network of relationships, and having a say in their own futures. “It became a sense of power,” she says.

Questions like how to get along with new neighbors and where people will work are still pretty new — at least when it comes to climate change. In a report for the United Nations High Commission on Refugees, the Brookings-LSE project’s Elizabeth Ferris wrote that humanely relocating climate refugees isn’t much studied “out of a concern that doing so would take pressure off national and international actors to implement mitigation measures, which would make it possible for people to remain in their homes and communities.”

But that’s changing, say lowland advocates — and Peterson argues that’s where the experience of the Biloxi-Chitimacha-Choctaw tribe can come in.

“They know that they are going to be under the microscope of everybody watching, everybody looking, everybody interviewing them for years and years to come,” Peterson says. “They're willing to do it on our behalf, and I think we should honor that.”