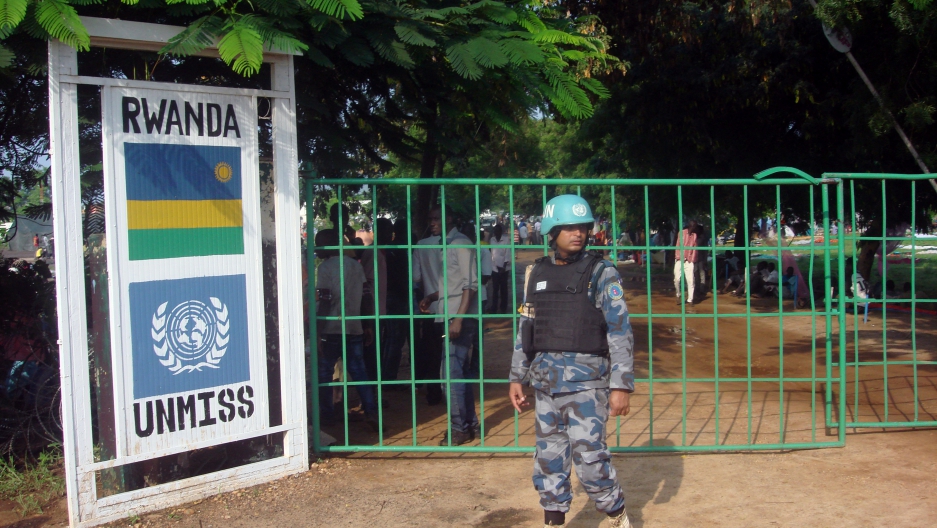 A UN peacekeeper stands outside a camp for internally displaced people in the United Nations Mission in South Sudan compound in Tomping, Juba on July 11.

South Sudan became the world's newest country when it split from Sudan in 2011.

But there wasn’t even an independence honeymoon period for this nation, and now there are fears of another full-blown civil war.

More than 200 people have died in South Sudan since Friday because of clashes between forces loyal to the country’s president and fighters supporting the vice president. The two were bitter enemies before working together in office.

The United States said Monday it was ordering all non-essential staff to leave its embassy in Juba.

Dale Willman trains journalists around the world. He was recently in South Sudan.

“Saturday was the country’s fifth independence day, but there were no celebrations, only fighting,” he says.

President Salva Kiir and Vice President Riek Machar both ordered a ceasefire on Monday, after days of shootouts involving heavy artillery, tanks and even helicopters.

But, Willman says, “it’s not clear how much control either Riek Machar or Salva Kiir have over the troops today.”

What's the reason for all of this? Ethnic conflict may be the first thing to come to mind, but Willman says there is more.

“But it’s much broader than that,” Willman says. “It’s also the economics of the country. People are incredibly impoverished and with low oil prices the country is essentially bankrupt. … The currency has depreciated by almost 90 percent since December, and approximately 4 million are considered to be food insecure.”

So what is the international community doing to help?

“The UN of course has troops in South Sudan,” Willman says. “The US has played a role in the birth of South Sudan. George Bush is considered by many in South Sudan to be the father of their country, and yet they don’t have any influence in stopping the fighting. It is a very fluid situation … so it’s difficult for other governments to have any influence when it appears even the leaders of the country don’t have a clear idea of what is happening.”

According to Willman, journalists in the country play a significant role in helping to dissolve the conflict.

“When I first arrived, the thing that amazed me the most was that the journalists I was working with were saving lives every week with the stories that they produced,” he says. “There are journalists there who despite the difficult situations are doing an amazing job trying to inform the public and help them grow as a new democracy.”