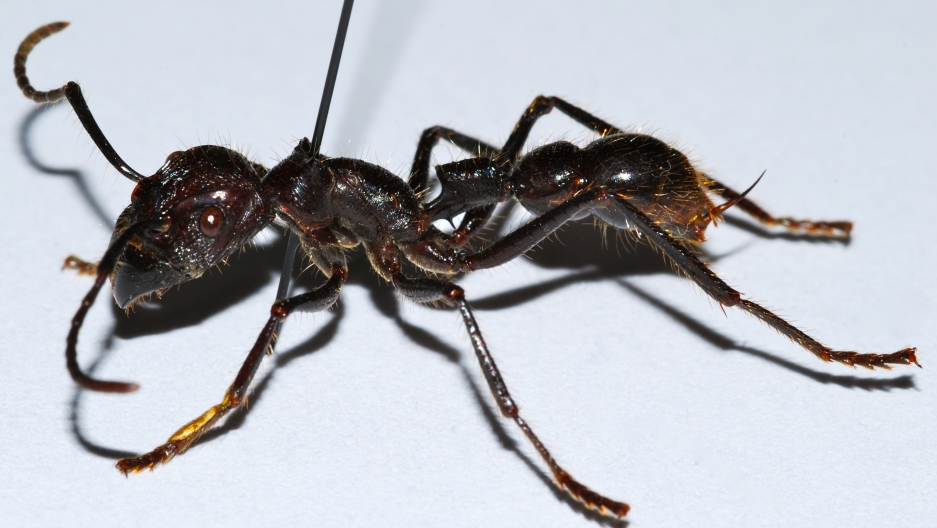 A Bullet Ant, the world's most painful insect.

If you’ve ever been bitten by a Bullet Ant, then you’ve experienced a “pure, intense, brilliant pain. Like walking over flaming charcoal with a three-inch nail embedded in your heel.”

Fortunately, you probably have never encountered a Bullet Ant. But Justin O. Schmidt, a biologist at the Southwest Biological Institute has. In fact, he has been bitten and stung close to a thousand times by a wide variety of painful creatures.

Schmidt has gathered all this data in a new book called "The Sting of the Wild." He is also the creator the Schmidt Sting Pain Index, an entertainingly original way of measuring and describing the relative pain insects inflict on humans and other animals. (Check out this cool graphic of the pain index created by Atlas Obscura.)

Schmidt ranks each insect sting on a scale of one to four, with four being the most painful. He also describes each sting with evocative, even poetic, language. The Sweat Bee, for example, which ranks as a one on the pain scale, feels “Light and ephemeral. Almost fruity. A tiny spark has singed a single hair on your arm.”

“I realized that most of us don't think in terms of numbers. We think in terms of images and art and beauty and song,” Schmidt explains. “That's the way our species communicates and really understands things. So, I thought, 'Wouldn’t it be fun to try to apply this as kind of an artistic equivalent?’”

Schmidt says most of the stings he received — and virtually all of the really painful ones — haven been unintentional, because he’s “far too much of a chicken for that.”

“They've been in the heat of the battle, like with the Bullet Ant,” he explains. “I was in Brazil, busily digging away and I simply got overwhelmed — dozens of them coming out, very agile and fast. You can’t catch them or dodge them quickly enough and you get stung.”

Schmidt isn’t a crazy masochist. He is trying to understand the evolution of social behavior. Ants, wasps and bees are social creatures that all face a similar problem: how to protect themselves, their brood or their honey, in the case of bees, from predators. He hypothesized that a sting is the only effective defense these creatures have.

“Imagine something 50,000-times bigger than you, like a lion, attacking. How are you going to possibly defend yourself? By scratching, kicking and and yelling? No, you can’t,” Schmidt says. “But if you have the equivalent of a bazooka or a rocket, then you can. And that's kind of what a sting is.”

Schmidt found pretty much what he had predicted: The more a colony has at risk — that is, the more individuals in the colony and the greater threat of predation — the more pain the insect inflicts and the greater the toxicity of its venom. “If you can do damage, that’s an extra bonus, in addition to making the predator go away,” Schmidt says. “That’s important, because think about pain: It’s really just an indication of damage. It's not actually damage, and smart predators learn that. Take your local beekeeper, for example. He gets stung all the time and he knows it's just all in a day's work, no big deal.”

Schmidt uses the honeybee as a reference point for his scale. Almost everyone has been stung by one, which makes it a handy way to “normalize” a subjective experience. I can’t know how much a honeybee sting hurts you, nor you me; but if we agree that a honeybee sting is a two, then, if we both get stung by something else that hurts more or less than the honeybee sting, the relative difference should be similar.

While all of these insects share a common ability to inflict pain, they all have a unique chemical formula for their venom, Schmidt says. They’re convergent on the same effect — they really hurt — but they've gotten there by different routes.

“It's really almost eerie,” he says. “Honeybees have a peptide called melatin, which is an entirely different chemical structure from wasps. Wasps have kinins, similar to the cardiac stimulant our body naturally makes. Harvester Ants have another totally unrelated peptide. The Bullet Ant is completely unique to science: it has a poneratoxin. So, all these venoms are not related at all chemically, yet they converged on the same solution of making pain.”