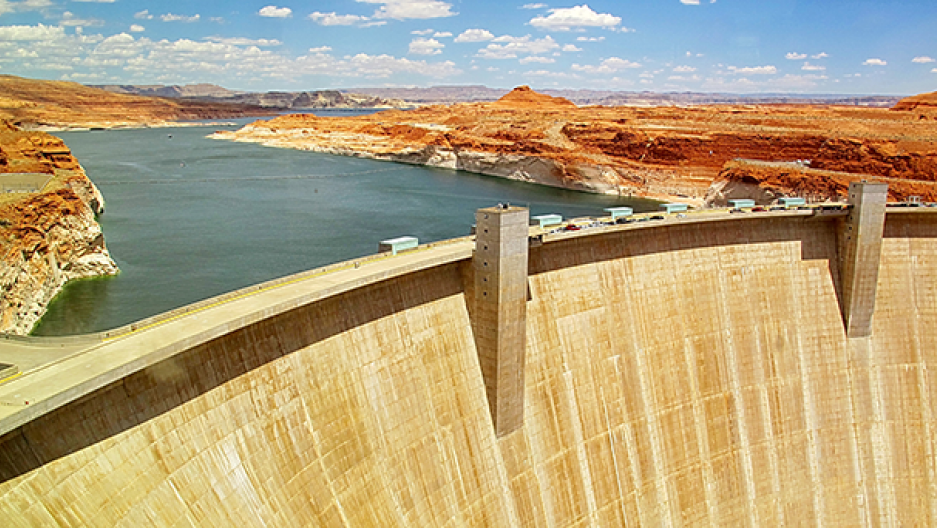 Glen Canyon Dam, with Lake Powell behind it.

The terrible drought afflicting the American West has sparked soul-searching about water management in the region. For the first time in many decades, the viability of dams and other infrastructure that supply water to cities and farms throughout the region has entered the conversation.

Abrahm Lustgarten, a reporter for ProPublica, has written a new story about one of the largest dams in the US, Glen Canyon, and a recent push to open up its gates. It’s a remarkable development, he says, given how important the Colorado River dams — Glen Canyon, with its reservoir, Lake Powell, and Hoover with Lake Meade — have been for the development of the West.

In the early 1900s, the US government started building dams up and down the Colorado River to harness its water and distribute it far outside the river's natural course — hundreds of miles into Arizona and California. The dams, particularly the Hoover Dam, were also intended to control the torrential floods that would come downstream in big water years.

“Glen Canyon Dam was built in the 1950s, at the tail end of this building spree,” Lustgarten explains. “The upper basin states on the Colorado River — Wyoming, Colorado New Mexico, and Utah — were worried that the lower basin states — California, Arizona and Nevada — were taking too much water and were growing too fast, and they basically wanted a gate. Glen Canyon Dam was built as their way to hold back water so they wouldn't have to give more than they were legally required to those states in the south.”

Now, given the realities of climate change and a drought that shows no sign of abating, the reservoir at Lake Powell may have outlived its usefulness, Lustgarten says — especially given the amount of water that is lost to evaporation.

“The big dams on the Colorado River were built to save water, but because the water is spread over such a large area in such a hot and dry environment, an enormous amount evaporates off the surface,” Lustgarten says. “That didn't matter so much in the past, but as water becomes more and more scarce, that loss is significant enough to make a real difference.”

Lake Powell loses about 350,000 acre feet of water each year to evaporation. Combined with the amount of water that seeps out the bottom of the lake — an additional 380,000 acre feet — that’s enough to supply about nine million people with water each year — roughly the population of the city of Los Angeles. Lake Mead loses a similar amount and so do each of the reservoirs up and down the Colorado River system, Lustgarten notes. “When you add all that up in a system that is [already] over-allocated every single year, you see an inefficiency that could add roughly 30 percent more to the river's flow.”

There are no easy ways to address this inefficiency, Lustgarten says. But what’s changing the discussion is the fact that both Lake Powell and Lake Mead are essentially drying up.

“Lake Mead is now about 37 percent full. Lake Powell is just a little bit less than half full,” Lustgarten explains. “Both reservoirs still lose an enormous amount to evaporation and they're not functioning at their full capacity, in terms of the power they generate or the amount of water that they hold. So the ratio of inefficiency to benefit has changed substantially over the last decade or so of drought.”

A proposal from an environmental organization called the Glen Canyon Institute suggests combining the two reservoirs. If they are both half-full, their reasoning goes, then empty Lake Powell and combine it with Lake Mead. The region would not lose the water, but send it 300 miles downstream and re-collect it in one full, large reservoir. This would significantly decrease the amount of water lost to evaporation, and increase the power generating capacity of Hoover Dam, which helps make up for the loss of power generation at Glen Canyon dam. An added bonus is the opportunity to restore the landscape of Glen Canyon.

Most of the resistance to this idea comes from the upper basin states, according to Lustgarten. They say removing Glen Canyon Dam would require a renegotiation of the Colorado River Compact — a legal agreement to send seven-and-a-half million acre feet of water down to the south every single year — congressional approval and an involved bureaucratic process. What that really means, Lustgarten says, is that they don't want to lose hands-on control over their water.

Legal experts Lustgarten consulted suggest that both the upper and lower basins could share the water out of Lake Mead. “It doesn't have to continue in the traditional role of serving only the southern basins,” he explains. “The accounting for the water could still happen at a place called Lee's Ferry, where it happens now, just below the site of the Glen Canyon Dam.”

So how realistic is it to think of opening the gates of the Glen Canyon dam in the face of political pressure from states upstream? The short-term answer from deputy secretary of interior Mike Connor, the person ultimately in charge of water in the West, is not very; this is not something that is going to happen anytime soon.

Nevertheless, Lustgarten says, a conversation seen as laughable just a few years ago is now taking place in a serious way. The idea of a dam not suiting its original purpose is a topic that can now be broached, he says.

Whatever happens, or whenever it happens, the bottom line is that “the Colorado River will never be sustainable until the amount of water the states take from it matches what is naturally available,” Lustgarten says. “If that doesn’t change, if the states continue every single year to draw more water than flows out of it, then these reservoirs are going to drain. It could take another ten years it could take another two years, but they’re going to drain to the bottom.”