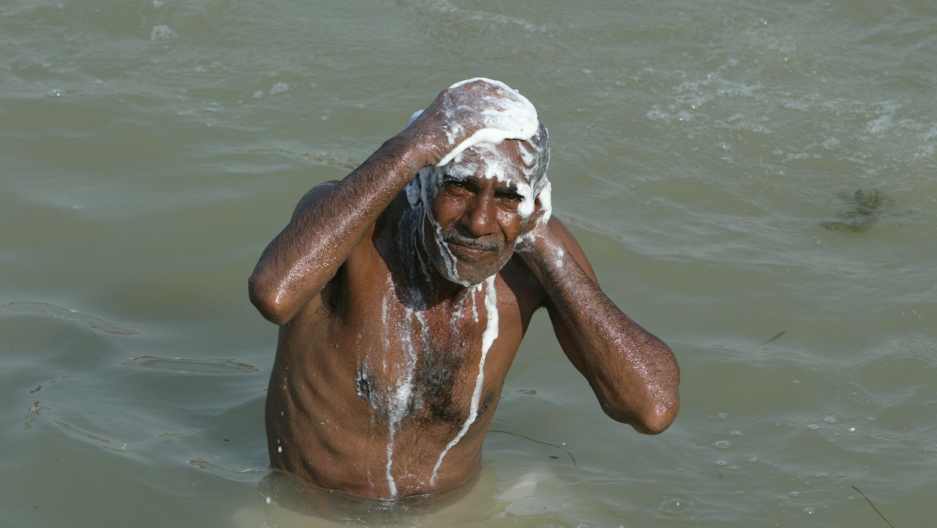 An Iraqi man bathes himself in a canal in Iraq's second largest city Basra, during a previous electricity cut off, August 11, 2003.

Iraqis in the 120-degree heat of Basra were in no mood for rolling blackouts. When the power failed, taking down their air conditioners, many called authorities to complain.

But this was no accident. Three Turkish electricity barges in the harbor had just cut their feeds to the Basra power grid.

Iraq has rented electricity barges from Turkey for nearly a decade. Operated by the Karkey Company, the barges burn oil pumped in Basra to generate up to 400 megawatts of power to augment Iraqi power plants. The rental generators help authorities keep up with electrical demand, which can be especially high in the summer.

Basra Governorate, at the center of Iraq's oil industry, does not run its own power plants, nor does it get to decide what becomes of the oil it pumps. That's the purview of the Iraqi central government in Baghdad. And it was Baghdad's failure to pay Karkey's $85 million bill that caused the company to pull the plug on Basra the last Monday in June.

This was not the first time this year that Basra has lost power over an unpaid bill.

Neighboring Iran, which also supplies electricity to Basra, interrupted service in April when Iraq's electric bill had reached nearly $700 million. Iran switched on the power again only after a Baghdad delegation traveled to Tehran.

This time the governor of Basra, Majid al-Nasrawi, did not wait for Baghdad to step in, says Ben Lando of Iraq Oil Report, which broke the story. "Basrawis are so frustrated," Lando says. "When you add in fasting during Ramadan and scorching temperatures and maybe some lingering sectarian nationalistic tension between Iraq and Turkey ... something had to give."

Action was swift. "The governor decided he would forcibly take over the Turkish power barges if they didn't begin operating again," says Lando, "and he led a team to one of the port areas where one of the barges was located, and essentially forced them into restarting."

Basra's residents got their power back the next day.

But with global oil prices at historic lows, Iraq will continue to be short of cash, and the country will likely be running up more electric bills in the future. Which could mean more power cuts in Basra.

If that happens, Lando says, "Iraq's Finance Ministry and Electricity Ministry will have to decide how to spend their limited budget. What Basra gets to decide — what its governor gets to decide — is what steps to take now that the warning shot was heard."

Given the Iraq government's record with electricity suppliers, this may be an especially uncomfortable summer for Basrawis.