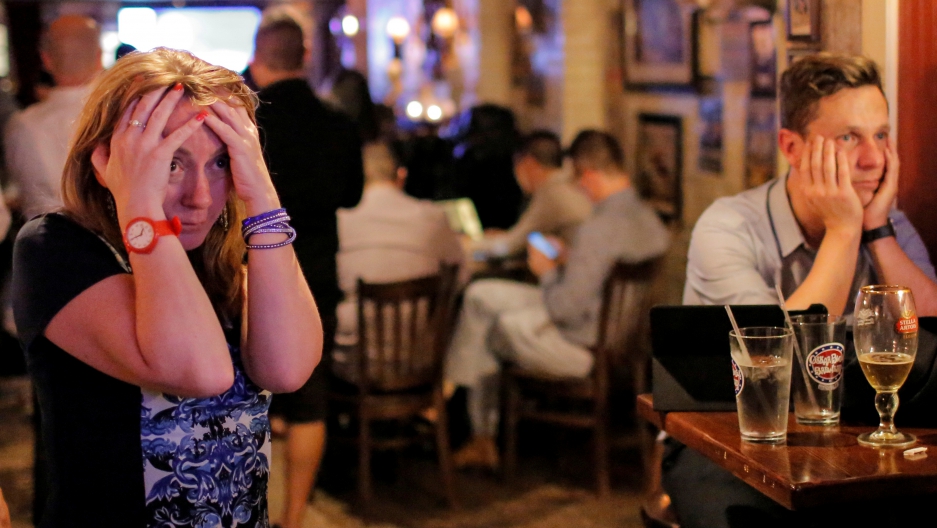 People gathered in The Churchill Tavern, a British themed bar, react as the BBC predicts Britain will leave the European Union, in Manhattan.

A video kept popping up in my newsfeed after the United Kingdom’s vote to leave the European Union.

In the clip, a distraught-looking man is speaking with BBC reporter Victoria Derbyshire. He didn't vote in the "Brexit" referendum — but he says he can't believe the results.

Well, he sure was wrong about that one. And if he's feeling some regret over his pre-vote attitude, he's not alone. A collective Brexit hangover has afflicted the UK since last Thursday's referendum.

On social media, the terms “bregret” and “regrexit” started trending soon after the results came in showing a win for the "leave" campaign. Some people who cast a ballot regretted their choice almost immediately. Like the woman who told ITV news: "Even though I voted to leave, this morning I woke up and I just — the reality did actually hit me. If I'd had the opportunity to vote again, it would be to stay." A petition calling for the government to hold a second EU referendum has gathered more than 4 million signatures in the last week.

Hey, everyone makes mistakes. Even in the voting booth. And many studies say that when you're sad, listening to music will help ease the pain.

So while we wait to hear about that second chance at voting on Brexit, we've got the perfect thing to help you cope: a playlist of songs by artists who regret making them. You won't be sorry for listening, though. Most of the songs are pretty awesome, or at least awesomely bad.

Here is your ultimate regrexit soundtrack.

If there's one lesson to take away from this playlist, it's that musicians should never write songs out of spite.

That's what happened to Jani Lane, the frontman of the American glam metal band Warrant. The story goes that Lane wrote "Cherry Pie" only after the record label told the band they were worried the album didn't have a clear hit single. Lane wrote the song in one night. And he hates it.

"Fight for Your Right," Beastie Boys

The song "Fight for Your Right" was originally meant to make fun of party anthems and the wannabe teenagers who tended to listen to them.

But that fact was lost on pretty much everyone.

Instead, the crowd they were making fun of fully embraced the song. It got so bad that the Beastie Boys refused to play it live, and in the liner notes on their greatest hits they wrote of the song: "It Sucks."

"The only thing that upsets me is that we might have reinforced certain values of some people in our audience when our own values were actually totally different," Michael Diamond, the vocalist and drummer for the group, said about the song. "There were tons of guys singing along to ‘Fight for Your Right’ who were oblivious to the fact it was a total goof on them."

Every person who has had to sit through a terrible cover of "Wonderwall" at a party is probably sick of it. Liam Gallagher, the lead singer of Oasis, doesn't like the song much either.

In 2008, when MTV asked Gallagher about the band's newest album, he said: "At least there's no 'Wonderwall' on there. I can't f**king stand that f**king song. Every time I have to sing it I want to gag."

It seems that — like many people — Gallagher has just heard the song too much.

"Problem is, it was a big, big tune for us," he says. "You go to America and they're like: 'Are you Mr. Wonderwall?' You want to chin someone."

Of all of the artists on this list, Radiohead's Thom Yorke probably hates his song the most.

Yorke famously rechristened the song "Crap" and has refused to play "Creep" live, telling one concert-goer in Montreal to "f*** off, we're tired of it." He's said in multiple interviews that Radiohead "sucked Satan's c***," when they spent months touring through the US playing the song. By the time they got back to England, they had become skittish about recording anything.

"As soon as you get a success you disappear up your own arse and lose it forever," he said. "When I got back to Oxford I was unbearable. You start to believe you're this sensitive artist who has to be alone — this melodramatic, tortured person — in order to create music. The absolute opposite is true."

This might surprise people who assume that "Stairway to Heaven" is the greatest song ever written (lookin' at you, Dad), but Robert Plant, the lead singer of Led Zeppelin, hates it.

“I’d break out in hives if I had to sing that song in every show," he said. "I wrote those lyrics and found that song to be of some importance and consequence in 1971, but [years] later, I don’t know. It’s just not for me.”

Plant even donated $1,000 to a Portland, Oregon radio station that promised to never play it again during a pledge drive.

Er, how much would you pay us, Mr. Plant?

Listen to the full playlist here:

There are more songs on this playlist, but I'm sure I'm missing many others. Suggest them in the comments below!