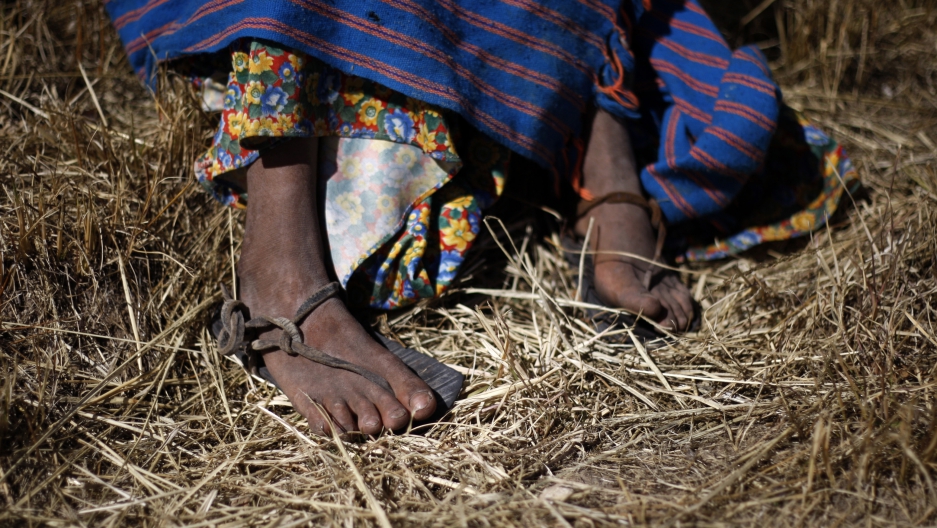 The feet of a Tarahumara girl in Guachochi, in northern Mexico.

In the canyons of northern Mexico's Sierra Madre Occidental reside some of the fastest runners in the world: the indigenous Tarahumara population, who call themselves the Raramuri.

"Raramuri" means "foot-runner" or "those who run fast" in their native language.

This indigenous group excels in running competitions worldwide. But to the authorities, they're becoming known for something else: Narco-traffickers have been exploiting them to smuggle drugs to the US. Between 2010 and 2015, the number of Raramuri arrested at the US-Mexico border doubled from 50 to 100 detainees.

Though this is a problem the Raramuri community has been dealing with for more than two decades, it has gone largely unreported in international media.

Randall Gingrich is director of Tierra Nativa, a Raramuri social and environmental advocacy organization. For 25 years, he has advised and supported Raramuri communities, and for 16 years lived with them in Guadalupe y Calvo municipality, which he says is one of the most violent drug-producing regions in the Sierra Madre.

A number of factors make the Raramuri vulnerable to local drug cartels.

"There's no jobs in the Sierra, [the Tarahumara] have been pushed out of the best lands for the most part, and it’s a semi-arid environment anyway," Gingrich says. "And climate change has resulted in these devastating droughts that last months and sometimes even years. So these Tarahumara have no choice to survive but either to migrate out of the region or to stay and grow drugs."

Dale Taylor is a Tarahumara dialect translator, who lived among the indigenous group in the village of Caborachi in northern Mexico's Chihuahua state for 15 years. 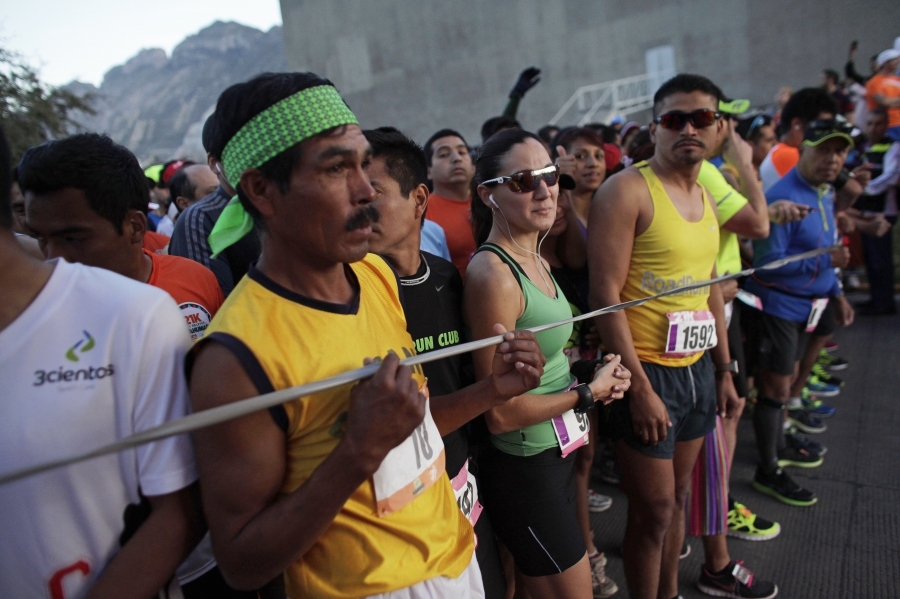 A Tarahumara man, front left, and other runners get ready to compete in a 21-kilometer race in San Pedro Garza García, on the outskirts of Monterrey, Mexico on Feb. 16, 2014. According to local media, the half marathon was a fund-raiser for Tarahumara community development programs.

He describes the Raramuri as a simple, spiritual, family-oriented, agricultural people, who aim to live in peace and harmony with nature.

“Their whole life revolves around the earth and the environment,” Taylor says.

But with the introduction of tree logging into the Sierra and now drug cultivation, trade and violence, the Raramuri's lifestyle has been significantly affected.

"What [I] found 25 years ago were communities that were terrorized by basically local drug traffickers who were trying to control the logging, and take over their lands, in some cases forcing them to grow drugs," Gingrich says. "But mostly the relationship between the drug traffickers and the Tarahumara is consensual. ... Because even a really well-meaning traditional family might only be able to produce 20 percent of the food it needs through traditional agriculture. So it's a very complicated problem."

Today Gingrich estimates 15 to 20 percent of the entire Raramuri population is involved in the drug trade.

"In some communities it'll be 90 percent and in other communities, it'll be 2 or 3 percent," he says. "So it's very variable."

Impressionable young Raramuri men are the typical targets of recruitment. Gingrich says they are lured in by local dealers who socialize with them, developing friendships. Then the dealers invite them to spend more time with them by doing tasks near the borderlands that can make them money, downplaying the dangers of the job.

While the Raramuri are used to the mountainous canyon land of the Sierra Madre, Gingrich says they are not used to desert terrain toward the borderlands. 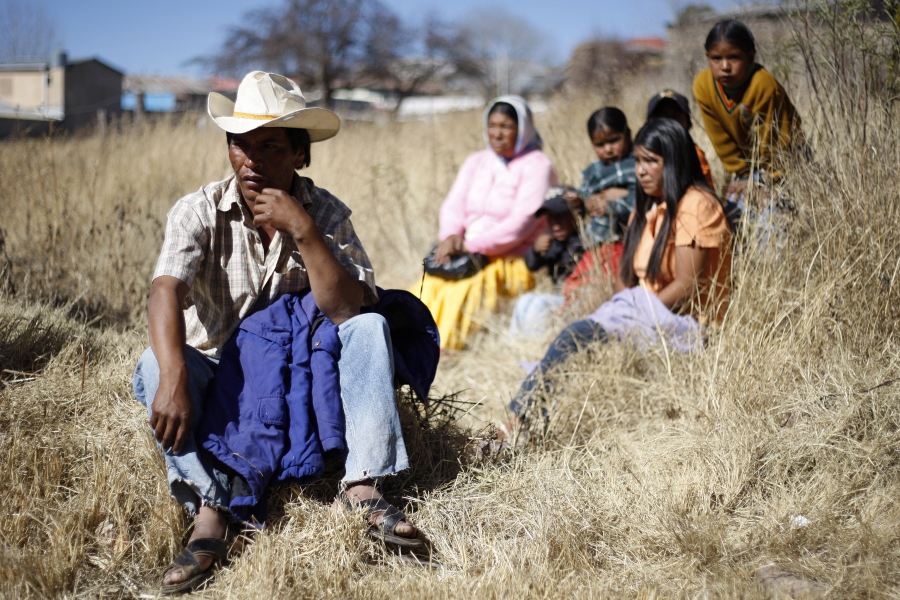 A Tarahumara indigenous family sits together in Guachochi, in northern Mexico's Chihuahua state.

"They're not all ultra-marathon runners," says Gingrich. "They're exceptionally strong and in great physical condition, but that doesn't mean they're physically ready to put on a hundred-pound pack and hike across extreme deserts that they've never seen before in their life, facing unknown dangers.

"They may be able to survive the physical endurance, but they're deeply scarred from the experience."

While there are other Latin American communities affected by drug trafficking, Gingrich says the Raramuri's situation is different because in the past, they had little contact with the modern world.

"They have a low population density in the Sierra," he says. "If you get into Central America, you're talking about very high population densities and regions that were affected by US-style gang activity that was actually learned by migrants who migrated into Los Angeles, and other parts of the United States, back in the '80s and '90s. So you have a very different culture. You have cultures that were militarized previously, that were involved in revolutions, you know, very high levels of military and police repression. And during those years the Tarahumara were largely free."

Gingrich says the Raramuri who are given jail time for their crimes are getting what he thinks are heavy prison sentences for people of their circumstances.

"When I looked into this, I mean, some of the Tarahumara are receiving relatively long sentences," Gingrich says. "You know, six or seven years for transporting drugs."

But Taylor, who has served as a translator on nearly a dozen cases, says from what he’s observed, the Raramuri are generally given light sentences, serving minimal jail time — just a few months, sometimes weeks, before being deported.

“Their main concern is to get out and home as soon as possible,” Taylor says. “They are told that if they plead quickly, they will get a reduction of time and so they usually do.

“I’ve seen a lessening of their sentences because [the courts] don’t know what to do with them. They just want to get [the Raramuri] in and out, realizing that in some cases they are ignorant to what they are doing. ... The circumstances of the case will determine, you know, obviously, whether the penalty is harsher or not.”

In any case, the Raramuri are handicapped when it comes to defending themselves because many are not fluent in Spanish and only speak one of their various native dialects. Taylor is one of few Tarahumara translators available in the US.

It is only recently that US prosecutors have begun reaching out to the Mexican government to retain translators from Chihuahua. But these services are only reaching a handful of those jailed, says Gingrich.