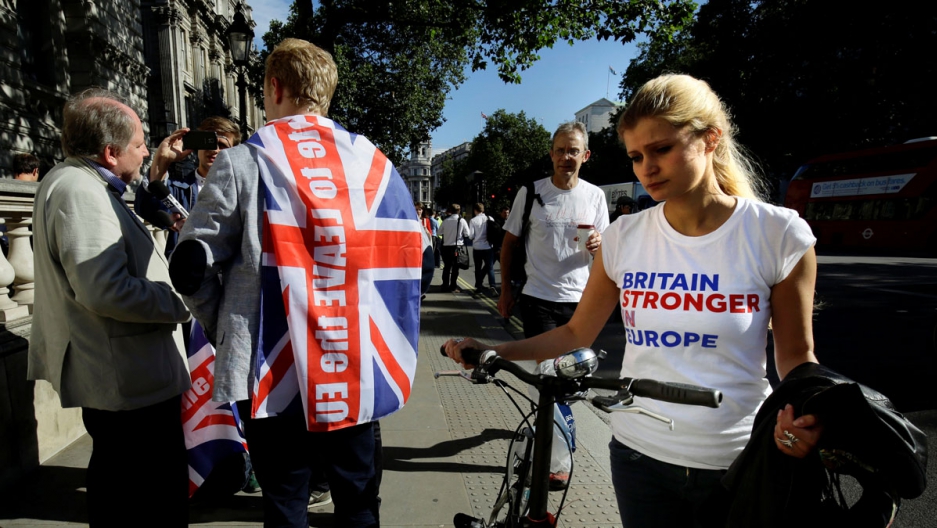 A vote remain supporter walks past a vote leave supporter outside Downing Street in London after Britain voted to leave the European Union.

Britain’s relationship with things European has long been a complex and confusing one. As a Brit living in the US I get asked about it a lot.

Twenty years ago it was actually my job try to bring some sense of order to that confusion. I was living in London, running a BBC radio program called Euro News, broadcast each weekday on the national news and sports network, Radio Five Live. The Maastricht Treaty that created the European Union had been signed just four years earlier. It was a transformational time.

The grand plan for an integrated Europe had a road map and a structure and we had a shared identity. Britons were no longer just subjects of the crown, they were newly minted Citizens of Europe, with European passports to show for it.

Questions abounded and much was unknown about what lay ahead. The plan was for a single European currency. We knew the UK wouldn’t be a part of that. But what of all these new European rules and regulations? In the infancy of the internet, when few people had access to the web, we launched a weekly feature imaginatively called the Euro News Euro Advice Line (we tried to say Euro as much as we could).

Much of the conversation in the media at that time was about European identity and what it means to be European versus being British, often neatly summed up at the time by blue passport (British) vs burgundy (EU) passport debates. But our callers were more interested in practical matters, such as how many bottles of wine they could bring in from France (as much as they wanted as long as they intended to drink it themselves), whether they would need to show a passport when traveling between France and Spain (no), or whether they could up sticks and move to Italy (yes).

While politicians and the popular press railed against EU legislation regarding the curvature of bananas or the size of kumquats, our audience seemed more concerned with practical matters about how they could make the most of the European experience. The need for our radio show seemed keenly felt.

I co-authored a guide that was sent to all BBC news producers wittily titled “EU What?” It had handy hints like “Remember the European Court of Human Rights is not an EU institution.”

Even with closer integration Britain managed to hold onto some things it held dear. Milk and beer continued to be sold in imperial pints, distance was measured in miles, Britain didn’t join those countries in the Schengen community with passport-free borders for EU citizens. But then Britons found themselves buying Cheddar cheese in grams, petrol in litres, and plumbing services from Polish immigrants.

The events of the past 24 hours are more than about milk and beer and Polish plumbers. They are about identity and (in the years ahead) practical matters like the color of passports and imported wine.

In these uncertain times, it’s worth remembering that it was also complex and confusing 20 years ago. But this time, I am being asked a lot of questions to which I don’t have answers.

Suffice to say that a few years after Euro News got canceled, due to a lack of interest, Europe just got very interesting again.

Jonathan Dyer is managing editor of PRI's The World.