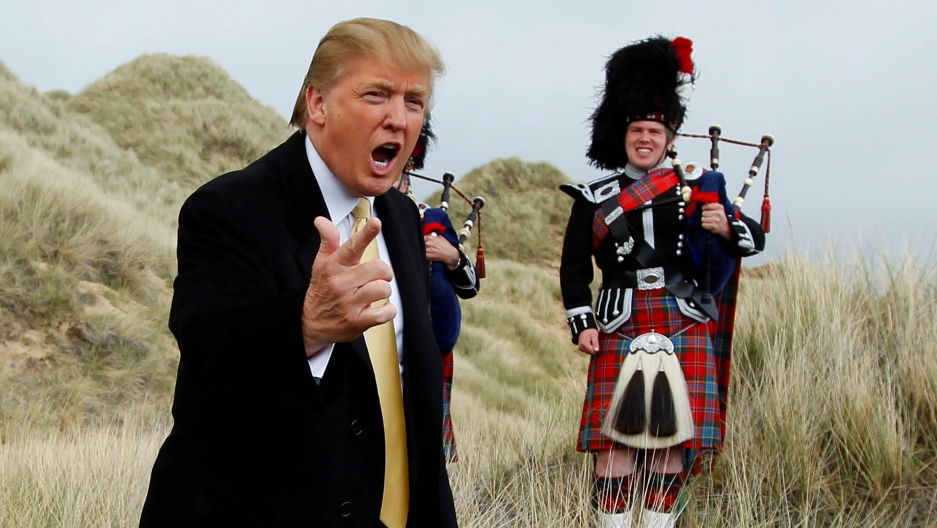 Donald Trump gestures during a media event on the sand dunes of the Menie estate, the site for his golf resort, near Aberdeen, Scotland, May 2010.

President Barack Obama responded to the Brexit vote with reassurance.

Hillary Clinton also alluded to "steadfast commitment" to the special relationship with Britain.

“We also have to make clear America’s steadfast commitment to the special relationship with Britain and the transatlantic alliance with Europe,” she said in a statement on her website.

“Enduring” and “steadfast” are key words. Our special relationship with the UK is one that goes back centuries of course to the days when the US was a British colony.

“But really when you think about it, World War I and World War II cemented the relationship between the two English-speaking peoples,” says Ivo Daalder, Obama's ambassador to NATO from 2009 until 2013.

And no matter what was decided by the Brexit vote, the continuation of this special relationship is important to American interests, says Daalder. And most importantly, Brexit will not change the UK’s involvement in NATO, he says.

“It complicates things but the challenge for statecraft is to take the cards that you’re dealt and make the best deal out of it,” Daalder says.

One way in which it complicates things is by weakening British Prime Minister David Cameron’s role in NATO in the upcoming summit next month in Warsaw.

“David Cameron, who has said that he will resign, will not only be a lame duck but will be a defeated lame duck,” Daalder says. “The voice of Britain, which used to be strong and important alongside the US in NATO, that voice will be a little weaker.”

Just arrived in Scotland. Place is going wild over the vote. They took their country back, just like we will take America back. No games!

But Brits were quick to respond. Among those the pop star, Lily Allen.

@realDonaldTrump Scotland voted IN you moron

All 32 voting areas in Scotland voted to remain.

But looking at Trump, despite his misrepresentation on the voice of the Scottish people, is a good way to look at Brexit. Both campaigns have plenty in common.

"Oh definitely, it's some of the same language," says John Cassidy of the New Yorker. "In fact, Nigel Farage, the leader of the [UK Independence Party] and one of the leaders of the 'leave' campaign, talked about putting 'The Great back in Great Britain.'"

Cassidy has written about the similarities. He says it's important to remember when talking about nativism and racism in politics is the driver behind it.

"Healthy democracies where people have rising living standards don't tend to fall for political ideology," he says. "There's obviously some people who are attracted to it, but it's usually a minority, a pretty small minority. What tends to convert extreme right-wing populism to mass movements are economic problems or wars or some sort of cataclysm."

Cassidy says there really hasn't been a big cataclysm in the UK. "It's just a steady assault of the working class from globalization, automation and the influx of immigrants as some would argue," he says.

"That's just provided a sort of backdrop of resentment and increasing economic anxiety, which clever politicians like Nigel Farage have exploited to their own advantage and diverted these anxieties into anti-immigrant rhetoric."

That said, we should be careful about putting too much in the Trump and Brexit campaign comparison, Cassidy says. A lot of the popularity for the "leave" side was powered by the notion that Britain is simply better than Europe.

"You can't say that if the 'leave' campaign scored a victory, the Trump campaign will score a victory."