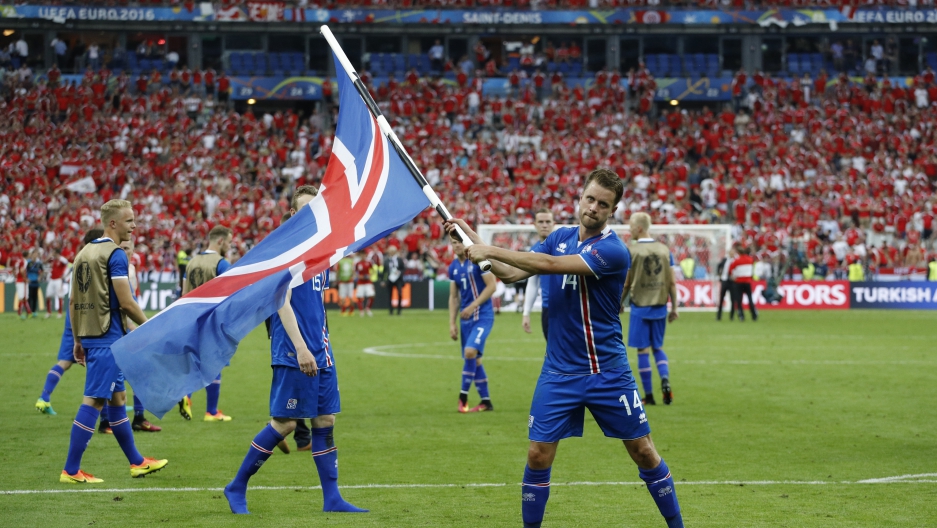 It all starts with a warning.

Deep in the bowels of the earth, an ancient power stirs. Eiður is warming up. #ISL #Euro2016

And it keeps getting better.

The Reykjavík Grapevine's Twitter feed has become a gold mine for the Euro 2016 soccer tournament — a mix of ancient Icelandic culture with old-fashioned trash talk. The result has the world laughing and falling in love with Iceland.

The person behind the English-language magazine's Twitter presence is John Rogers. He's an English immigrant who lives in Reykjavík. And he says the tone of the tweets wasn't pre-planned or part of any social strategy for covering the tournament.

"It was all very spontaneous," says Rogers. "When the match started I just opened Twitter and could feel the atmosphere downtown, and I just decided to use this slightly Viking parody with a booming voice."

The feed really got going during a match that pitted underdog Iceland against powerhouse Portugal. The teams played to draw. Portugal's Cristiano Ronaldo, one of the best players in the world, left the field pouting.

Perfect fodder for the feed.

This rain we're getting in Reykjavík might be from clouds of pure #RonaldoTears? It's bitter and yet so sweet... #Por #Isl #PORISL #PORAUT

You can read the tweets as a love letter to a national team punching above its weight. Iceland is a tiny Nordic nation going up against the soccer giants of Europe. But the entire country is behind the team. After a dramatic late victory over Austria on Wednesday, fans held an impromptu carnival in downtown Reykjavík. Even the mayor is losing his head over the victories.

The gods are also being rewarded. Rogers asked for people from around the world to offer up beer and food sacrifices to the god Odin as a way to help Iceland's team. "We got hundreds of responses," he says.

Iceland will play mighty England in the next round. Rogers thinks it will be an interesting game. "We'll see if England, with their superior technical skill can stand up against Iceland's superior passion," he says.

Iceland are once again the underdogs. But as we now know, they've got a not-so-secret weapon: Thor.

Perhaps #ENG will reconsider this Brexit idea when they realise they #ISL longships are coming and call for allies. #ICELANDSMITES #Euro2016