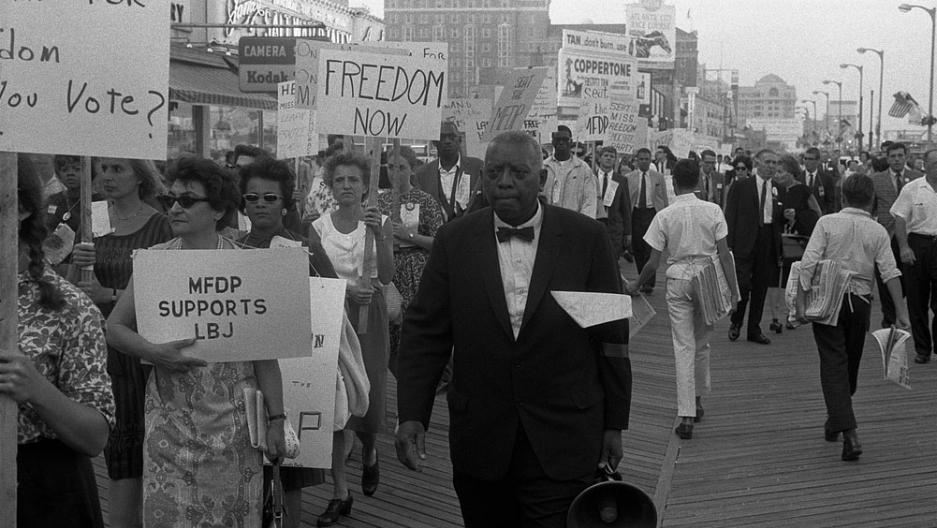 In May, the US Department of Education sent a letter to school districts across the country clarifying that Title IX, which prohibits sex discrimination in schools, applies to transgender students — most notably, their right to use the bathroom that matches their gender identity.

The letter brought backlash from many quarters. But some of the harshest came from my home state of Mississippi, which has a long and brutal tradition of fighting the expansion of civil rights. Declaring his opposition on Facebook, Governor Phil Bryant chose language that evoked the ugliest ghosts of the state’s past:

Because these decisions are better left to the states, and not made at the point of a federal bayonet, Mississippi’s public schools should not participate in the president’s social experiment.

Throughout Mississippi’s history, political leaders have masked social anxieties with cries of “states’ rights.” Governor Bryant’s statement could easily be read in the voice of Ross Barnett, the governor whose 1962 confrontation with President Kennedy over the desegregation of the University of Mississippi required the deployment of 30,000 federal troops carrying tear gas, rifles, and, yes, bayonets.

The governor’s response exemplifies a troubling reversion to the politics of exclusion and defiance that once made Mississippi a national pariah. Despite abundant progress over the past half-century, two recent political decisions have again brought widespread condemnation upon the state.

After Governor Bryant signed HB 1523, singer Bryan Adams and comedian Tracy Morgan canceled shows in Mississippi. Corporations with operations in the state, such as Nissan and Toyota, and those without, such as Microsoft and IBM, spoke out against the law. The governors of New York, Vermont and Washington banned nonessential state travel, and many hotels reported canceled reservations. The National Collegiate Athletic Association, which had already banned Mississippi from hosting postseason competitions until the Confederate emblem is removed from the flag, recently added LGBTQ nondiscrimination as another condition.

First, in January, the legislature refused to remove the Confederate battle cross from the state flag. Then, in April, it passed HB 1523, a bill that permits certain types of anti-LGBT discrimination by government officials, religious organizations, adoptive and foster parents, schools and business owners. The law, which has already drawn three federal lawsuits, has been called the most sweeping assault on LGBT rights in the country.

These tactics are understandable, given their effectiveness in other states. The prospect of economic reprisal compelled conservative governors in Georgia and Arizona to veto discriminatory religious freedom bills. The influence of major corporations factored into the South Carolina legislature’s decision to remove the Confederate flag from the statehouse grounds in the wake of the church massacre in Charleston last year. From an outside vantage point, it stands to reason that Mississippi, less populous and prosperous than those states, would be even more vulnerable to coercion.

In reality, the opposite is true. Mississippi is among the most economically and socially isolated states in the country. It is still dominated by small communities and big families, which lend themselves to intimate familiarity and fierce insularity. Those qualities provide our political leaders a layer of insulation from outside pressure.

Even though the opposition to HB 1523 has taken the same approach, Mississippi simply doesn’t have enough to lose. It is the only state in the Southeast without a Fortune 500 headquarters. There are no major-league sports franchises, and its cities and venues are too small to host many major conventions and events. The fledgling film industry does not leave a large economic or cultural footprint.

And the young, educated workers who have turned social acceptance into a business imperative in other states only seem to flow in one direction: out. To wield political leverage, out-of-state boycotts and cancellations must carry real economic costs. For instance, after the Georgia legislature passed a bill similar to Mississippi’s this spring, the NFL floated the idea that it might jeopardize Atlanta’s chances of hosting future Super Bowls, and Hollywood studios threatened to pull major film projects, which generated $6 billion for the state economy in 2015. Ultimately, Republican Governor Nathan Deal vetoed the bill.

Efforts designed to impose further isolation on Mississippi, even if pursued in good faith, could backfire. Every broken link with the rest of the country decreases the economic, and thus political, costs for flouting national mores in the future. These efforts also risk strengthening the hand of politicians who claim moral persecution, as Governor Bryant did in a speech on May 26, from the “secular, progressive world” and “their friends in the media.” ­­­

To create the conditions for social progress in the state, we must use a new strategy — or, more accurately, an old one.

As Mississippi’s black citizens fought for equality in the 1960s, the most effective out-of-state allies supported them in person. Instead of boycotting and canceling, they invested and engaged.

Some used their celebrity to bring attention and resources to the cause. Bob Dylan wrote protest songs about Mississippi like “Oxford Town” and “The Death of Emmett Till,” which he performed for activists in the Delta. When Mississippi’s leaders retaliated against civil rights organizers by cutting off food assistance in poor, predominately black counties,

Many more came to Mississippi in obscurity, but their impact was even greater. During the summer of 1964, as many as 1,000 out-of-state volunteers answered a national call issued by local civil rights activists to come to Mississippi. Most of them still in college, the Freedom Summer volunteers descended on Mississippi to support local people organizing for the rights that the state’s leadership had systematically denied to black citizens. The volunteers came from as far away as California and New York — home to Andrew Goodman and Michael Schwerner, who, along with Mississippi native James Chaney, were murdered in Neshoba County by the KKK working in tandem with the local sheriff’s department.

The immediate objectives of Freedom Summer were to register black voters, fewer than 7 percent of whom had been allowed onto the rolls, and establish schools for Black children who, a decade after Brown, were still relegated to a separate and vastly unequal education. But the broader intent was to tear down the walls that had kept Mississippi isolated from the rest of the country. The civil rights organizers understood that a closed society had to be opened from the inside. That lesson applies as much today as it did then.

The federal government’s support was and still is critical to that mission, particularly the robust enforcement of anti-discrimination laws and voting rights. But the pace of progress has always been dictated by the leaders that Mississippians ourselves have chosen. At times, that pace has been rapid. At other times, such as now, it has stalled.

To restart Mississippi’s progress, we need out-of-state partners who will strengthen their ties to the state, not sever them. Condemn the actions of our leaders, but do not write off the state or its people. There is too much good to forsake and too much potential to squander. No matter how intractable things seem now, remember that local organizing combined with national support can produce durable change — in fact, it’s the only thing that ever has.