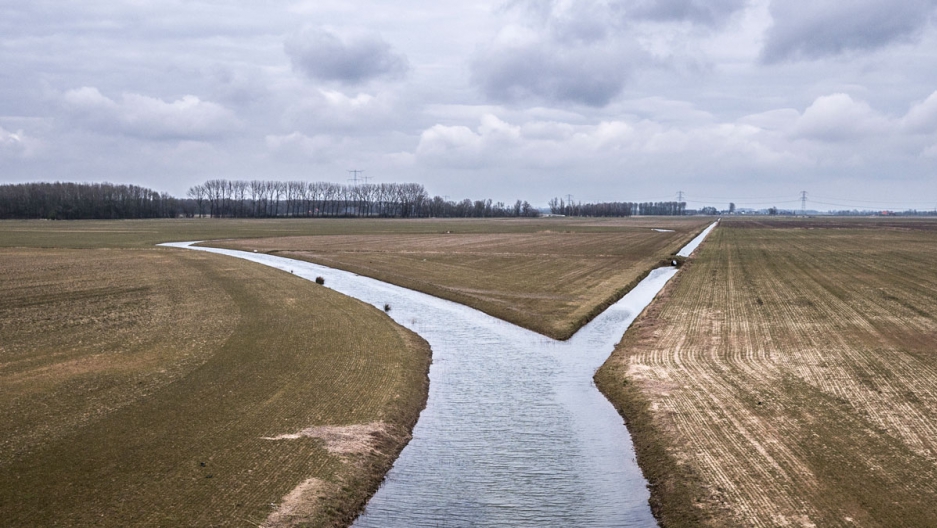 Dikes once protected this area near the Dutch city of Nijmegen from flooding. But under a new policy for managing rising water levels due to climate change, the dikes have been moved back to allow a branch of the Rhine River to broaden out into its historic floodplain. The "room for the river" policy is meant to allow flooding in some areas in order to prevent worse flooding elsewhere.

The Dutch have been the world's experts at building dikes and keeping back water for centuries. Building dikes to hold back high water is pretty much how the country was formed hundreds of years ago.

But the Dutch relationship with dikes is changing. And there’s no better way to see that change than from … atop a dike.

But Schouten, a landscape architect, says that about 20 years ago, those defenses started to crack. 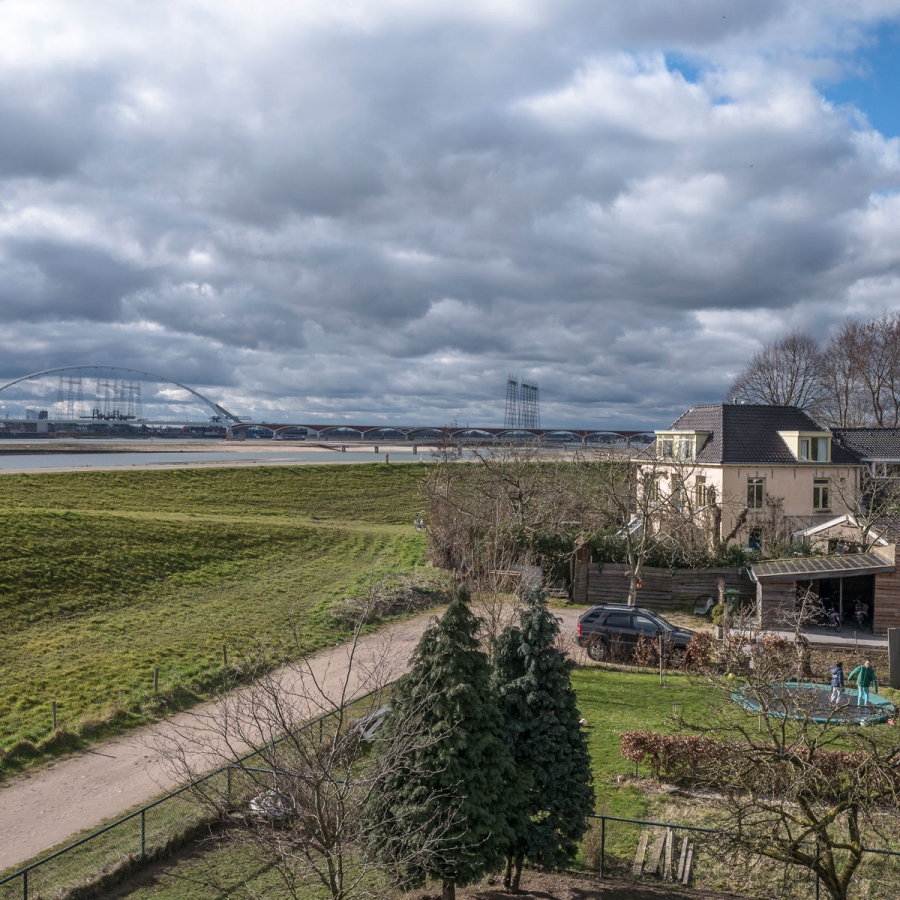 A bird's-eye view of part of the Room for the River project along a branch of the Rhine River in Nijmegen, the Netherlands.

Another wake-up call came in 2000, when new climate change projections showed likely flooding and sea-level rise overwhelming many of the country’s dikes. So the Dutch made a big change. Instead of building higher dikes to defend against water, they came up with a new approach, which they called “Room for the River.”

Basically, the government conceded that it can't avoid flooding from either the rivers or the sea entirely. Better instead, they decided, to try to manage floods by clearing out space for high water.

Here in Nijmegen, that meant moving the dikes back and recreating some of the river’s original floodplain. 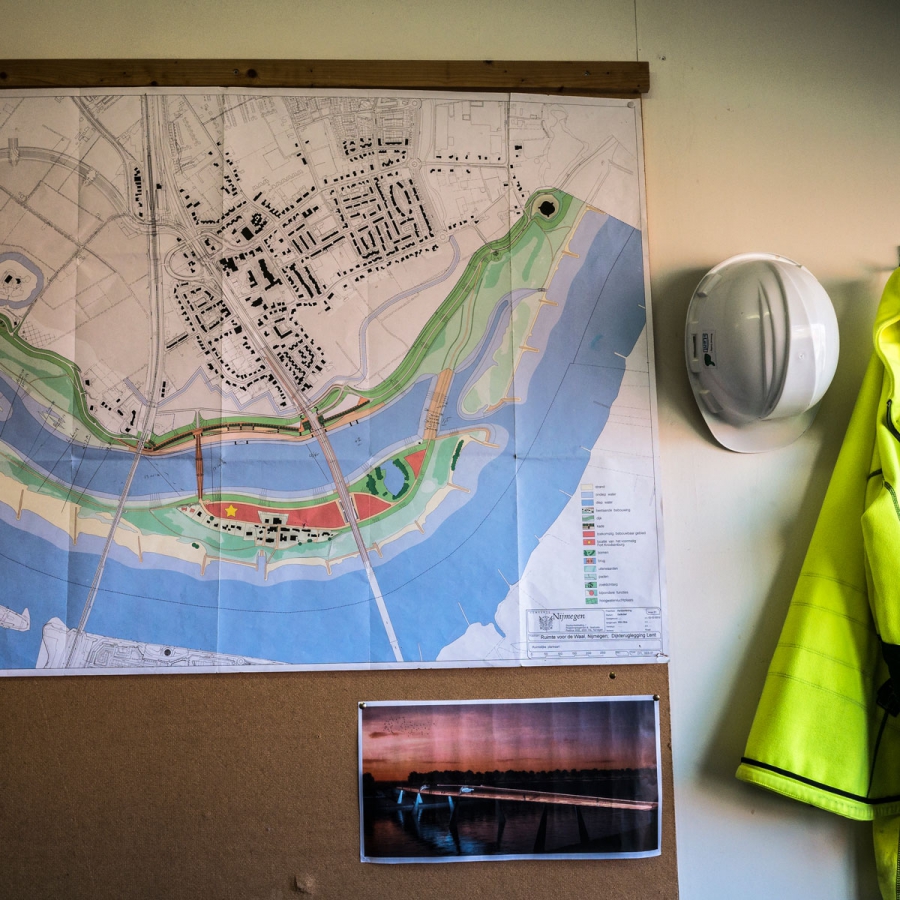 A planning map for the Room for the River project in Nijmegen, the Netherlands.

But the Netherlands is a crowded place. So dozens of families were living in that floodplain.

Schouten says the families behind the dikes dug in their heels, and it took years of negotiations to work out an acceptable plan.

But in the end, he says, “They are the best ambassadors for us yet.”\

How the Dutch are helping New Orleans stay dry

Frank and Monique Pluym are two of those ambassadors. They had a house and an auto body shop in the proposed new floodplain. Three of their four kids grew up there.

“At first we said, 'No, we don’t want it,'” says Frank Pluym, standing on the construction site where his home used to be.

But after 11 years haggling with the Dutch government, the Pluyms took a buyout and moved across the river. They remembered the floods of the ‘90s. And ultimately, they say they got a fair deal for their land.

“All the people here have money from government,” says Frank. “Compensation was good, and all the people built new houses. We built a new house, new garage.”

Monique agrees. The Room for the River project created a huge public park on an island in the river, which the Pluyms look forward to visiting once its complete.

“It was a difficult period but I think most of the people [who] did it, they are satisfied,” she says.

The Pluyms’ new house is just up the road from their old place. It’s bigger and taller. Since it’s still close to the river it sits on stilts. And they say they love their new view of the water and the sky.

Not everyone stayed so close. One family took their buyout money and moved to Italy. The Pluyms adopted that family's cat.

Nijmegen isn’t the only Room for the River project uprooting neighborhoods. Sail down a branch of the Rhine known as the Waal about 50 miles and you come to an area of forests, wetlands and small villages just east of Rotterdam called the Biesbosch. 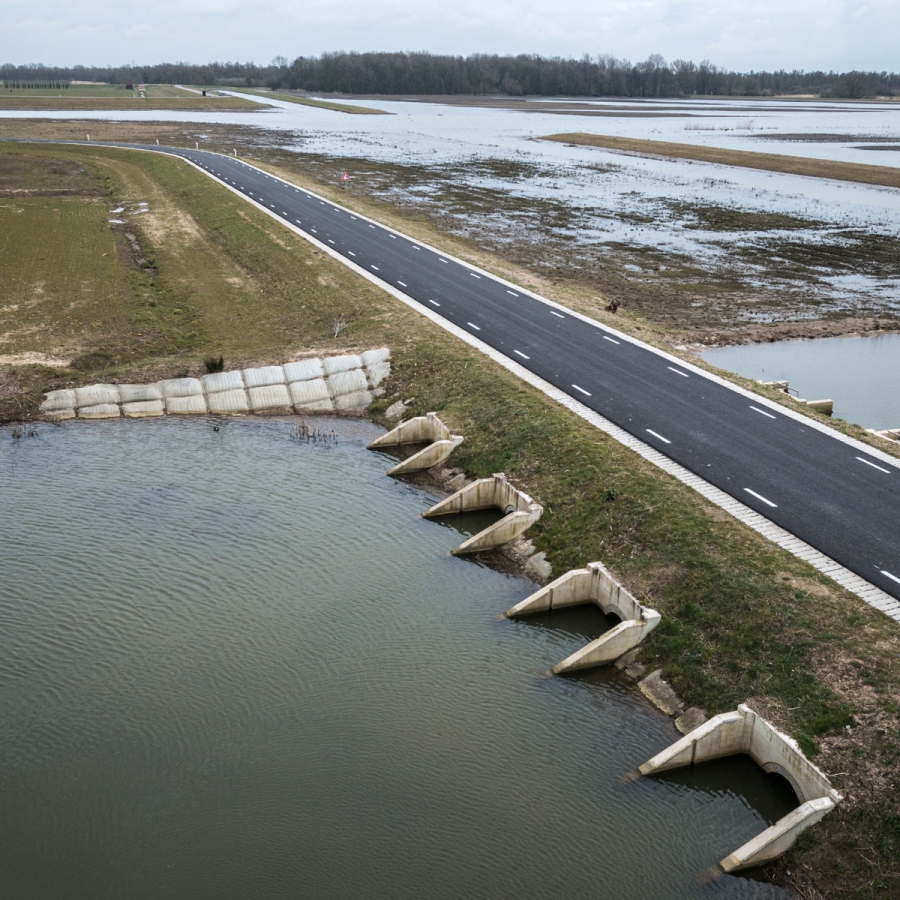 A new dike reopens some of the historic floodplain of the Rhine River (R) near Nijmegen, the Netherlands, from still-protected land (L).

“The Biesbosch is a big nature area,” says Robbert de Koning, “but people live here, too.” de Koning is,another landscape architect who worked on what’s known as the “Noorwaard depoldering.” A “polder” is what the Dutch call the low-lying area behind a dike. And Noordwaard is a big one.

It’s an area where two big rivers, the Waal and the Meuse, come together. Like in Nijmegen, the Dutch government decided to essentially abandon the flood protections at Noordwaard. The new plan was to let the water spread out here, to prevent catastrophic floods in more populated places elsewhere.

There’s an added benefit, too. The project restored 25 miles of creeks, creating a wetland that’s already popular with birders and bikers from all over the country.

But before it was a flood control project, the Noordwaard was a village. And people still live there. People like Anneke van Lelieveld. 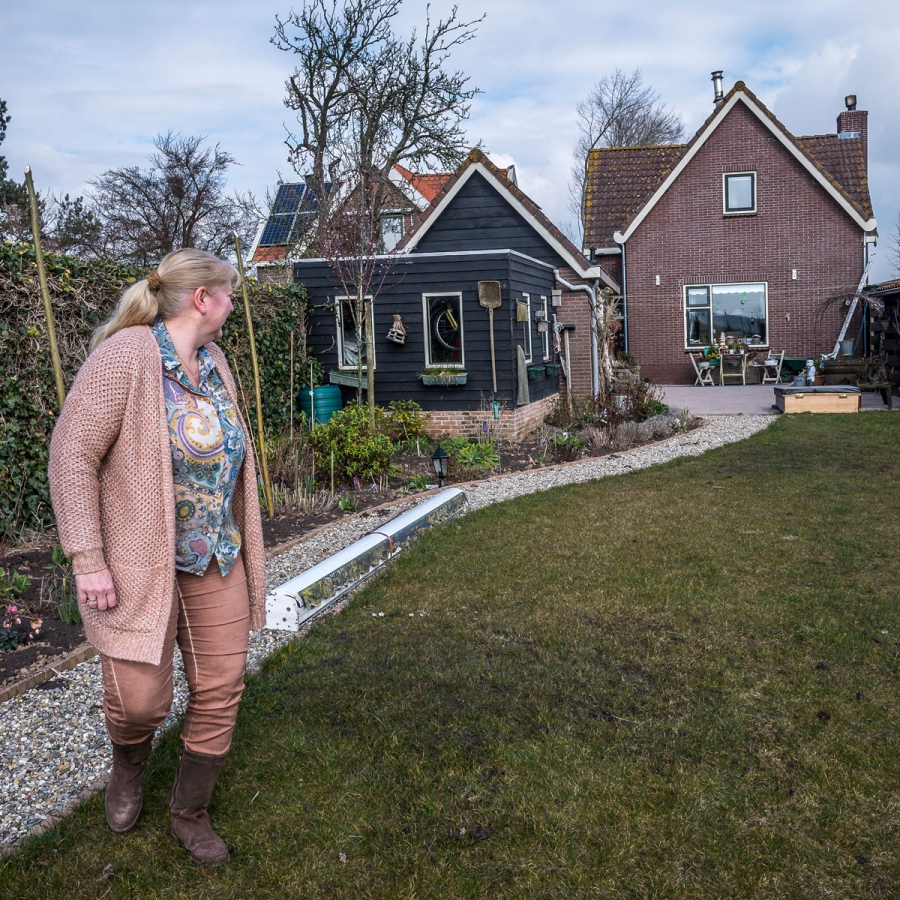 Anneke van Lelieveld's house sits atop a dike near a "room for the river" project in Noordwaard, the Netherlands. She understands the need for a new approach to managing water in this new era of climate change, but misses the neighbors that the project displaced.

Her family has lived in the area for generations. So 20 years ago, when the government first started talking about “depoldering” the Noordwaard, van Lelieveld got involved.

“It was a long time, it was a hard time,” she says over tea and stroopwafels at her house in the Noordwaard. “It was a learning process for everyone. For us, but also for the government.”

Ultimately, the government gave people a choice: If your house was at least a meter above the new high-water level, you could stay. If not, they’d buy it, raise the land on your property, and then let you rebuild.

Van Lelieveld’s house is on a levee, already high up, so she didn’t have to move. But her garden became a construction zone. And a lot of her neighbors are gone.

“Everything was out. Every tree, every building, every plant. Everything. And they said to us it was going to be for six months,” van Lelieveld says. “But it was four years.”

She’s happy to have her garden back, and some small compensation from the government. The new wetlands are also nice, she says. Van Lelieveld has a boat that she uses to explore the new creeks created by the depoldering project. She spends the night on her boat sometimes, and occasionally glimpses sea eagles — a once-rare bird of prey that has returned to the region.

She loves the return of nature to her home. But she’s also ambivalent.

“Sometimes it’s hard for me,” she says. “When I go with my boat, one moment it’s amazing, but sometimes I have also some tears. Because I miss my neighbors. It’s a mixed-up emotion.”

It’s complicated for people like van Lelieveld. She’s sad about what’s being lost, but she’s proud that people are visiting from all over the world to see what the Dutch are doing to prepare for a new future.

“Because the Dutch people have always been building dikes, dikes, dikes,” she says. “And now they’re crazy — they’re giving land back to the river! But there’s something changing. The climate is changing. There are troubles. And well, there must something happen.”

What’s happening here is painful. But the Dutch believe the alternative is far worse.

And that may make the Netherlands an example for other low-lying regions facing the same tradeoff: sacrifice today, or risk even more tomorrow.

This story is part of our collaborative series on living with sea-level rise with The GroundTruth Project. Also check out Rising Tide: Boston Underwater, from GroundTruth and WGBH.