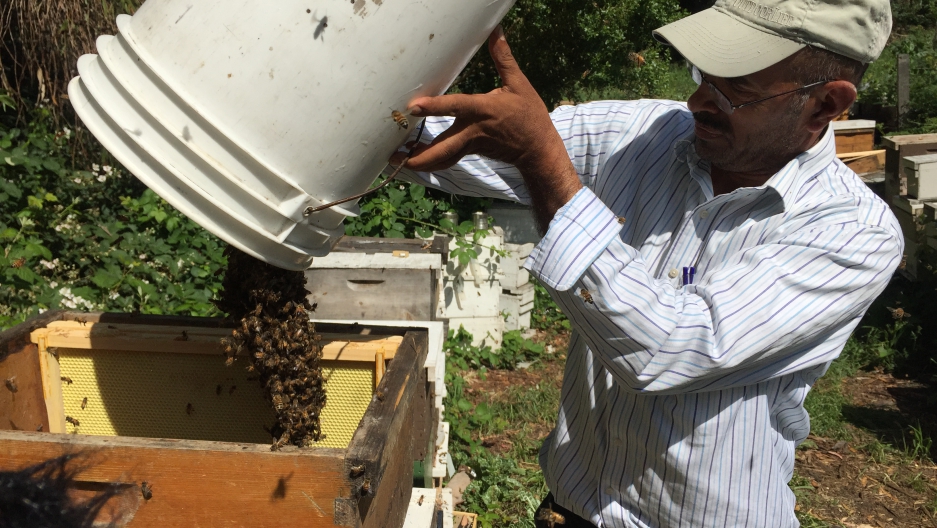 Khaled Almaghafi at his apiary in Richmond, California, just north of Oakland.

Inside a small bedroom of a palatial home in Oakland, California, Khaled Almaghafi climbs a ladder and draws a rectangle on the ceiling where it meets the wall. His assistant takes a saw to a chunk of plaster, a flap of ceiling drops and thousands of honeybees escape — flying through the room, clinging to the curtains in clumps.

Almaghafi, who calls himself the "bee rescuer," remains calm, admiring the perfectly engineered wax comb now hanging from the rafter. He hoists a vacuum nozzle directly into the hive and softly suctions the bees into a plastic bucket.

Live bee removals is Almaghafi's work, at least during swarm season in the spring and early summer. And judging by the number of phone calls he gets, he’s in demand.

But he doesn’t look like your typical beekeeper. No mask, big white suit, or gloves. This 52-year-old father of four looks like he's heading to an office job, wearing pleated pants and a button-down shirt. "If they attack me badly in the face, I will wear a suit. I don’t mind getting stung once or twice, it gives me the energy!" he says.

That’s one way of looking at it. But also consider that Almaghafi has worked with bees since he was a kid, growing up in Sana'a, the capital of Yemen. "Most of my childhood was with my dad, watching him raising the bees," he says.

In Yemen, beekeeping is respected and often family-run work. Almaghafi’s relatives raised bees the traditional way, in hollow trees and with hives made from bamboo. "But my dad, he was the first one to bring the modern style hive from Egypt to Yemen with the tin frame box. The American style hive," he says.

But as a young man, he wanted to travel and learn more about his trade.

Khaled Almaghafi, left, with this father in Sanaa, Yemen, in 1967.

"I heard a lot about the agriculture in California, beekeeping, farming and all that stuff," he says. So, in 1986, at age 22, Almaghafi flew to San Francisco. He wanted to study bees at the University of California, Davis, but he didn’t have the money or legal documents needed to enroll. He took a job at a gas station instead, looked up beekeeping in the phone book and found an elderly man doing live bee removals. The man became his friend and mentor and, before he passed away, "he give me his extractor, his vacuum, for free," Almaghafi says.

With the bees Almaghafi gathered from roofs, ceilings and backyards around the Bay Area, he was able to rent out his hives to big farms in California's Central Valley to pollinate nut trees and row crops. But in the late 2000s, a sudden die-off decimated his hives. As he slowly recovered his business, his father in Yemen offered some advice.

"My dad kept telling me, 'You know, you can open a store there. People respect bees and honey,'" Almaghafi remembers.

And so he did, opening the popular Bee Healthy Honey Shop in Oakland, where Almaghafi sells products like wax candles and honey — all displayed on hexagonal shelves, like a giant honeycomb. He got the idea from back home.

"If you go to the honey shop in Yemen, it's just like you're going to the museum," he says. "The floor, the walls, everything, like you are inside a beehive. Imagine you go there and you smell the honey from all over the country."

But there’s one special Yemeni honey that’s coveted worldwide. It comes from Yemen's Do'an Valley, in the country's south, where the beekeeping tradition dates back thousands of years. There, the jujube or sidr tree flowers once a year. When it does, beekeepers from all over Yemen move their bees to that region.

"You can smell the honey from a distance," Almaghafi says. "It tastes different, smells different." Like perfume, he explains. People add herbs to it and use it as an aphrodisiac and a cure for various illnesses.

But now these businesses are struggling. Yemen’s civil war is tearing the country apart, with thousands killed, and millions displaced. "People are struggling, trying to make it. God with them, you know?" he says.

Yemen’s honey industry has also tanked. Almaghafi’s brother has scaled his bee business way back. But it’s what happened to his father a decade ago that hurts Almaghafi most. His dad had left the military because of the corruption he saw and raised bees instead. But then a tribal leader wanted his land and, Almagahfi says, killed his father to get it.

"He lived a simple life, bees and trees, until they shot him ... over his small garden, believe it or not. That's what hurts a lot," says Almaghafi.

He thinks about this in California, as he puts buzzing bees into a bucket, like coaxing a genie back into the bottle.

He also thinks about faith.

Almaghafi’s work is spiritual. He’s Muslim and the Quran says God told bees how to make honey. For Almaghafi, they’re proof of a higher being. "You see how they dance, how they collect the honey, how they work," says Almaghafi. "You feel deep inside there is a creator, created all those things and created us and the whole globe."

It troubles him that some can see bees, like Islam, as dangerous. "They benefit us for pollination, for medicine, for the environment. If it wasn’t for them, we’d be stuck," he says. "They do all this for nothing!"

And when he thinks about the war in Yemen, he remembers his father and how he took an old box from his military days, once filled with bullets, and converted it into a beehive. Almaghafi hopes that, soon, more people in Yemen will do that too.

A bee hive nested in the ceiling of a home in Orinda, in the San Francisco Bay Area.