Springdale High School’s Class of 2016 on graduation day at the Bud Walton Arena, University of Arkansas. A large population of students in Northwest Arkansas traces its heritage to the Marshall Islands.

"If there wasn’t nuclear testing, would we need green cards to come here, too?" asks 18-year-old Allen Hax.

Just days before graduating from high school, Hax is sitting at a table with his classmates, their teacher, school administrators and leaders of the Marshallese community in Springdale, Arkansas. The group is gathered at Archer Learning Center, one of three public high schools in the district.

Alfred Capelle, a Marshallese linguist and co-author of the only existing Marshallese-English dictionary, is also there. He flew in from Majuro, the capital of the Marshall Islands, to be a guest of honor at Springdale’s celebration of the 37th anniversary of the islands’ independence. With his colleague, David Hough of the College of the Marshall Islands, Capelle is encouraging students to become stewards of their heritage. For the students, this creates a golden opportunity to ask questions about who they are and how they got here.

Though they might not all know it, Hax and his friends are a part of the largest Marshallese community in the mainland US. According to the 2010 US Census, 12,000 people in Springdale trace their heritage to the Marshall Islands. Administrators count about 2,000 students of Marshallese descent in Springdale’s public schools, half of whom were born in the US.

To put these numbers in context, there are about 70,000 people total who currently reside in the 29 atolls of the Marshall Islands. Most recently, the islands have been best known in the US for showing the effects of climate change. The New York Times reported last year that the Republic of the Marshall Islands is seriously endangered by rising sea levels. Given that they hail from such a watery place, Marshallese students are often curious to know how so many of them ended up in landlocked Arkansas. The short answer is colonialism.

The islands were occupied by the Spanish in 1528, the Germans in 1884 and then the Japanese at the start of World War I. During World War II, the US occupied the Marshall Islands and afterward used them to test 67 nuclear weapons from 1946 to 1958. (Detonations at the Bikini Atoll later gave rise to our name for two-piece swimwear, which was likened to an atomic explosion when it first hit the fashion scene.)

Radioactive fallout from the tests caused both short and long term damage to the Marshallese people’s health, followed by continued claims and negotiations for reparations. Thirty years ago, the US signed the Compact of Free Association with the Marshall Islands, granting autonomy to the Micronesian nation while allowing its citizens into the US without visas for indeterminate stays.

The first wave of immigrants settled in the unlikely locale of northwest Arkansas when Tyson Foods, the chicken processing conglomerate with headquarters in Springdale, actively recruited cheap Marshallese labor, knowing that the workers would not fall under the scrutiny of immigration officials. 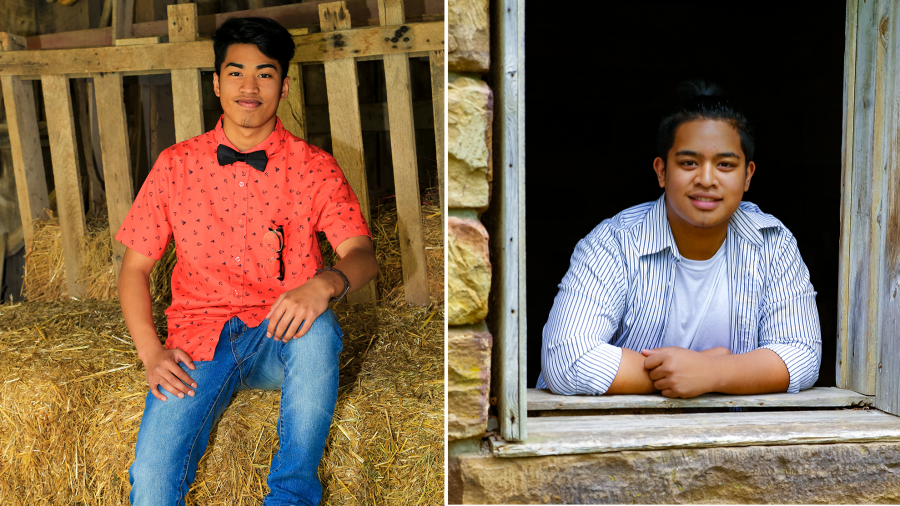 Allen Hax, on the left, is graduating high school from Archer Learning Center in Arkansas this year. Robert Nakasone, on the right, is graduating from Springdale High School. They and their classmates agree that all they have to hold on to from the islands is culture. At the same time, placing their identities somewhere between the Marshall Islands and the US can be challenging.

Credit: Courtesy of the Photographic Society of Northwest Arkansas
Robert Nakasone, a graduating senior at Springdale High School and first ever Marshallese state officer for SkillsUSA, describes how all this history factors in for him and his classmates: “The brutal truth is, when we come here, the only thing we take is our Manit. That is our culture and way of life,” he says. “Our attention has always been focused on events that happen here in the US because this is where we live.”

Manit is a concept that Marshallese students of all ages and stripes understand and respect. Fifth-graders in the lunch room of Parson Hills Elementary, for example, are quick to share what elements of Marshallese manner and culture are non-negotiable with their parents and elders. They remove their shoes in the house, dress modestly and help their families out at home before they go out to play. Observing Manit while trying to be regular Americans is not easy for the students, but they are distinctly proud of their heritage.

Emmie Anthony, who was born in Springdale Arkansas, and her classmates Raygon Jacklick and Franjesca Maddison, who came to the US just a few years ago, sing in the halls of Lakeside Junior High. They perform “Hallelujah” in English and a folk song, “Jalitok,” in Marshallese. Singing is just one way that the students enjoy both their Marshallese heritage and American upbringing.

Back at the round table discussion at Archer, Mariah Josephson, 18, another graduating Archer senior, declares: “I’m angry.”

She feels that a lot of people have opinions about how teens should carry on Marshallese culture, but don’t necessarily give guidance about how to do it.

Josephson’s father was an American defense contractor on the military atoll of Kwajalein when he met her Marshallese mother. The couple split after arriving in the US. After living solely with her father, Josephson decided two years ago to move into her mother’s household, complete with an extended Marshallese family and new rules. She is still re-learning the other half of who she is, and grappling with what to take from what seem like dueling existences. Meanwhile, people continue assuming that she is Mexican or half African American because of her biracial ethnicity.

At the round table gathering, Josephson and her friends continue to pepper the experts with poignantly basic questions about who they are. They ask where the Marshallese people originated, so Hough pulls out a map to trace their anthropological beginnings.

The school district has made efforts to include Marshallese culture and history in its curricula, but this is stuff the students have never learned in class. They are transfixed. One student says, “This is blowing my mind right now.”

Inspired, Melines Morris, 18, asks if she can shadow Capelle in his efforts to preserve Marshallese language and culture. He responds, “Sure, yes!”

“Where’s your office at?” she asks.

She hollers, “Damn, I’m gonna have to save up!” Everyone laughs.

Majuro might be out of the question for now, but if the students connect the dots, they will find a growing tribe of young adults who have been down the same road of figuring out what it is to be Marshallese in the US.

Benetick Maddison, 21, a rising junior studying political science at Northwest Arkansas Community College, arrived in Springdale at age 6. It was March and he had never seen snow before, nor had he ever seen anyone who is white. He remembers his first day of school: “Oh my gosh. I cried and cried.”

Maddison now runs the Manit Club of Marshallese American students on campus, which is piloting a mentorship program for middle school students this fall. He also works with the Marshallese Education Initiative, which led the Nuclear Legacy Summit in Salem, Oregon, last month and strives to amplify Marshallese American cultural history nationwide.

Chris Balos, 27, teaches literacy classes for Marshallese and Hispanic workers at Tyson. Last year, he organized local “1.5 to Stay Alive” protests via his cultural group Lamoran (Marshallese for homeland) to curb global warming. Though he has not been back to the Marshall Islands in years, he says that his family members have noticed the rise in sea level over the years.

The students at the Archer round table discussion are also attuned to the buzz over climate change. Josephson asks what would really happen to the islanders if the islands sank. Capelle has a blunt answer.

“Well, they will die on their land. The cowards will come over here, but those that love their land will die there,” he says.

Silence floods the room again. The fact is that the students’ lives are here and they wouldn’t drown for anything. Some of them have never set foot in the Marshall Islands. David Rieza, 17, who also sits at the round table, is proud of who he is, but was born in Guam and raised in the US, and has no particular desire to go to the Marshall Islands.

It’s not that life in Arkansas has been easy for Rieza. Before finding his way to Archer, he was expelled from high school and even spent a night in jail after running from cops who were trying to detain him for loitering. He credits a teacher and his Marshallese American friends with giving him direction when he was “lost.” Now, he is receiving his diploma, setting his sights on higher education and a career as a mechanical engineer.

Elders, teachers and community leaders are looking to these students, not only to embody the American dream, but also to become reservoirs of Marshallese culture on the mainland as rising tides overwhelm the islands. Yet, no one at the Archer round table can tell the students how to build this fortress — nor has anyone asked if they even want this responsibility.

After more than three hours of discussion, Hax’s original question remains unanswered. It is impossible to say what might have been had the US not occupied the Marshall Islands; not used it as a major nuclear testing area. The students leave the building as the sun sets and rain begins to fall. They know they will have to answer the tough questions for themselves if they are to keep their culture alive.

A young girl watches the Springdale High School graduation ceremony on May 21st, 2016. On the back of her T-shirt is the flag of the Republic of the Marshall Islands. For Marshallese students in Arkansas, preserving culture for future generations is paramount, since the place they come from is at real risk of disappearing from the effects of global warming.