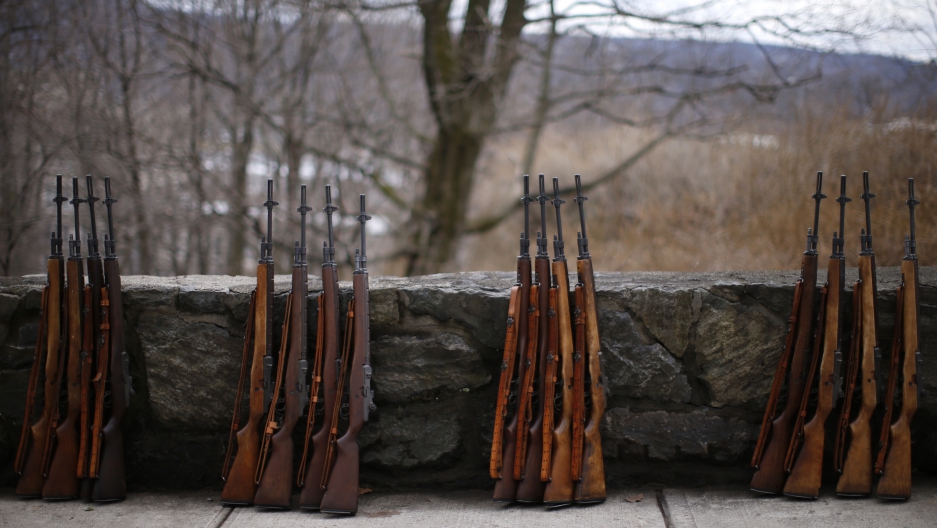 Have you ever found yourself "sweating bullets" because you were "under the gun" at work? Ever hatched a "bulletproof" plan? Or taken a "shot in the dark?" Told a joke that totally "misfired?" Ever had an idea that was "shot down" right on the spot? If you have, did you "stick to your guns?"

By almost any measure, guns are prevalent in America. There are an estimated 270 million of them in Americans' hands. Tens of thousands are manufactured here every year, and thousands more are on display everywhere from the NRA’s National Firearms Museum in Virginia to the Metropolitan Museum of Art in New York City. They are also a mainstay in our everyday conversations, whether we realize it.

Yes, here in America, we seek "silver bullets" for complicated problems, and "smoking guns" to prove guilt in the court of law — and of public opinion. We’re practically awash in "gun speak."

"It’s just part of our way of talking," Myers said. "It’s so common. It reflects this longstanding obsession that we have with guns."

Myers says "gun speak" has permeated American culture so deeply that it’s used by everybody — men and women, Republicans and Democrats, gun owners and people who have never even seen a real gun — often without thinking.

"I’ve tried to pay attention to whether this is a more- or less-educated style of speech, and I don’t think it breaks down by education or social class," he said. "I think it’s just throughout the culture."

Indeed, an urban-dwelling business executive is just as likely to "pull the trigger" on a deal as a deer hunter is to pull the actual trigger on his rifle in the wilds of New Hampshire.

So is this a uniquely American thing?

No other modern, wealthy country is as obsessed with guns as American are, Myers said.

"Does that mean nobody speaks about guns using these expressions and idioms? I’d put my money on ‘Nobody does,’ but I can’t be sure," he said.

To be sure, many of of these expressions are just that — expressions — long stripped of any truly violent intent. So the million-dollar question is, does it really matter that we use them so freely in casual conversation?

"We are far and away the most violent wealthy society, and we are the most prone to use guns to kill somebody," Myers said. "I have a hard time saying that the way we speak is causative there. I think it’s clearly a deeper comfort level that we have with guns."

And that comfort level, that ease with which we use these loaded words and phrases, in Myers' estimation, does matter.

"I can’t say that we use this violent language and imagery and that makes us more violent," he said. "But I can ask the question, 'Well, if we spoke with all kinds of racist words were we more likely to be more racist or more comfortable being racist?'"

In the end, Myers says simply changing the way we speak won’t alone change the way we behave, but that doesn’t mean it’s not worth thinking about the words we use.

"How we talk matters," he said. "If we’re uncomfortable with the fact that so many people get killed by guns in our culture, it would be a good thing for us to slow down and listen to how many different expressions that we use that have to do with firearms, and shooting, and guns. Awareness of how we speak is always a good idea."

And if you do decide to take a shot, and target the expressions that you use for more careful scrutiny — even just for a day — be prepared. You might be blown away but what you find.

If something's caught your eye that you are curious to know more about, email Edgar at curiositydesk@wgbh.org. This story was cross-posted with our partners at WGBH News.