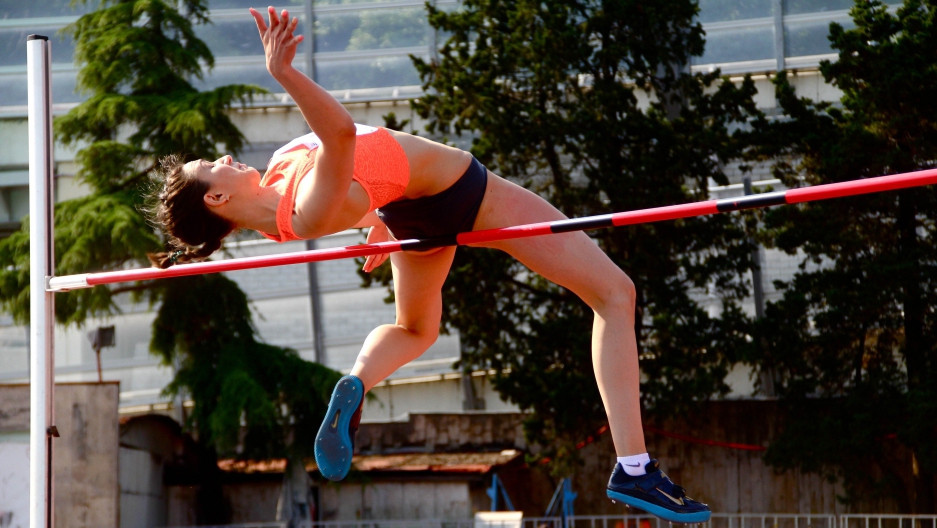 At the all-Russian Track and Field championships in Sochi, it's a little lonely: just the athletes, coaches, and a smattering of fans. The competitors are waiting to find out if they'll be allowed to compete in Rio.

At the all-Russian Track and Field team championships in Sochi, high jumper Alexei Dmitriev looks out at the stands and admits the scene unfolding is “a little sad.”

The Sochi weather? Great. The stadium grounds? Groomed and ready for competition. But the near empty bleachers? Disheartening.

“It’s just the athletes and their coaches cheering us on,” Dmitriev says.

At 32, Dmitriev is making what may be his last bid for a chance at joining the Russian Olympic squad. He says he misses the drive and adrenaline that comes with competing in front of crowds and measuring himself against the world’s best.

Ever since a ban went into effect last November over allegations of widespread Russian doping, Dmitriev and the rest of Russian track and field have been forced to sit out international competitions because of what he calls “the scandals.”

“You don’t know what you’re training for,” Dmitriev says, “or why you’re even competing.”

Make no mistake: the past few months have been nothing short of a disaster for Russian sport.

Next there was meldonium — an over-the-counter heart medication widely used by Russians as a non-prescription prophylactic. Meldonium was added to the world sport banned substances list in January 2016.  Positive tests for the drug have since snared dozens of Russian athletes, including the world's former No. 1 women's tennis player, Maria Sharapova, who received a two-year suspension earlier this month.

Most recently, Russian whistleblowers have come forward — including the former head of Russia’s anti-doping program, Grigory Rodchenko. Singled out for doping infractions in the anti-doping agency's November report, Rodchenko now says he worked on the Kremlin’s behalf to help Russian athletes dope their way to medals in the last three Olympics, including Russia’s triumphant showing at the 2014 Sochi Winter Games.

Russia took first in the medal count when it hosted the Games — a crowning achievement to Russian President Vladimir Putin’s efforts to return Russian sport to its former Soviet glory.

“Why is it only Russia that’s being punished when other countries also have doping problems?” asks Russian long jumper, Ekaterina Kaneva.

The steady drip of doping scandals now risks undermining those achievements, with a growing international chorus calling for an outright ban on Russia’s participation in the Rio Games.

“It’s unjust,” says Ekaterina Kaneva, a long jumper who was among several Russian athletes who voiced suspicion that politics, rather than sport, was behind the attention given to Russia’s doping woes. Kaneva herself served a two-year ban for use of illegal steroids back in 2007 but is now hoping to make Russia’s Rio squad.

“Why is it only Russia that’s being punished when other countries also have doping problems?” she asks. “Their athletes were banned and can compete again. Why are we the only ones suffering?”

The official Russian response to the doping charges has swerved between displays of defiance and contrition. As charges of misconduct have grown, Kremlin officials have dismissed the allegations as an “information attack” aimed at scapegoating Russia for problems facing international sport.

But Russian sporting officials have also implemented reforms — handing over control of their anti-doping operations to outside observers and suspending dozens of athletes for substance violations. These moves, Kremlin officials say, ensure only clean athletes could compete in Rio.

Sergey Shubenkov is the 2015 world champion in hurdles and one of Russia’s brightest medal hopes for the 2016 Summer Games. But he worries he may have to sit out Rio, like his mother had to miss the 1984 Los Angeles games.

“I’ve never been tested this frequently,” says Sergey Shubenkov, the 2015 world champion in hurdles and one of Russia’s brightest medal hopes for the 2016 Summer Games. Under the new anti-doping regulations, Shubenkov says he’s tested every month and must inform officials of his whereabouts. The moves, he argues, are well worth the trouble if they convince the doubters.

“The decision to my mind is really obvious — just go and punish the ones affected with any ... I know this [English] word, ‘complicity,’ ” he says. “Let them be punished if they’ve violated the rules. But what am I punished for?”

For Shubenkov, a ban on competing would be a bitter, and familiar, pill.

His mother, Natalya Shubenkova, a top Soviet athlete in the heptathlon, was forced to skip the 1984 Los Angles Olympics when the USSR boycotted the US-hosted Games.

“She was at her career peak at that moment; she was unreachable,” says Shubenkov of his mother’s chances for medaling in LA. “But she was fourth in the next Olympics in Seoul in 1988.”

Russia took first in the medal count when it hosted the Olympics in Sochi in 2014, but now Russian athletes are wondering whether they'll even get to compete in Rio.

Like other athletes here, Shubenkov knows his Olympic dreams hang on Friday, when track and field’s world-governing body gathers in Vienna to give its final verdict on Russia’s anti-doping progress.

What the sporting body decides will determine whether Russian athletes get a fresh start in Rio — or watch their Olympic dreams pass them by.