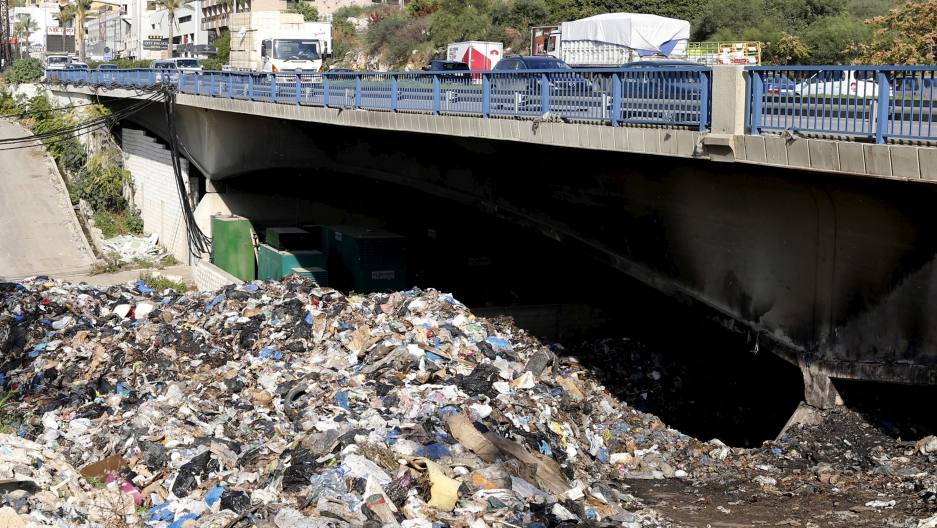 Garbage piles up in a riverbed near Beirut in late 2015. The region's almost year-long trash crisis prompted a political crisis, but also the emergence of nascent recycling programs.

Lebanon isn’t without its share of problems. No elected government. Over a million Syrian refugees. ISIS tickling the border. And a massive trash crisis.

Shadia Khater may not be able to do much about the first three of these, but she’s doing her best to help solve the fourth, and change the way people in Lebanon think of their trash.

I met her inside what used to be an indoor basketball court, stacked now with 10-foot-high mounds of trash — metal, glass, paper and various types of plastic — surrounded by trucks dumping, workers sorting, compacters compacting.

And for Khater, it’s almost heaven.

“It” is the new recycling facility for the Beirut suburb of Beit el Shaar, and Khater, who runs a plumbing and HVAC contracting company, is its founder. 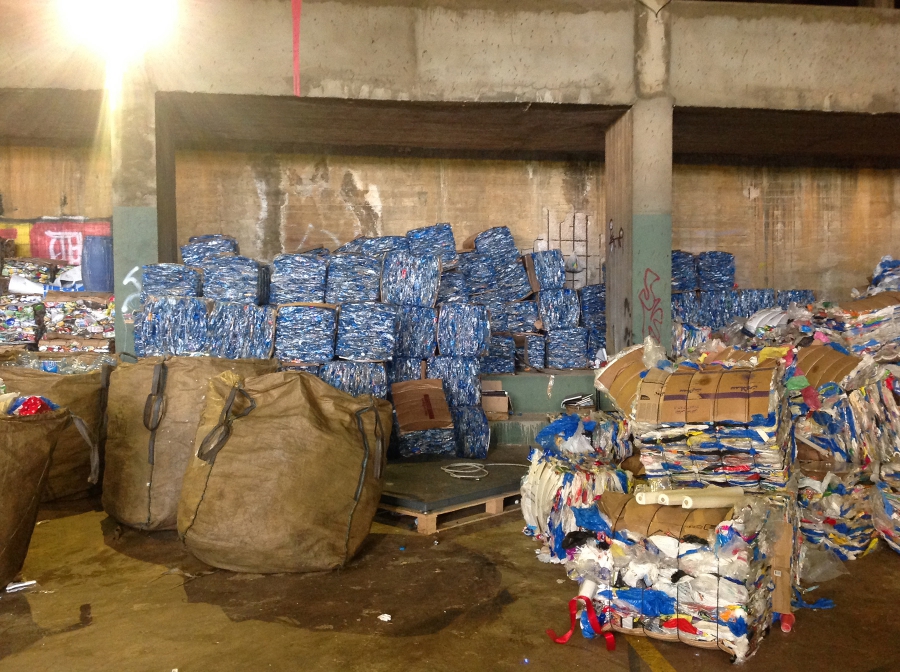 Mixed household recyclables are sorted, compacted and packed up for sale to commercial recyclers in a former gym in the Beirut suburb of Beit el Shaar. The facility is one of the first in Lebanon for household waste.

Household recycling had been almost unheard of in Lebanon until the past year. Khater is a zealous advocate of the practice, but it’s only really begun to take hold here due to a situation that has spun out of control.

Almost a year ago, the dump for about 3 million people in and around Beirut closed its gates.

“The way they were dumping the waste there was not according to good practices,” says Ziad Abichaker, head of a Lebanese NGO called Cedar Environmental. “There was lots of odors emanating, a lot of complaint from local residents. Methane gas generation was not being managed well. So people were really getting sick from these toxic gases.”

Read more: Lebanon's got 99 problems and trash is just one

Abichaker says the whole situation also stank of corruption, with politicians giving one company a monopoly on trash collection and getting kickbacks.

Once the dump closed, though, there was nowhere to put the garbage. Collection stopped, and people started chucking their trash wherever they could, including along the banks of the Beirut River and other local waterways.

It was filthy and dangerous, and all of a sudden something most Lebanese had never been concerned with became a problem.

“Now, your options are very limited,” Abichaker says. “Either [you’re] gonna bathe in your own garbage or you’re gonna start looking at it differently. The best way to adapt is when you’re in a crisis.”

One obvious solution might be for people to just produce less trash. But Abichaker says that’s a very hard change to make. He says most of the trash people are producing, though, can be recycled.

Which is where Shadia Khater comes in. 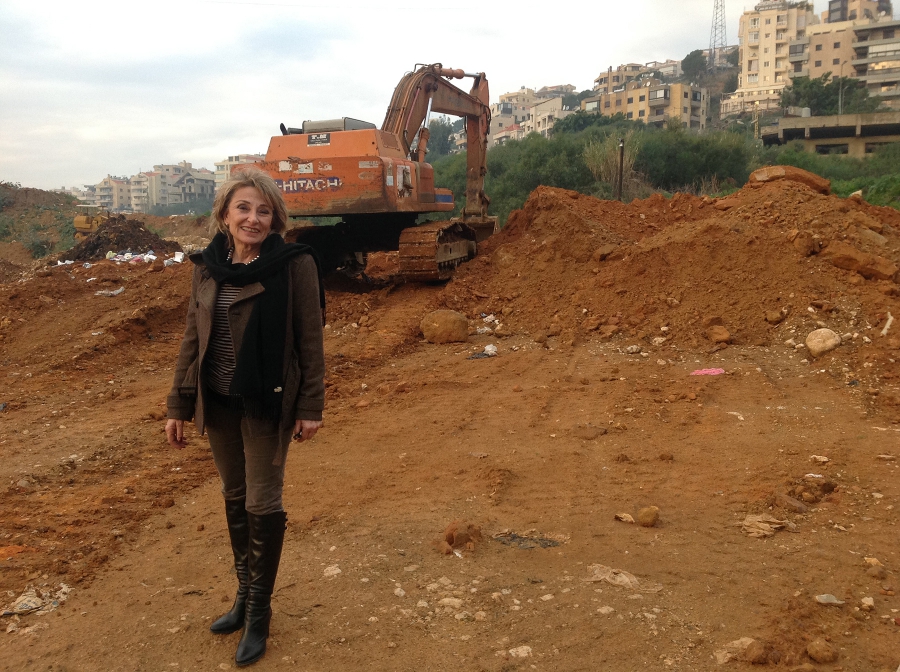 Shadia Khater, who took the lead on developing her community's recycling center, stands on a site that she hopes will become a compost facility for household foodwaste and other organic trash.

Her facility sorts and ships household recyclables. Khater says getting the operation up and running was the easy part compared to the challenge of getting her neighbors to even think about sorting their trash for recycling.

“The most difficult part of all the story,” she says, “[is] to change the mind of the people. First to sort, then to sort well, then to continue to sort.”

Khater’s approach has been nothing short of a blitzkrieg.

She keeps a notebook listing every house and apartment in Beit el Shaar, and she and her team went door to door to each one to explain the importance of sorting and recycling.

Not surprisingly, they met resistance from folks who just didn’t want to bother. So with one community, she got provocative.

“I had the idea to put my car and to block the road,” she says. “It was in the early morning, and they couldn’t go out anymore to go to school, to work.”

Khater only moved her car when people started sorting their trash on the spot.

Another time she asked a priest to discuss recycling in his homily, and then sat in the front row of the church to make sure he followed through on his promise. He did.

Khater says the result of her efforts and others like it has been a slow turn toward recycling in this suburb and elsewhere in Lebanon.

Of course only time will tell if the trend will continue. Her new business isn’t making money yet. 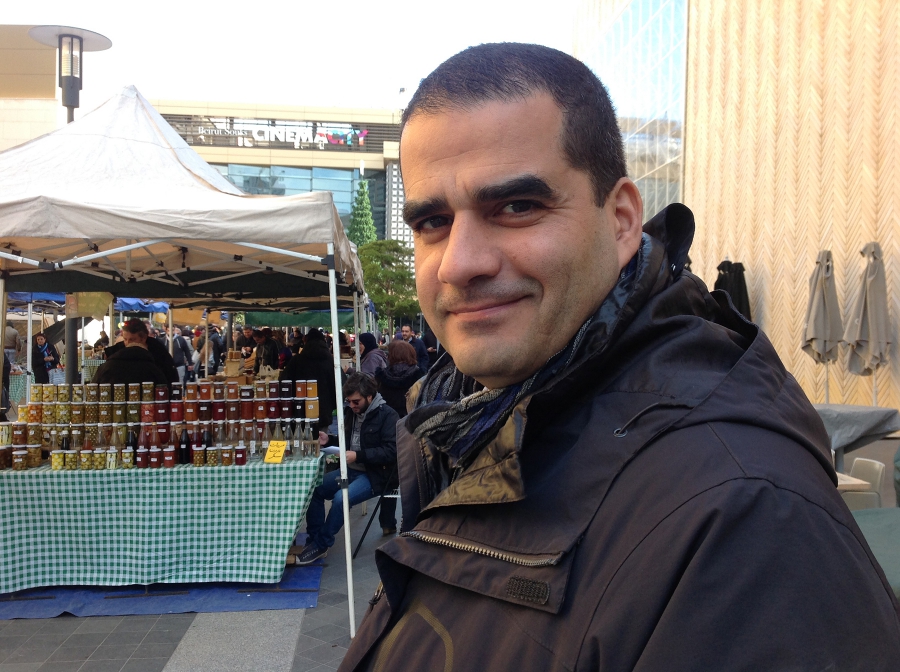 And in some communities in the Beirut area, regular trash pickup has started again, with the waste headed for both old and new landfills. That’s good for the dumping crisis, but maybe not so good for recycling. Like Khater said, it’s tough to get people to continue to sort when there’s an easier option.

But she believes that the sheer volume of trash here remains a real problem — one that may eventually allow recycling to really take root in Lebanon.

“I hope it will be a turning point,” Khater says. “I hope from the bottom of my heart that we can do it this way, because it’s the correct way to do.”