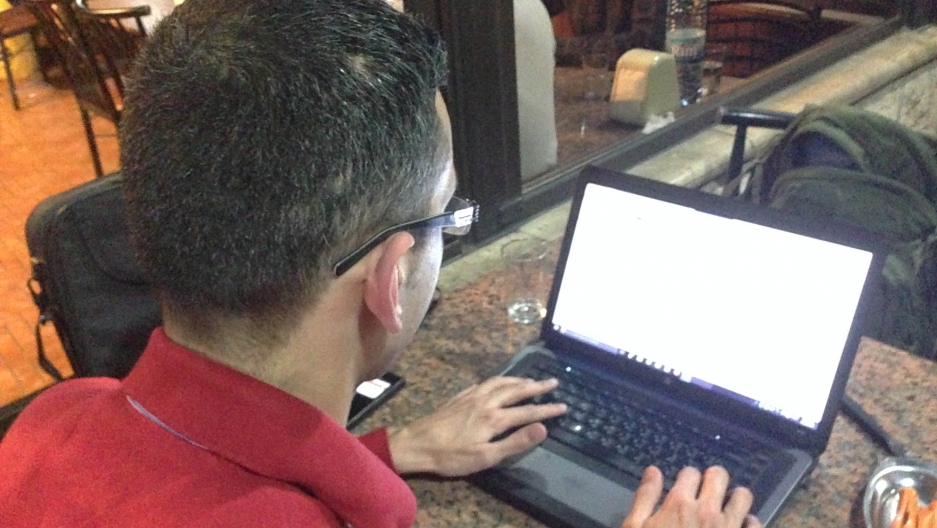 Ghaith is a Syrian refugee living in Beirut. He can't work there but now he can earn a living as an online Arabic teacher.

I’ve come to a cafe in Beirut to meet a young Syrian refugee named Ghaith. His name is easier to write than to say. In Arabic, “gh” makes something like an “r” sound, but from the depths of your throat.

“I know there is no way to say it in English,” Ghaith says to comfort me in my distress. We try it together several times before I finally get it.

Ghaith, who asked not to use his last name, is an Arabic teacher. But until a few months ago he was struggling merely to survive in Lebanon. There are more than 1 million Syrian refugees like him in this country of roughly 4 million people — more refugees per capita than any other country in the world. And, officially, they’re not allowed to work.

Suddenly, Ghaith gets a call on Skype.

“This is my student,” he says, and our table transforms into an Arabic classroom.

Ghaith is part of a startup called NaTakallam, which in Arabic means “we are speaking.” The service connects Syrian refugees like him with Arabic language students around the world.

Today’s student is Holly, who’s Skyping from New Mexico. She's struggling with the lyrics of a Syrian pop song. Ghaith guides her through the melody.

“Listen to the sentence and tell us what that means,” Ghaith says.

NaTakallam was co-founded by a young Lebanese-American named Aline Sara. A year and a half ago, she was looking to improve her own Arabic just as the refugee crisis was mounting in Lebanon. It dawned on her: A lot of these Syrians are highly trained and motivated — and they’re just sitting around.

“I was thinking that while they're in this limbo, they can become conversation partners,” Sara says. “So why not meet up with them and I would compensate them?”

She saw a business opportunity in the US, and decided to shop the idea around. She put a website together, and when it was still in the trial phase, “the platform went viral without us being ready,” she says. “This was right around August, and the website ended up being shared around 5,000 times in a week.”

NaTakallam is a for-profit business, but the aim is to tackle social problems usually left to nonprofits.

“It’s one thing to give to an aid organization — to give food, to give money to the community,” she says. “But you’re a passive recipient to aid. What NaTakallam does is we’re giving them jobs. [The refugees are] the ones who are helping the students. It’s flipped in that sense.”

For students like Holly, NaTakallam’s appeal is twofold. First, private virtual lessons are just $15 an hour — a bargain compared to traditional in-person tutoring, which can run $50 and up.

Second, Holly knows she’s not only helping herself, “but also the teacher because the war in Syria has destroyed most of their lives.” She adds: “It was nice to know I was doing something to help them in some small way.”

Ghaith can use the help. Three years ago when he escaped Syria, he entered Lebanon illegally. While he’s living in hiding, NaTakallam allows him to earn $500 in a good month. On a social level, he calls it his “window to the world.”

“I have around 30 students today from the US, from England, from Germany, Pakistan,” he says. “Most of them became my friends.”

That gets to the inherent scalability of this idea: It's not just Beirut. Ghaith and his teaching colleagues can operate from anywhere.

All they need is a laptop, a Skype connection — and someone like Holly on the other end.