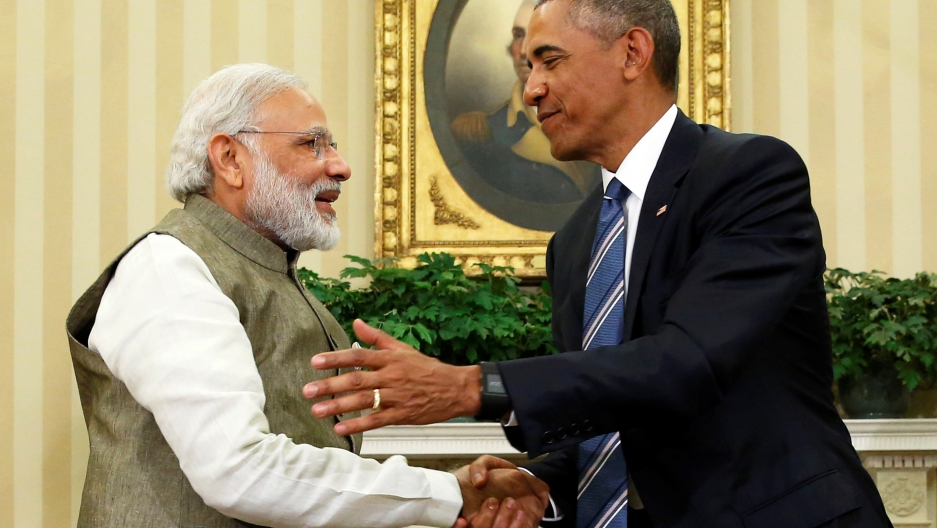 Obama shakes hands with Indian Prime Minister Narendra Modi on June 7, 2016 after their meeting in the Oval office.

President Barack Obama welcomed India's Prime Minister Narendra Modi to the White House on Tuesday in a low-key nod to the improved ties between the world's biggest democracies.

That the pair would get along was not a given: When Obama came to office in 2009, the Hindu nationalist was banned from entering the United States over his role in the 2002 Gujrati anti-Muslim riots.

But the ban was lifted after Modi was sworn into office in May 2014 and he has since made four US visits — two to Washington — while Obama has twice traveled to India.

Relations between the countries are not always easy — India insists on staying out of formal alliances and forging its own course — but both leaders can boast that ties have improved.

For Obama, who will step down from office in January, this is now a matter of his legacy: Friendship with India and inroads into its huge market are a victory for his so-called "pivot to Asia."

For Modi, Tuesday's visit was an opportunity to set the stage for what he hopes will be a mushrooming in US-India trade from $120 billion to $500 billion.

Aside from the bear hugs and tea sessions that now mark their relationship, the two politicians are "very different men," says Nisid Hajari, Asia editor for the Bloomberg View.

Among the strong, shared interests that bring the two leaders together to the White House this week, however, is a concern about "the rise of China within Asia," says Hajari, adding that Modi believes partnering with the US in defense helps "both countries counter that."

Not only are they talking about military coordination, but about co-producing arms in India as well. India has made the United States its main arms supplier — spending $14 billion over the past five years — but also spends heavily with French, Israeli and Russian suppliers.

Another area of potential cooperation has to do with climate change and investment in green technology.

"[Modi] also understands that while India needs to keep growing and still needs to bring electricity to a huge slot of the population, it can't afford to do so using coal-powered plants," Hajari says. "Modi is investing a lot of money into solar power in particular and that's something where he's hoping for technological help and investment from the US."

Officials played down the chances of major announcements during Modi's three-day visit to the US, but noted that India is very close to a deal with US electric giant Westinghouse to build a nuclear plant.

"There is a very detailed and advanced negotiation," Arun Singh, India's ambassador to the US, told reporters, adding that only the financing details of the plan remain to be agreed.

The multibillion-dollar deal to provide power to India's growing, energy-hungry populace had been on hold because of concerns about site safety in Modi's home state of Gujarat.

But a new location for the six-reactor plant has been found in Andhra Pradesh and concerns about insurance have been ironed out, Singh said.

Ahead of the trip, Indian Foreign Secretary Subrahmanyam Jaishankar told reporters Obama had invited Modi as one of the leaders with whom "he had a close and productive working relationship."

"So, in many ways you can say it is sort of a consolidation visit," he added.

Following Modi's visit with Obama, he'll hold meetings with US business leaders and members of the 3-million-strong Indian American community.

On Wednesday, he will become the fifth Indian premier to address a joint session of the US Congress, and afterwards will be hosted at a reception for dignitaries and lawmakers.