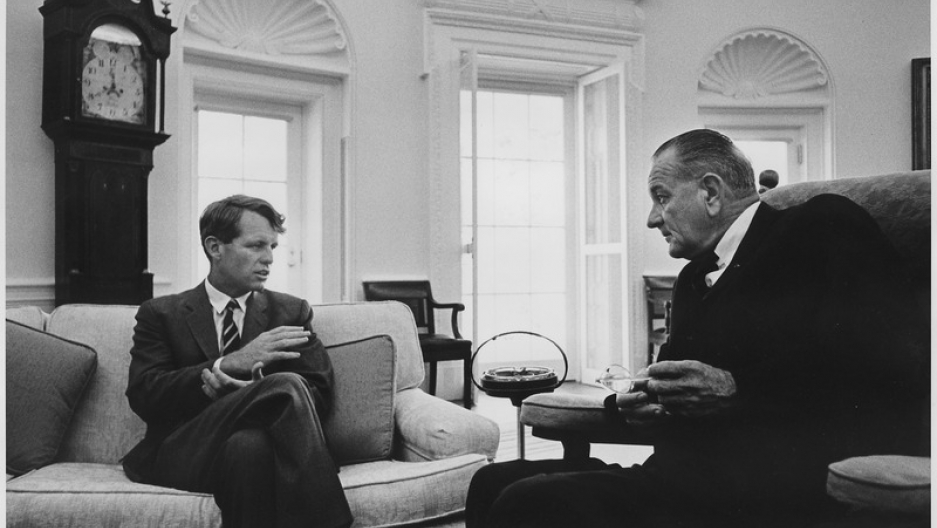 Senator Robert F. Kennedy speaking with President Lyndon B. Johnson on his return from a June 1966 visit to South Africa, where Kennedy delivered what many scholars consider his best speech ever.

Today marks the 50th anniversary of Senator Robert F. Kennedy's "Ripple of Hope" speech. Delivered at the University of Cape Town on June 6, 1966, during the height of apartheid; most believe RFK's "Ripple of Hope" address was the greatest speech of his life.

The fact that the trip to South Africa even took place could be considered a minor miracle. The senator’s invitation to speak came from South Africa’s Union of Students. The architect of apartheid — Dr. Hendrik Verwoerd — was the nation's prime minister, and Nelson Mandela remained in prison on Robben Island. The South African authorities made it clear they would not offer Senator Kennedy any security, many State Department officials were convinced his trip was ill-conceived and doomed to fail.

In his speech, Robert Kennedy spoke for those who were not free to speak. His gave hope to anti-apartheid student activists who had felt alone in their quest for racial equality, and he showed them how their efforts were connected to other civil rights movements underway around the world.

A snippet of his speech gives an idea of its uplift: "It is from numberless diverse acts of courage and belief that human history is shaped. Each time a man stands up for an ideal, or acts to improve the lot of others, or strikes out against injustice, he sends forth a tiny ripple of hope, and crossing each other from a million different centers of energy and daring those ripples build a current which can sweep down the mightiest walls of oppression and resistance."

Another segment: "We must recognize the full human equality of all of our people before God, before the law and in the councils of government. We must do this, not because it is economically advantageous, although it is; not because the laws of God command it, although they do; not because people in other lands wish it so. We must do it for the single and fundamental reason that it is the right thing to do."

Margaret Marshall, then an anti-apartheid student activist and later to become the chief justice of the top court in Massachusetts, was in the audience that day.

“It made such an impact on me," Marshall recalls. "I know it made an impact on others and I have essentially carried that message for the rest of my life — if we each just do one small thing when we are faced with evil or oppression or discrimination or inequality. You don't have to assume that you will be able to change the entire world. It was remarkable, it was breathtaking.”

This story was based on a segment of a PRI radio show, The Takeaway, which seeks to bring us all into the national conversation. Audio archive for this story comes from the JFK Presidential Library, the Miller Center and the Edward M. Kennedy Institute. It was provided to The Takeaway by producer Steve Atlas. His radio documentary, "We Knew JFK," can be heard here.