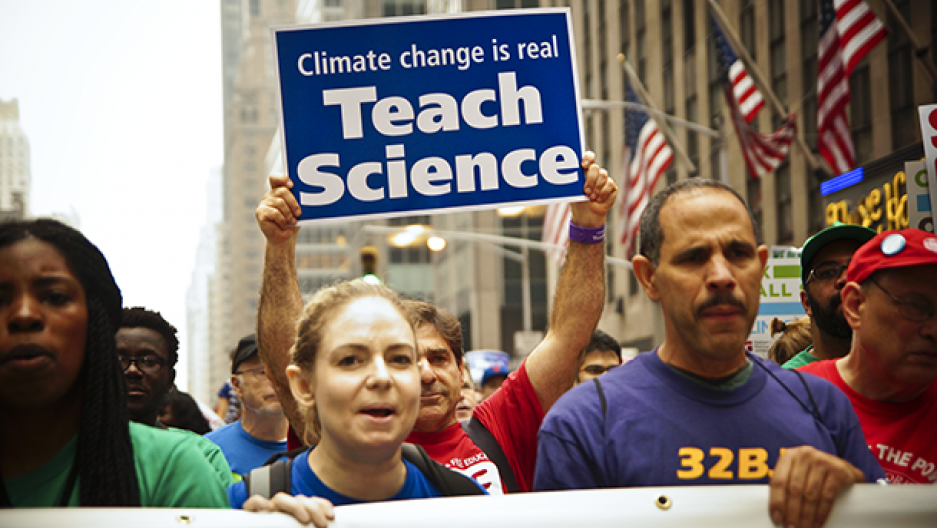 A rally for climate education
Credit:

A majority of Americans — about 64 percent — say they are worried about climate change, according to a recent Gallup poll. At the same time, other polling and survey data show that our public school systems are teaching students almost nothing about it.

A February survey published in the journal Science showed that most high school science teachers spend only an hour or two a year teaching about climate change. When they try to cover the subject, they often encounter pushback from residents like Bryan Eichfeld, a school board member in the Saucon Valley School District, south of Allentown, Penn.

Eichfeld calls climate change a hoax and a political issue. He wants textbooks that provide competing views. “That’s not what’s happening with climate change,” he says. “They are taking everything they can to prove that there’s climate change and ignoring the data that disproves it.”

Science teachers in Eichfeld’s own district, and at the national level, strongly dispute this idea. There is no “other side,” they say, this isn’t politics; it’s science, based on data and evidence.

Last month, members of the Quakertown area school board, north of Philadelphia, refused to order the environmental science and oceanography books requested by the district’s administration. They didn’t like that students would be taught climate change as a scientific fact. (Quakertown Board members declined to talk about this story.)

Minda Berbeco, a policy director with the National Center for Science Education, takes issue when school board members call the lack of balance unfair. “[What’s] really unfair is not to teach kids the accurate science,” she says. “It’s really unfair to not demonstrate what the evidence shows and what the data shows.”

“[The books] depict scientists as unsure,” Berbeco explains. "So, ‘scientists think,’ not ‘evidence shows’ or ‘research has shown.’ Students come away with a real misunderstanding of climate change. They think scientists are unsure about it; they think that there’s a controversy.”

Beyond textbooks, many teachers don’t know enough about climate change themselves and don’t feel confident teaching it, says David Evans, director of the National Science Teachers Association. He points out that the average teacher graduated in the early 1990s. “Honestly, 20 years ago, climate science — in fact most environmental science — was not very heavily featured in teacher preparation programs,” he says.

Plus, in states like Pennsylvania, the incentive to prepare and teach the subject is low. While some states have passed new science standards that include climate change, Pennsylvania has not. The Biology Keystone Exam, a test that teachers must prepare science students to take, doesn’t really address climate change either.

Science teacher Craig Whipkey, who faced opposition from residents and school board members in his western Pennsylvania school district for teaching climate science, says teachers choose to skip the subject for good reason.

Whipkey says it’s too bad, because young people will need to understand climate change to make informed decisions in the future. Still, he’s optimistic. He says the superintendent and school board members who gave him trouble when he first started teaching climate science ten years ago have all been replaced.

This article is based on a story by Julie Grant of the Pennsylvania public radio program, the Allegheny Front. The report aired on PRI’s Living on Earth with Steve Curwood.