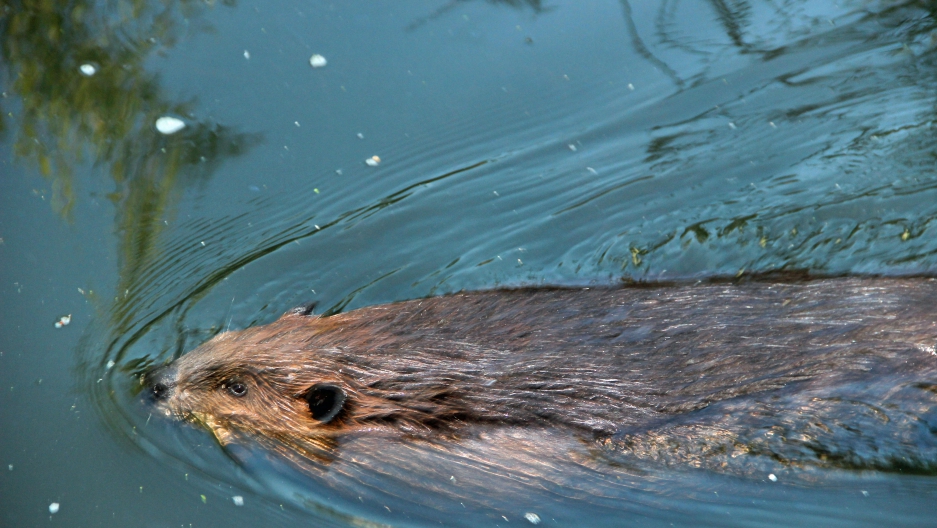 If you wait until the sun sets, when the dog park empties out and the path clears of cyclists, you might spot the newest residents of Vancouver's 2010 Olympic Village.

On this evening, they cautiously peek out their entrance. The coast is clear, so they head out for dinner. Dinner will be the usual — tree bark. 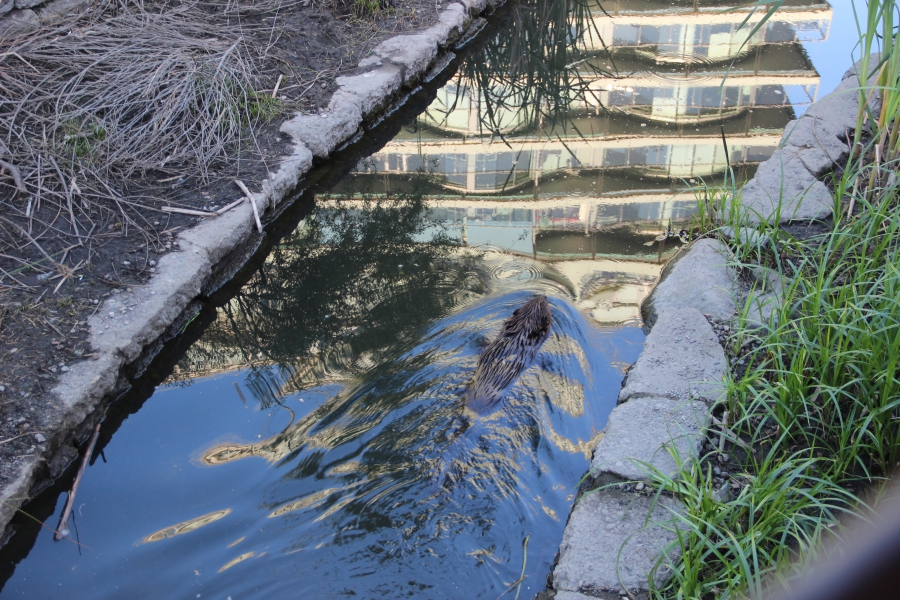 An urban beaver going for a swim in Vancouver's Hinge Park.

That's because the two new residents of Olympic Village are beavers.

They've settled into a lodge that they've built here, in a manmade pond surrounded by the high-rise apartments. 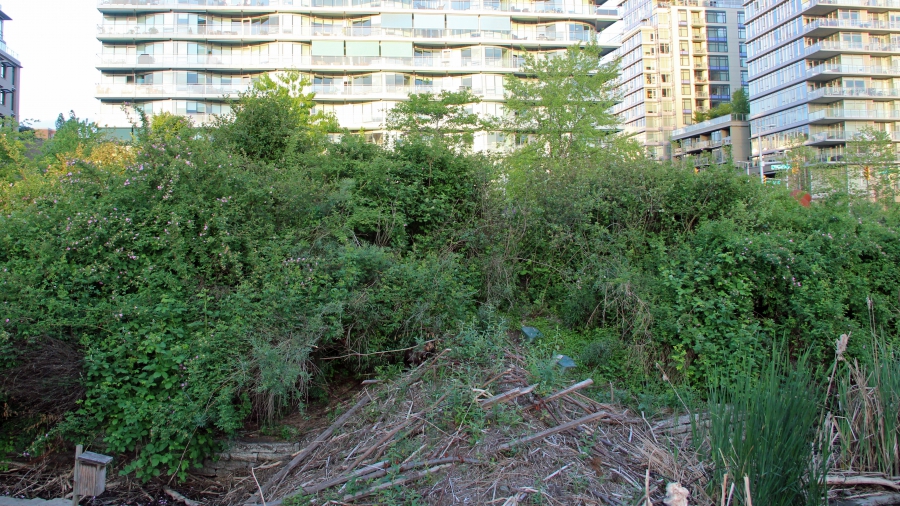 “We’re on Hinge Park which is on the edge of Olympic Village which is basically central in the city of Vancouver. We're looking at what is a classic beaver lodge, which is this mound of vegetation, sticks, mud, the beavers have dragged in from the wetland around it.” 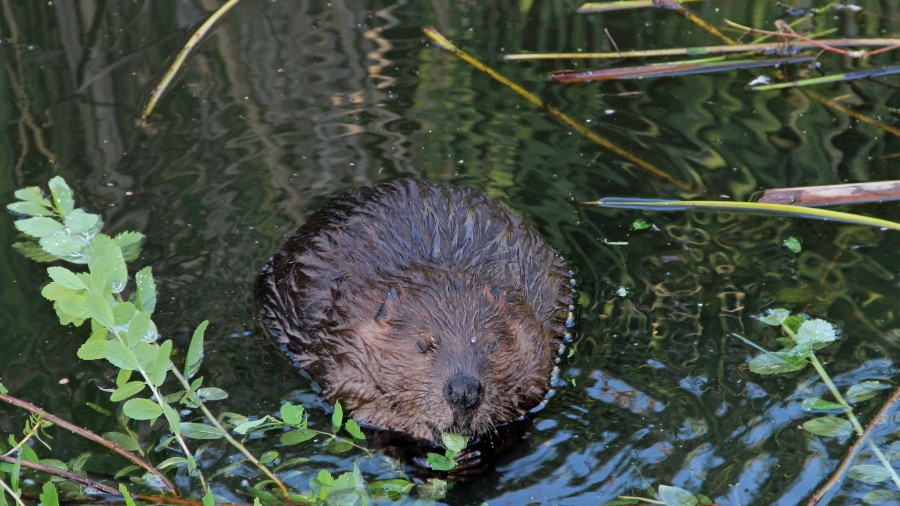 One of Vancouver's urban beavers.

Page keeps an eye on what the beavers are up to and, more importantly, what they're munching on.

Beavers eat the bark off of trees, so Page and his team have wrapped chicken wire around some of them. 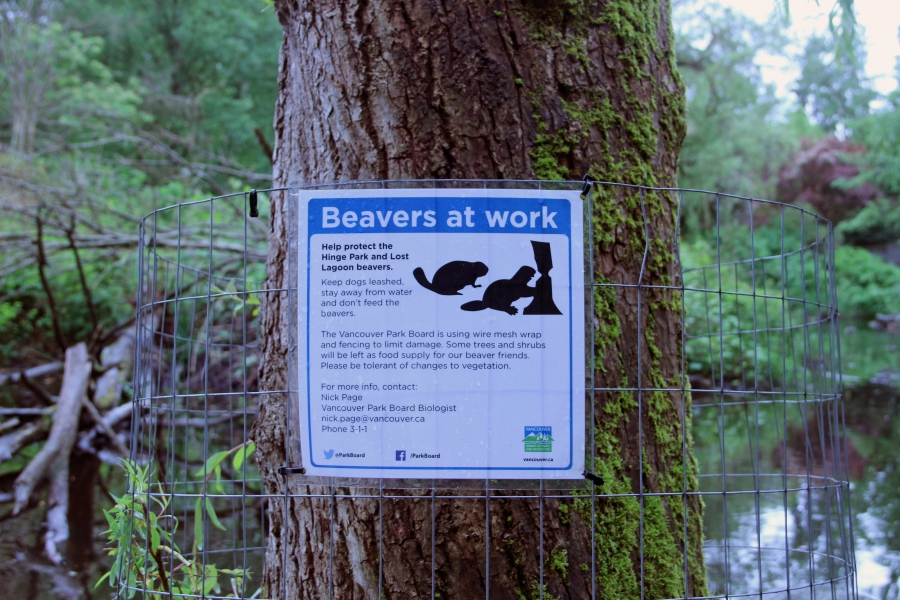 Mesh wire wrapped around a tree to protect it from beavers.

“We're wrapping the prominent trees. So we're basically trying to figure out a balance by tolerating what can be eaten by the beavers, but protect the larger trees, and we do that by wrapping them with wire mesh around the base as the beavers just can't physically eat them then.” 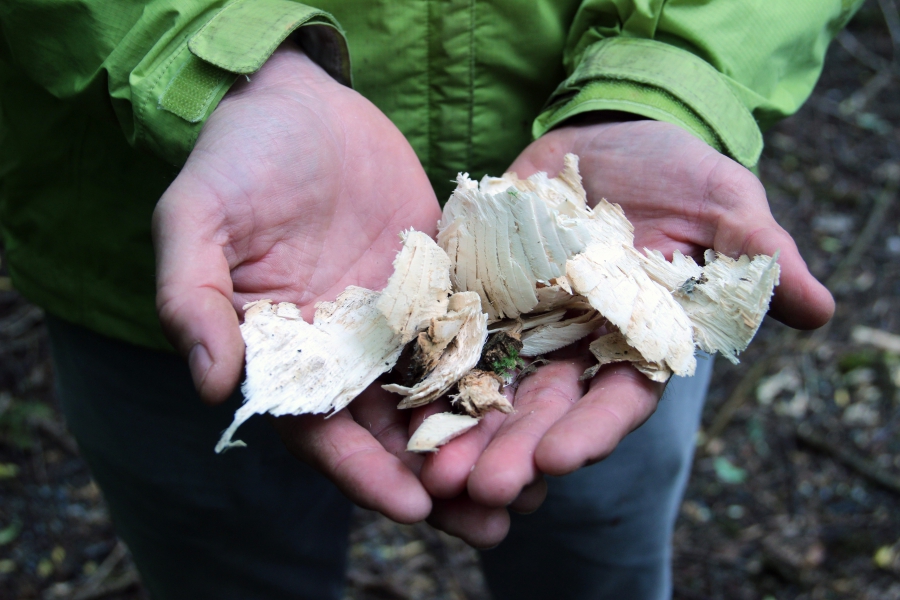 The Vancouver Park Board has what are referred to as “beaver deceivers.” They put metal cages around drainage pipes to stop the beavers from damming them. Flooding is a common problem in areas with beaver populations.

There are still trees that have clearly been gnawed on and water being dammed. But these beavers are riding a wave of popularity.

Members of the public post photos of the beavers going about their daily routine.

We finally met the beaver in #olympicvillage She was massive and didn't seem shy of humans in the slightest. pic.twitter.com/U2i3dTiy17

Page gets calls all the time from residents concerned that the pair is OK and has enough food. So far, so good. And the city isn't planning to move them to a more suburban spot.

“The population of beavers has expanded across the region. So in the past we would look at relocation — so you would live trap the beavers and then move them into another more natural habitat outside the city. And that's done under permit from the BC [British Columbia] Ministry of Environment ... Those options are no longer available to us, basically because of this large population throughout the region there is no habitat available to relocate them to.” 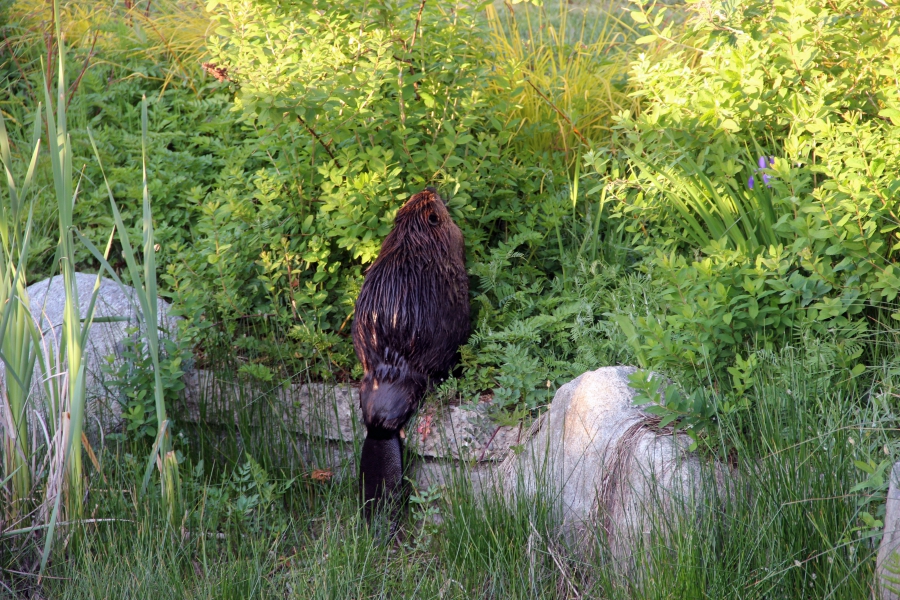 An urban beaver out for an evening meal.

There are beavers everywhere these days. But that hasn't always been the case. There was a time when the beaver population was being decimated.

“There was a big hat craze,” explains Frances Backhouse, author of Once They Were Hats, In Search of the Mighty Beaver.

She says European trappers capitalized on that beaver hat craze. “They were being wiped out everywhere. They just completely disappear from most of the states, from southern Canada and the estimate was that they were down to about 100,000 around 1900. So less than 1 percent of its original population after 300 years of trapping.”

Luckily for the beavers, those hats went out of fashion. Beavers are still trapped today, but in much smaller numbers — for their pelts — and a few other uses.

“Well there is castoreum,” explains Backhouse. "It's from a gland, the castor gland, which is in the nether regions of the beaver. It's used in perfumes, mostly and yes, in rare cases as a food additive. There is some kind of schnapps from Scandinavia that is flavored with castoreum as well.”

In Canada, the beaver has become an iconic symbol.

“Our first postage stamp had a beaver on it, the nickel has a beaver on it, all kinds of commercial enterprises that want to identify themselves as Canadian use beavers. You see beavers in cartoons all the time. We just think of ourselves as the beaver nation.” 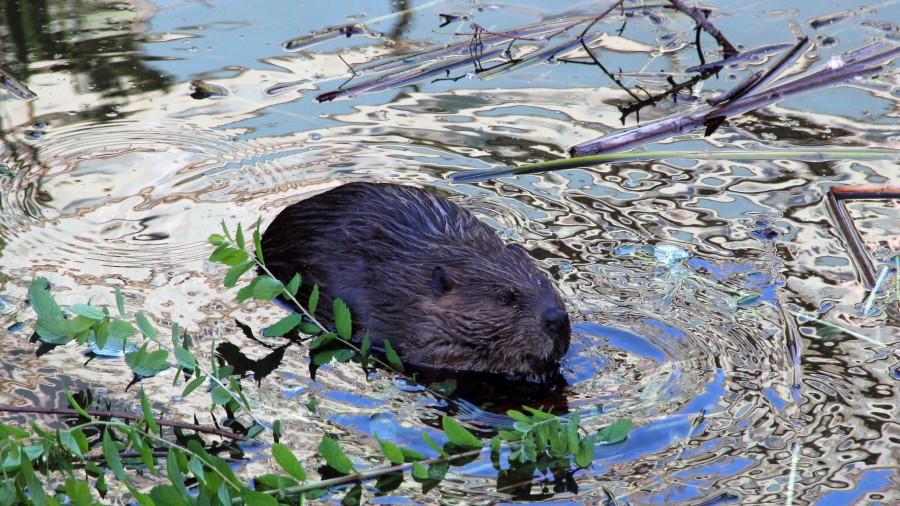 On this night, the beavers in Vancouver's former Olympic village are enjoying a swim around their circular pond.

They gnaw branches off of trees and drag them onto the top of the lodge.

Page says he expects there will be beaver kits born here soon.