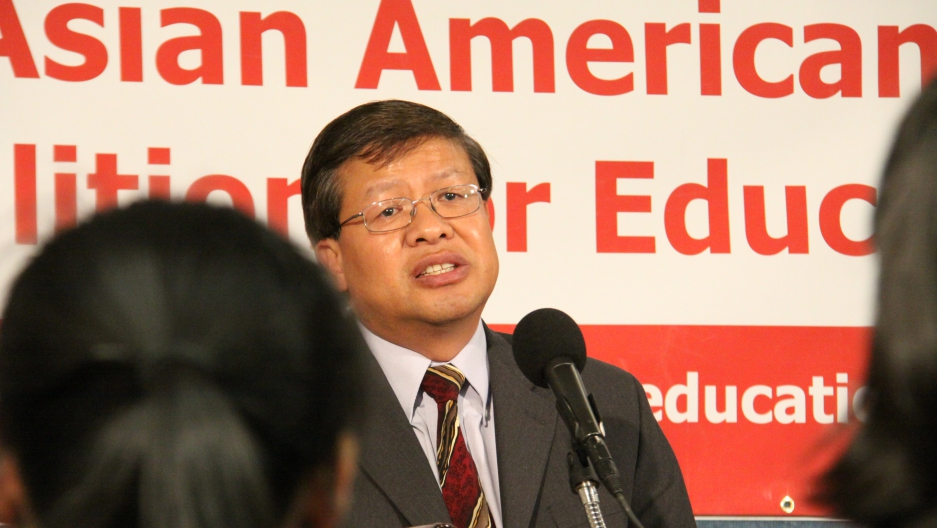 YuKong Zhao, president of the Asian American Coalition for Education, speaks at the National Press Club in Washington, DC.

Three Ivy League schools are alleged to have used racial quotas to limit the number of Asian American students admitted to their campuses. The Asian American Coalition for Education says Yale, Brown and Dartmouth have been doing this for at least a decade. The group recently filed a complaint with the federal government.

First some background: This isn’t the only complaint against Ivy League universities by the Asian American Coalition. Last year, it claimed Harvard holds the highest expectations for its Asian applicants.

The US Department of Education dismissed that complaint, but that didn’t stop the coalition.

“Asian American communities are going to continue our fight until you totally stop your unlawful discrimination against our children,” said coalition president YuKong Zhao, speaking at the National Press Club in Washington last month.

Zhao said the group is now asking the government to investigate admissions practices at Brown, Yale and Dartmouth, pointing to a study that concluded Asian Americans need to score higher than white, black and Hispanic students on the SAT to get into these schools.

“So this is clearly a compelling example of how Ivy League admissions officers apply just for Asians high standard against Asian American applicants,” Zhao said.

The coalition says while the population of college-aged Asian American has grown, the percentage of accepted students has flatlined. Officials at Yale, Brown and Dartmouth say the complaint doesn’t have any merit, and they point out that the number of Asian American students at these elite colleges still far outstrips their representation in the general population.

“I wish I was a fly on the wall at one of those admissions offices to find out what’s going on,” says Aaron Lewis, a guidance counselor at Newton South High School just west of Boston, where more than 20 percent of the students here are Asian American.

“It’s hard to say because especially in Newton kids get into mostly the schools that they really want to and they deserve to get into because they work so hard,” Lewis says.

While some families are looking for any edge in the college admissions game, Lewis says he never tells his Asian American students that they might benefit from not checking the box indicating their race or ethnicity. Instead, he urges all of his students to relax and to find a school that’s a good fit.

Xie is Chinese-American and says she thinks some Asian American groups get too caught up on the idea of discrimination at big-name schools.

Still, Xie admits she can get anxious about where to go to school.

“I get pressure from my parents,” Xie says. “They’re like, 'Oh, you should go to a good school, but no pressure!'”

No pressure, until she begins applying to colleges next year, any way.

By then, the coalition hopes Xie’s race won’t play any role in where she goes.