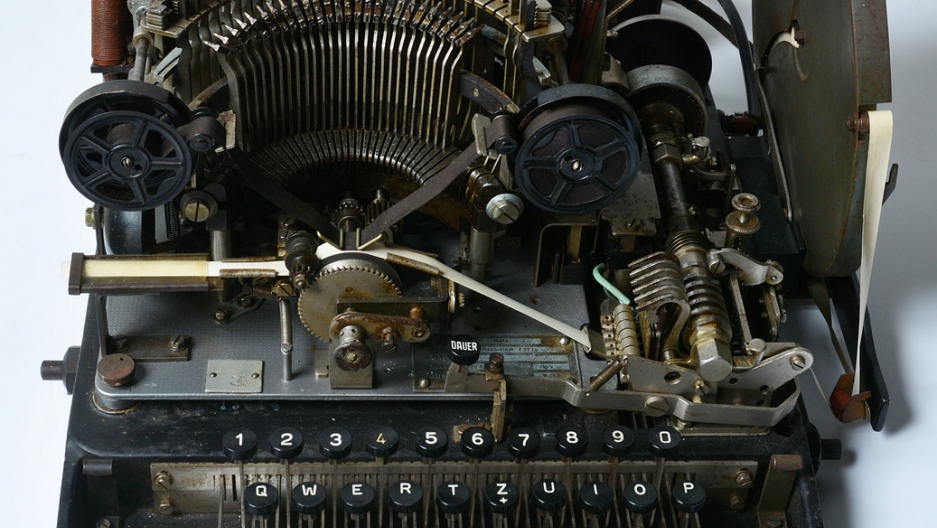 The Lorenz teleprinter which was found languishing in a shed in England. The National Museum  of Computing at Bletchley Park bought it for $14

The story of the Enigma machine is pretty well known. It was a cipher used by the Nazis to send coded messages during World War II. The Brits cracked the machine and the war ended a lot sooner than it otherwise might have.

But the Germans had another, vastly more complicated cipher, which they used to send higher-level strategic messages between Nazi commanders and to Hitler himself.

This was known as the Lorenz machine.

The Nazis deliberately destroyed many of the machines after the war, and they are still extremely rare.

Yet a Lorenz teleprinter recently appeared on eBay for 9.50 pounds (about $14).

By chance, a volunteer at the National Museum of Computing at Bletchley Park spotted the device, and immediately snapped it up.

John Whetter, an engineer at the museum, drove to the seller's house in Essex to collect it. He said he found the machine in a garden shed buried under “a lot of sacks and polythene bags.”

It wasn’t until the teleprinter was back at the museum that the staff realized its significance.

“We cleaned it up and recognized it was a military version,” said Whetter. “You could tell because there was a plate on the chassis which carried the German swastika and eagle, as well as the military code number.”

The Lorenz SZ42 encryption machine, which is currently on loan to the National Museum of Computing in Britain. It will be used with the teleprinter to give a demonstration of how the machine worked during WWII.

According to Whetter, the Lorenz was “extremely important” to the Nazis, as it was used to carry the “highest level of intelligence.”

It was therefore designed to be as complex as possible. The Lorenz company, which manufactured the device, described it as “unbreakable.”

“It was extremely complicated,” Whetter said. “It was probably 100 times more complex than the Enigma. Each message was uniquely encrypted and there were 12 different rotors.”

Despite this, mathematicians at Bletchley Park were eventually able to crack the Lorenz.

A German mistake, by which two slightly different messages were sent with the same encryption settings, gave the team something to work with.

Bill Tutte, a young mathematician from Cambridge University, managed to figure out the complete logical structure of the Lorenz without ever seeing the machine itself. It took him three months using calculations with pen and paper.

This breakthrough allowed staff at Bletchley Park to use Colossus, the first ever programmable computer, to break down high-level German messages being sent with the Lorenz.

“It has been accredited as the greatest intellectual feat of World War II,” said Whetter. “It saved hundreds of thousands of lives and arguably shortened the war by one or two years.”

The rebuild of Colossus, the world's first programmable computer. It was used to calculate the wheel settings on each message sent by a Lorenz machine, enabling Nazi communication to be cracked.

Engineers at the National Museum of Computing have now restored the teleprinter to full working order. The museum has acquired the other components of the Lorenz machine, and will give a full demonstration at a special event Friday.

A group of Bletchley Park veterans, many of whom are now in their 90s, will see the machine they were trying to crack during World War II in its entirety for the first time.

“It’s going to be a fascinating event,” Whetter said. “It will enable us to see both sides of the equation — how the Germans used this equipment in wartime and how we managed to decrypt it.”