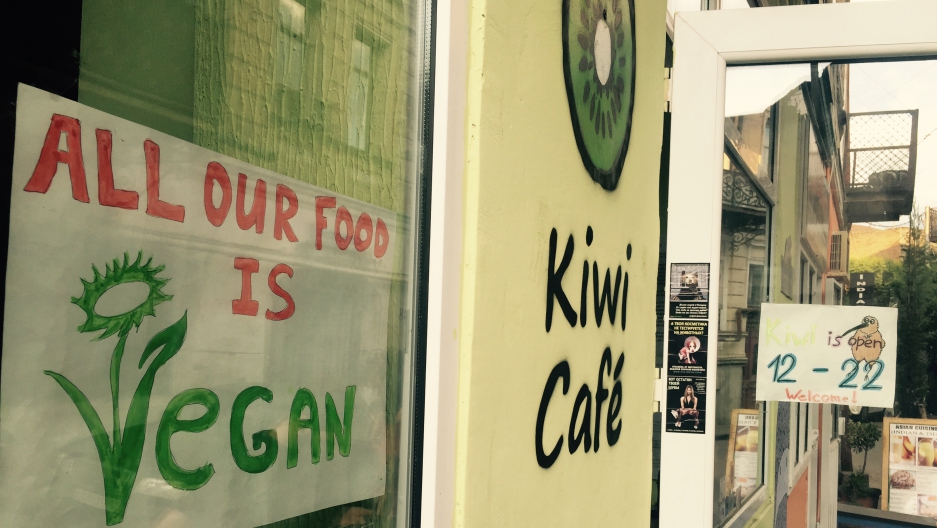 “The neighbors don’t like us,” say Egoo and Skvo, the owners of the Kiwi Café. (They prefer to be called by those one-word nicknames.) The vegan cafe would not look out of place in Portland, Oregon, but it actually sits in the historic heart of Tbilisi, the capital of the former Soviet republic of Georgia. “We’ve got piercings; we’ve got tattoos; we’ve got dreadlocks. They think we’re weird. They think we’re dirty.”

The not-for profit cafe was raided by 10 to 15 meat-wielding men on Sunday. It was movie night, and the cafe’s five or six tables were packed, when the men came in.

“Some of them,” says reporter Natalia Antelava, “bizarrely, were wearing sausage necklaces around their necks, and carrying pieces of meat that they started throwing at the plates of the people at the cafe.” They also started hurling insults.

It ended in a brawl, and four of the cafe’s employees were hurt. The assailants escaped before police arrived.

The police were not very sympathetic, according to witnesses. An investigation has gotten underway, but no one has been charged.

Egoo and Skvo say they have been "quite traumatized" by the incident.

Suspicion for the attack has fallen on two little-known right-wing groups, but there has been no claim of responsibility. Kiwi Café said in a Facebook post that the attackers were neo-Nazis. 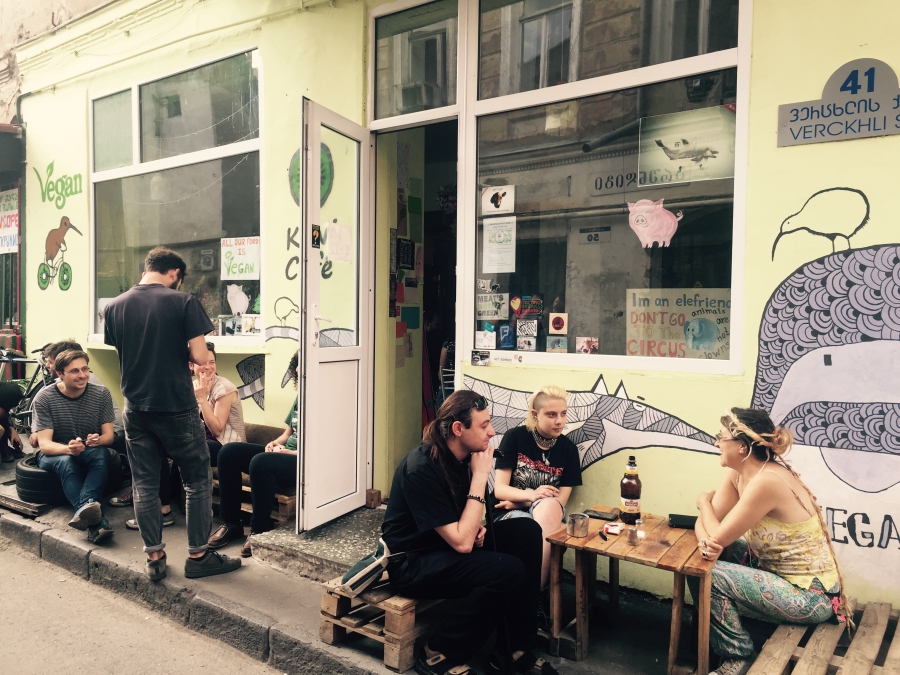 Georgia is a pretty conservative place.

“Weird as it all is,” says Antelava, “the raid somehow fits into the reality of today’s Georgia, a country which has moved very quickly towards democratization, and has changed a lot in the last two years. But at the same time it’s very traditional, very orthodox Christian, very unwilling to let go of its traditions.”

The hostility toward the cafe and its clientele “is very much the same sentiment that drives the anti-gay violence here,” adds Antelava. “It’s not as bad as some of the other places in the former Soviet Union, but it’s certainly getting worse, this intolerance towards anything that is different.”

“In that sense, suddenly portraying meat as a great protector of Georgian traditions, on some bizarre level, it actually sort of makes sense. It’s the same people who say, you know, ‘Oh no, we can’t embrace the West, because they allow homosexuality and that’s just unacceptable.'”