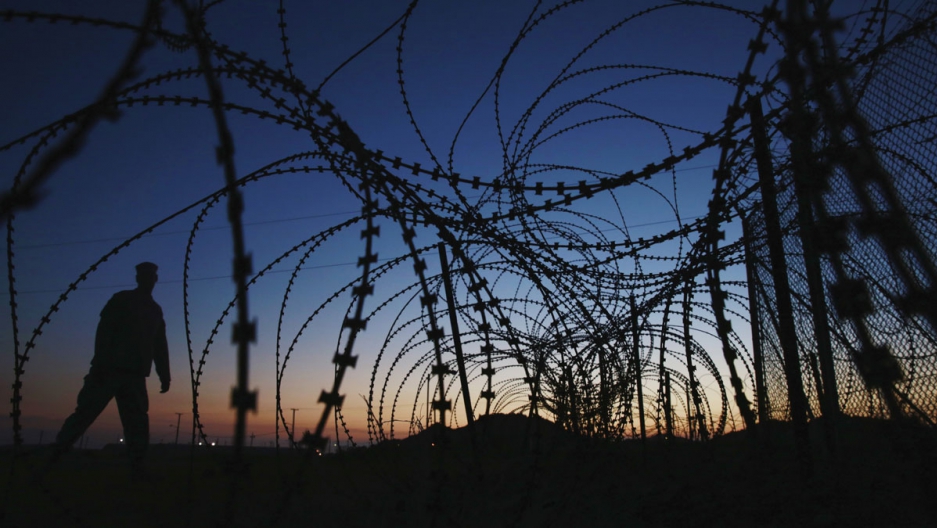 A soldier walks past concertina wire surrounding the outside of Joint Task Force Guantanamo's Camp Delta at the US Naval Base in Guantanamo Bay.

The war court at Guantanamo Bay, Cuba has resumed pre-trial hearings in the prosecution of 9/11 mastermind Khalid Sheikh Mohammed, who is being tried along with four co-defendants accused of supporting the terrorist attacks.

The start of an actual trial appears no closer than it did three years ago. And the battles playing out in the courtroom have been less about the criminality of the 9/11 attacks and more about how to balance the defendants’ right to material that is essential to their defense with national security concerns.

That struggle has played out since the very beginning of the trial. The court had to deal with the discovery of hidden microphones in rooms where the defendants had confidential talks with their lawyers; authorities "ransacking" the defendants’ cells while they were in court; and a mysterious, invisible censor shutting down audio feeds from the courtroom, to the confusion of the judge.

The hearings were suspended for a year-and-a-half after one of the defense attorneys for Ramzi bin al-Shibh, who is accused of being a key planner of the attacks, relayed a message from their client to his family in Yemen. Worried that it could be a coded message, another defense attorney alerted the FBI.

The investigation concluded without charges being filed, but bin-al Shibh’s lead attorney, Jim Harrington, said he ultimately had to fire five members of the team who were providing information to the FBI without his knowledge. Harrington also said that the defense was so compromised by the incident he may have to step down or obtain a waiver from the judge to remain in spite of a perceived conflict of interest.

This week, one focus of the sessions will be establishing the rights of the accused to present evidence of their abuse at the hands of the US government — the details of waterboarding, forced enemas and other ill treatment to which Mohammed and the others were subjected.

Just two weeks ago, Mohammed’s defense team filed a motion asking the prosecutors and the judge to step down, for destroying evidence. The motion is sealed and lawyers say they are unable to discuss what evidence was destroyed, but based upon previous motions calling for the preservation of evidence related to the CIA “black sites” where these men were tortured, most observers suspect the destroyed evidence is related to the black sites.

The court will also be examining complaints about the detainees' treatment at the naval facility at Guantanamo Bay. Bin al-Shibh has repeatedly complained that he has been purposely tormented by vibrations and noises in his prison cell. The court will be examining his complaint this week — and may even call as a witness Abu Zubaydah, who bin al-Shibh claimed would corroborate his claims. If Zubaydah appears, it will be the first time since his capture that the al-Qaeda member who was subjected to some of the CIA's harshest interrogation techniques has been seen in public.

When you step back from the legal details, what’s remarkable is that the trial at this stage is no longer about 9/11 and the plot that killed thousands of Americans. It’s almost become a forum to debate how America deals with what the Bush administration called "enhanced interrogation techniques" — what most authorities now call "torture."

At this point, defense attorney Harrington won’t even hazard a guess as to when the actual trial to determine the guilt or innocence of these men will start. “It gets farther and farther away each day,” he said.

Arun Rath is a reporter for WGBH and NPR and for the last few years, he has been following the Guantanamo trials for Frontline. He is tweeting from Guantanamo here.