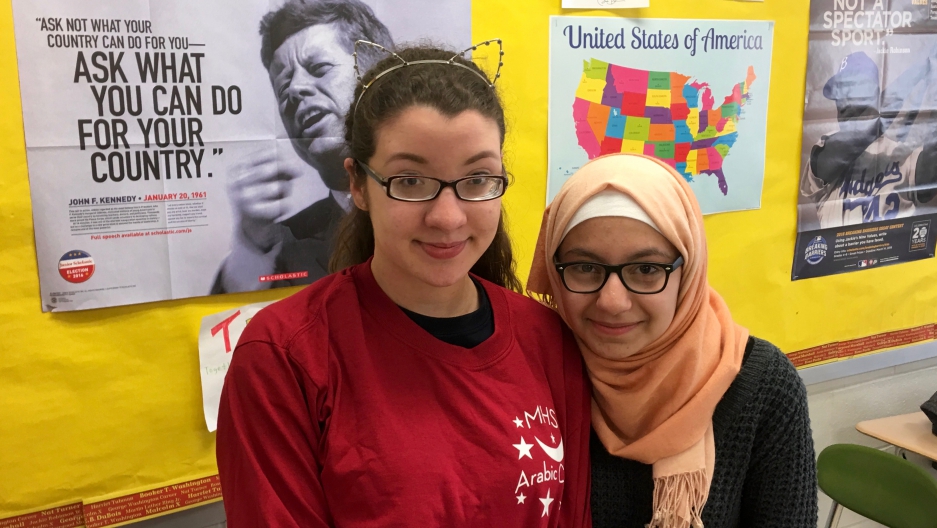 Naiara Zerlotini (left) and Sophia Chalabi were disappointed when Hijab Day at Medford High School was called off.

Students from the Arabic Club at the public high school in the city of Medford, about a 15-minute drive north of downtown Boston, wanted to participate in “World Hijab Day” early this semester.

The annual event was created in 2013 to promote awareness and understanding of Muslim women who wear the headscarf as an expression of their faith. At Medford High, the plan was pretty straightforward.

Anyone interested, students or teachers, could participate by wearing a Muslim-style headscarf during the school day. The girls could wear a hijab, and boys could put on a turban. Then there would be an after-school assembly for discussion.

Students from the Arabic Club, some of them are Muslims but not all of them, went to the headmaster and got permission to host the event. The date was set for February 1.

But soon after Hijab Day was announced, the Medford public got wind of it. And there was a wave of phone messages, emails and social media posts directed at school and city officials.

The volume — and the tone — of the backlash took high school headmaster John Perella by surprise.

“There was a whole spectrum of responses, you know, from mildly concerned to, you know, people that completely got it wrong. They missed the whole boat, to what we were trying to do,” Perella says.

Perella says he partly blames himself for not being more thoughtful about notifying the community well in advance of Hijab Day. When the students came to him with their plans, Perella says he was impressed and that his initial instincts were to help them make it happen.

“They were really organized,” Perella says. “The whole idea of it was really [to] develop empathy and to give voice to a minority group in our building that does not typically have voice.”

Nearly all of the complaints about Hijab Day directed at the high school were made anonymously, Perella says. But some of them were apparently downright angry. There were accusations that the administration had agreed to allow Muslims to proselytize in school, which Perella says was simply not the case.

An op-ed published in the Medford Transcript by Medford resident Anthony D’Antonio criticized the planned event as, “a latent religious exhibition.”

The op-ed goes on to blame, “a politically correct, progressive liberal populous,” along with “outsiders and socially disruptive antagonists who wish to destroy America.” [D’Antonio did not respond to an interview request for this story.]

Ninth-grader Sophia Chalabi is one of a handful of students at Medford high who wears a headscarf to school. Her family is originally from Syria. Chalabi says Hijab Day seemed like a good way for other students to learn about the hijab as one aspect of Muslim culture.

Chalabi says she’s never been the target of direct discrimination in Medford. But there was an awkward moment at school in the days after the Paris attacks last year, when everyone took part in a minute of silence for the victims.

“There were people in my homeroom looking at me, and I was like, ‘Really?’ Chalabi says. “Don’t look at me. I wasn’t there [in Paris].”

The superintendent of schools in Medford, Roy Belson, says he liked the idea of Hijab Day, too. But the whole public relations fiasco was a reminder that it really matters how these sorts of events have to be handled by officials.

“We have to respect the sensitivities of the community. We have to understand that there are people who aren’t with us yet, who don’t understand these things yet. And we can make our situation a lot worse if we don’t take the time and work with them,” Belson says.

But Belson says he feels it’s vital for students to be able to express their identity — even their religious identity — in the schools. The 69-year-old superintendent grew up in Medford, which is overwhelmingly Catholic and Protestant. He’s from a Jewish family and he says that being part of a religious minority in Medford was not always easy.

“I was walking down Lawrence Road to the temple,” Belson recalls. “And I remember there was a boy who was in the school with me who called me some inappropriate names, using my religion, and then punched me.”

Belson says he ended up with “a black eye and also had a couple of other injuries.” And the worst thing of all, he says, there was “a police officer on the corner who did nothing.”

Students from the Arabic Club were disappointed when the administration persuaded them to call off Hijab Day.

“I actually was in tears,” says 17-year-old student Naiara Zerlotini. “I was kind of secretly hoping that people would be more tolerant.”

But in another way, the event has been a success. Over the last few months, high school students have been taking part in a series of public meetings to talk about religious diversity. They’ve included faculty and administrators from the high school, city officials and local clergy. 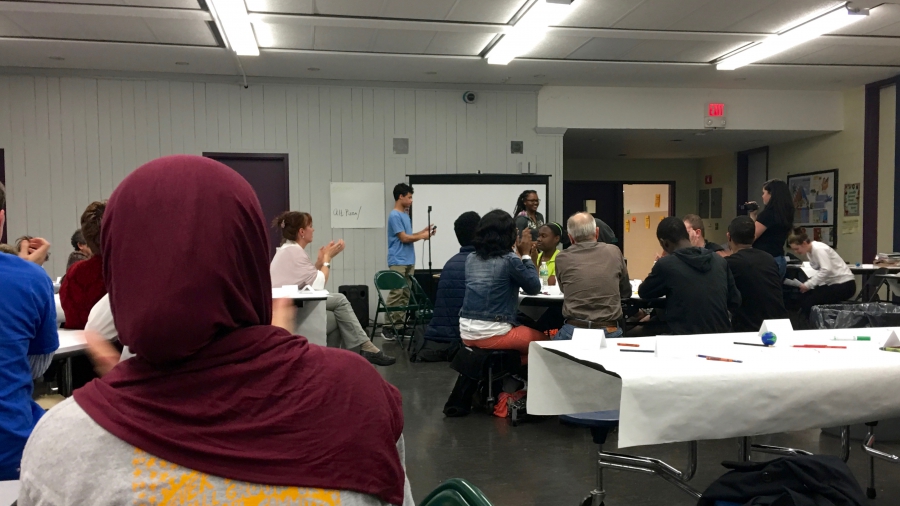 Medford students have been taking part in a series of public meetings with city officials, community members and local clergy about religious diversity.

High school senior Simon Ospenson says he was shocked when Hijab Day was put on hold. “But I think the net impact has definitely been positive,” he says. “Because you have this dialogue, …and the ability to say that we can get together and talk about this.”

It’s not clear if Hijab Day will be on the calendar at Medford High School again next year. But one thing that’s come out of the community dialogue already is a plan at City Hall to host an Iftar dinner one evening in June during the upcoming Muslim holy month of Ramadan.