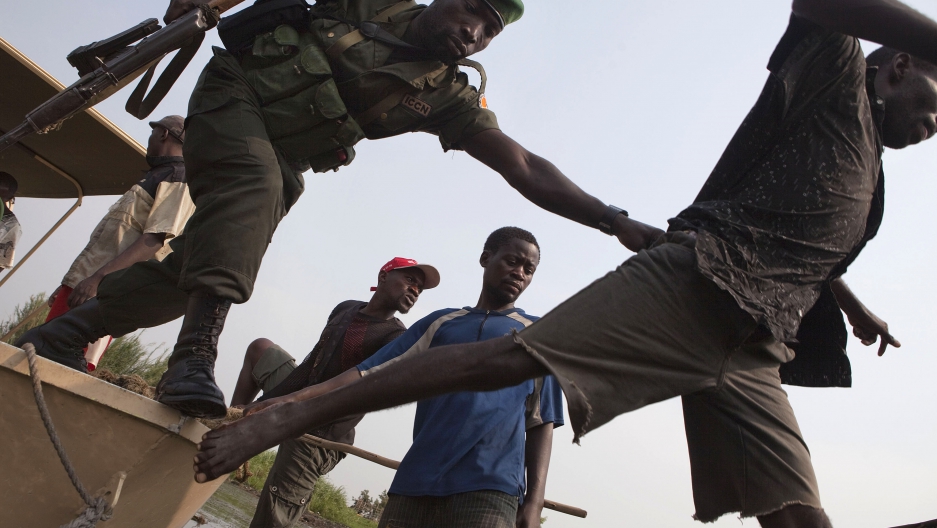 Rangers from the Congolese Institute for the Conservation of Nature (ICCN) take into custody a man who was fishing illegally in the protected waters of Virunga National Park in eastern Congo in 2010.

It could easily happen again. And every time it does, her family has to start all over.

Burasa lives in Rumangabo, Democratic Republic of Congo, where the Virunga National Park is headquartered. The 3,000-square-mile forest is probably best-known for being home to a quarter of the world’s mountain gorillas. But it’s also occupied by a menacing number of armed groups involved in the region’s conflicts, taking cover in the dense vegetation.

That pits them directly against park staff, who are tasked with protecting the natural resources and animals inside Virunga. Wildlife rangers, most of whom are men, are frequently targeted for violence. In the last decade, 150 of them have been killed.

“Our rangers continue to bear the brunt of the instability in eastern Congo,” Merode said in March, doing “the most dangerous conservation job in the world.” 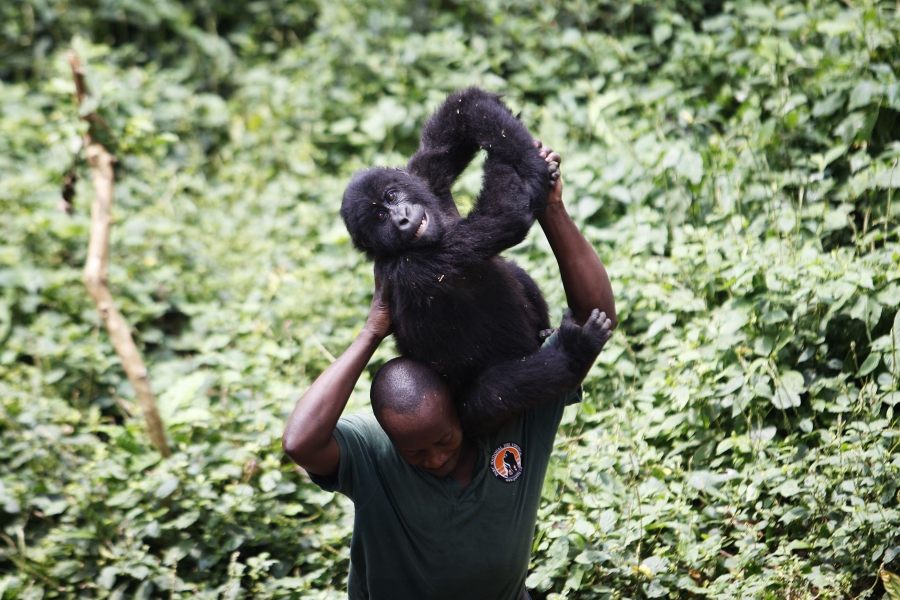 The rangers’ jobs are difficult, to be sure. But sometimes the work is even harder on their wives.

Frequently on their own at home on the fringes of the forest while their husbands are patrolling, these women face regular harassment and displacement. Armed groups threaten to invade their villages seeking resources; meanwhile, villagers frustrated when anti-poaching efforts interfere with their lives target rangers’ spouses for revenge.

The women face neighbors who blame them when park animals destroy crops — shouldn’t your husband keep them out of our space? — or when rangers arrest villagers for poaching. Sometimes the villagers will prevent the wives of rangers from using communal water sources, said Burasa. Jaqueline Bavukahe’s neighbors went even further, killing her goat when it got loose, a huge loss for the 34-year-old mother of nine.

That’s all on top of the stress of being married to someone working a dangerous job.

“Every time when rangers who are our husbands are on patrol, we are permanently in stress,” Burasa said. “Because we don’t know if they will be back safely.” 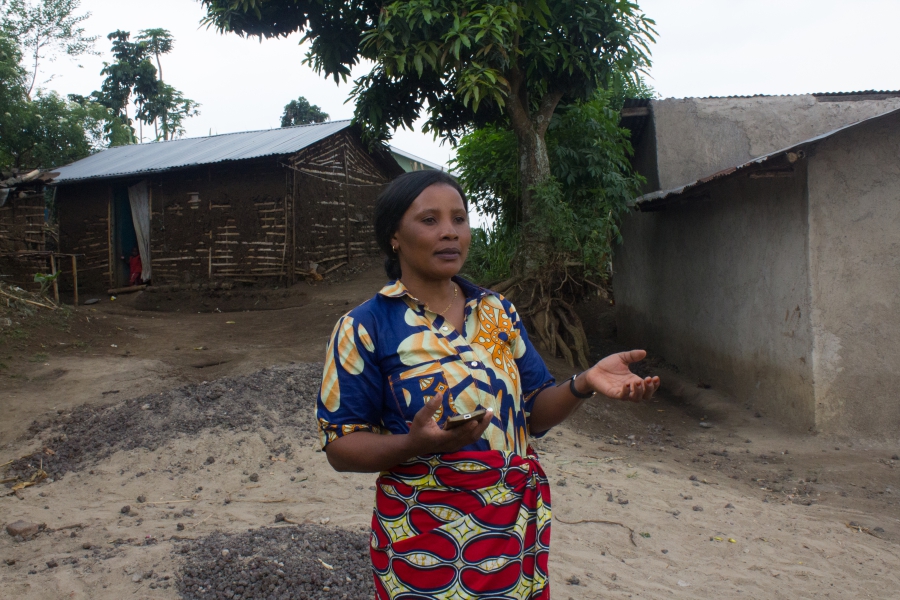 Aline Burasa stands in her neighborhood in Rumangabo, Democratic Republic of Congo, where the Virunga National Park is also headquartered.

For everyone living here, violence is ever-present. Between 2006 and 2008, Burasa and her neighbors were twice forced out by warlord Laurent Nkunda.

A decade ago, the women tried to solve some of their problems by forming an agriculture collective. They hoped to grow their economic resilience and to create new employment options in the village, for themselves and for their neighbors.

The struggle to make the Association des Femmes de Gardes de Rumangabo succeed, however, has been intense. The inaugural chick-loaning program in 2006 didn’t survive Nkunda’s onslaught. Each time Burasa returned after fleeing, “nothing was left.” The crops, animals, equipment — it was all gone.

“Even our houses sometimes were destroyed,” said Burasa, who is 40 and has seven children. “They [used] the doors for firewood.” 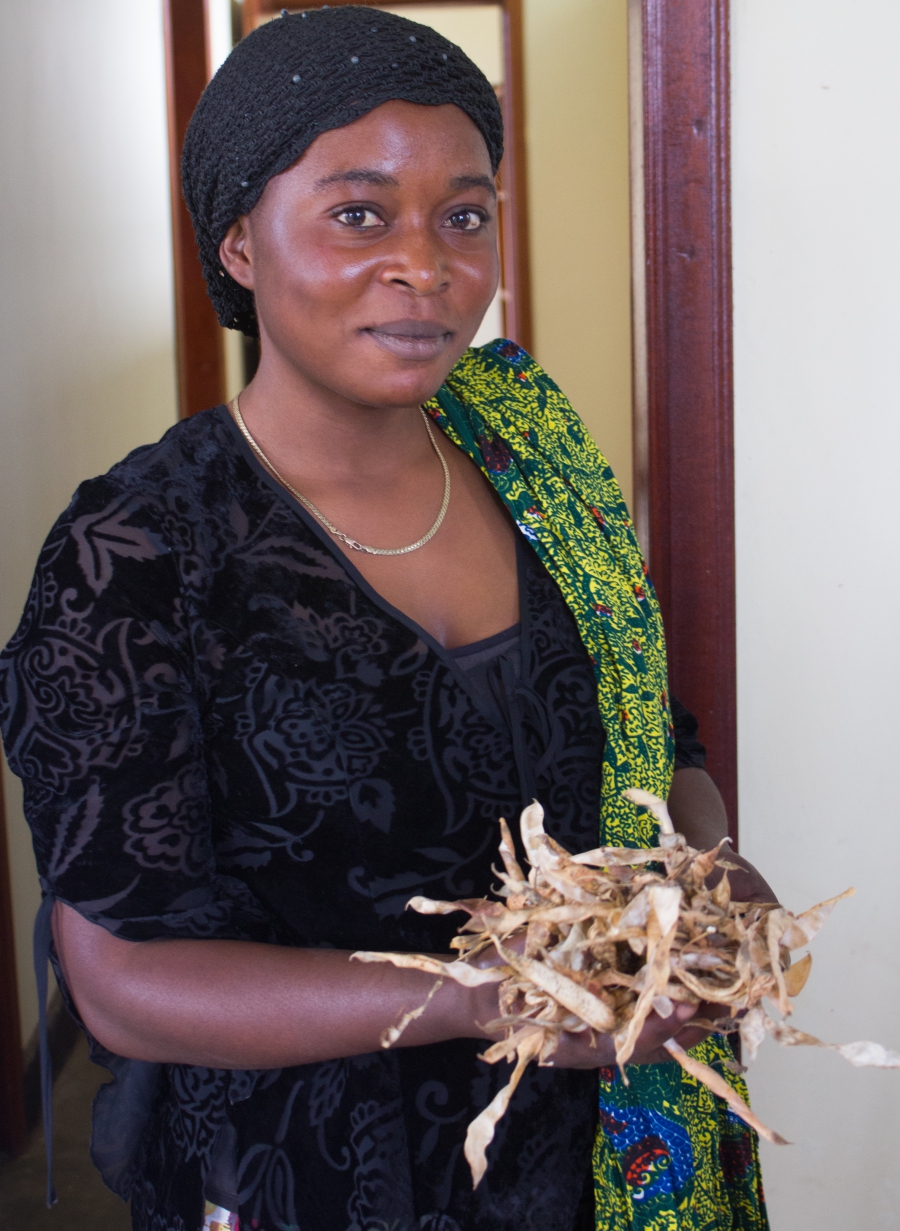 Jeanique Kavundahire is the wife of a Virunga National Park ranger. She joined an agriculture group of rangers’ wives three years ago. She holds the dried leaves they use to grow mushrooms in bags.

The women had to start from scratch most recently in 2012, after the rebel group M23 pushed them out of the village.

But they’ve now discovered a crop that might actually withstand the impact of violent raids: Mushrooms.

That’s mainly because fungi can be grown easily indoors, where crops are much safer from marauding rebels (and baboons). They can be cultivated relatively quickly, and require very little equipment to tend. Conservationists, meanwhile, like that the scheme helps keep people from venturing inside the forest to collect wild mushrooms.

The collective, helped by the Greater Virunga Transboundary Collaboration (IGCP) and Norway's embassy in Uganda, now grows mushrooms in a five-bedroom house, using separate rooms for seed storage, accounting and crop development. Still in its infancy, the latest version of the project generates only 10 kilograms of mushrooms a month, which the group’s 28 members sell for a total of $20. The house, said Altor Musema, IGCP DRC program coordinator, is just a pilot project — “a demonstration place where everybody can see, learn and do themselves.”

But his hope is that it’ll take off. “The end [goal] is to have every household cultivating mushrooms,” said Musema.

Emerance Sekibibi, 65, has more modest goals. She has been with the group since the beginning. Her husband is no longer an active ranger and five of her 10 children are deceased, one lost during the conflicts. The surviving children are grown, but now there are grandchildren to feed and send to school.

She and Burasa both hope the mushrooms will be another project the group can use to help fund basic needs. It is a lot of work for little return, but the women also think it’s a venture that can be restarted again in the event they have to flee. 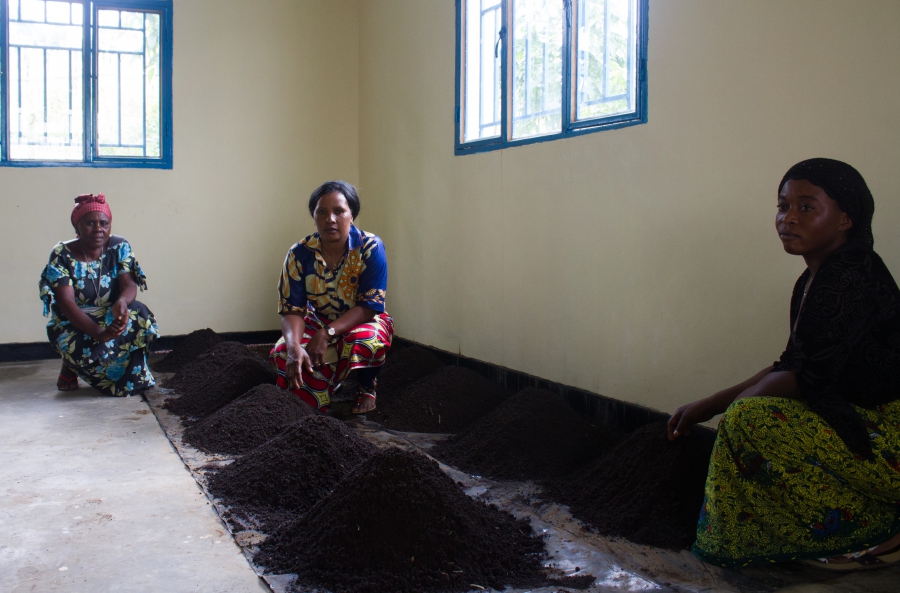 Left to right: Emerance Sekibibi, Aline Burasa and Jeanique Kavundahire sit by the dirt mounds where they will replant their mushroom crop.

They know better than to hope for much more.

“The way we live, we don’t always have enough money for food,” Jaqueline Bavukahe said. “This mushroom, as I know already how to [grow] it, it can complement what my husband gives me.”