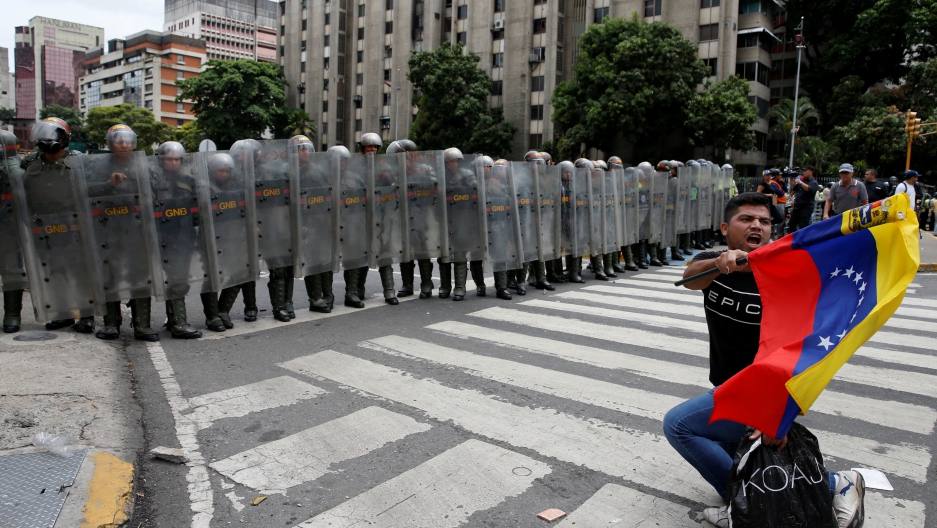 An opposition supporter carrying a Venezuelan flag kneels in front of National Guards during a rally to demand a referendum to remove President Nicolas Maduro in Caracas, Venezuela, May 18, 2016.

When Luis got home last month after four months in the US, he had to unpack his bags by candlelight.

He had taken the trip to hone his English, and to look for work that would grant him a visa allowing him to live in the US. It took him months to save for the trip.

But ultimately, the only job offer he received would’ve required him to live and work illegally in Washington, DC.

Despite having some of the world's largest oil deposits, electrical outages like this one — as well as widespread food shortages — are sadly the norm in today's Venezuela. The country's economy contracted 5.7 percent last year, and now faces triple-digit inflation.

People line up for hours for a shot at buying even the most basic food, medicine and supplies. 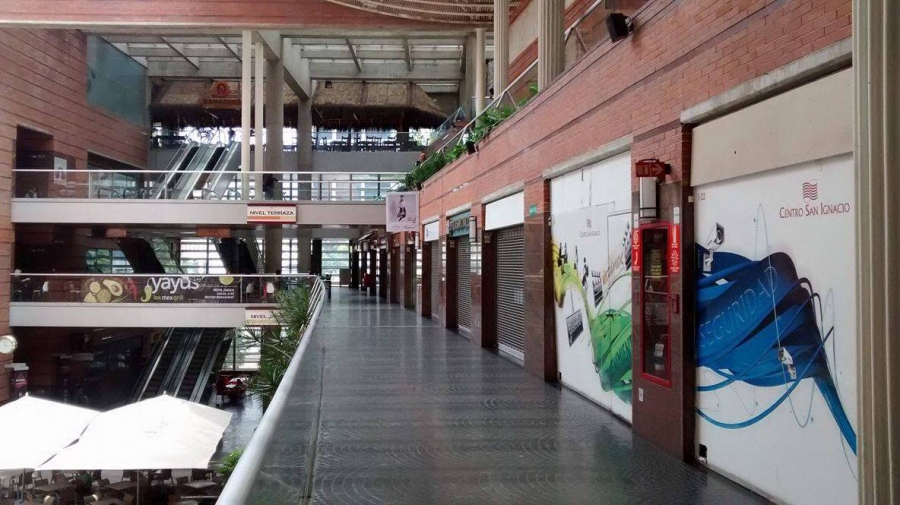 Centro San Ignacio, like other malls in Venezuela, is only open from 12 p.m. to 7 p.m. becuase of power shortages.

President Nicolás Maduro blames the El Niño climate effect for a drought that has starved the hydroelectric power supply. And the economic troubles? He claims it’s the result of foreign (namely US) interference as well as the country's business elite attempting to "sabotage the country".

His critics contend that the outages and shortages are just another sign of the government's incompetence and economic mismanagement.

Having taken back the country's unicameral parliament in a decisive win in December, the opposition is now pushing for a recall referendum on Maduro’s presidency.

At 27 years old, Luis has lived most of his life under the socialists' rule.

Both of his parents are dedicated "Chavistas" — a common nickname for loyalists of the current government, which was founded by the late Hugo Chávez and has ruled Venezuela for 17 years.

He, however, is not.

And as Venezuela spirals into economic and social chaos, Luis — like so many before him — is trying to get out.

A model democracy in Latin America for decades, Venezuela has been ruled by the Chavistas since coming to power in the late 1990s, riding a wave of support from the poor and working classes. Today, the country is rife with violent crime, hospitals are stretched thin, and the economy is on the verge of collapse.

A recent study concluded that the capital, Caracas, was the most homicidal city in the world.

With the conditions growing starker by the day, many people who have any chance of leaving are taking it.

Dr. Tomas Paez, a sociologist at the Central University of Caracas who studies immigration, says there are about 1.5 million Venezuelans living outside their home country. Strikingly, he says about 90 percent have left since the year 2000 — just after Chavez’s government came to power. He says the two reasons most cited for leaving are physical safety and the economic crisis.

And alarmingly, most of the people leaving are highly skilled or educated.

For quite a while, Venezuela was a destination for immigrants leaving Europe and elsewhere. Paez estimates that over 40 percent of the Venezuelans who have left were able to do so because of their dual citizenship — something they have because of ancestors who moved to the country in recent generations.

Luis says that, out of the 15 closest friends he's had over his lifetime, only three remain in the country.

"I've definitely felt lonely, on top of despair," he says. "It has to do with the fact that everybody has left."

Most of his friends are scattered in various European countries, Canada, Colombia, Argentina, Australia or Chile, he says.

Paez estimates that about 200,000 Venezuelan expats are living in Spain — part of the 700,000 living in Europe more broadly. Another 300,000, he says, are living in the US. The rest are spread around the world.

"Most of my friends are descendants of Spaniards, or Italian people or other parts of Europe," Luis explains. "So they have utilized their dual citizenship and have gone there." 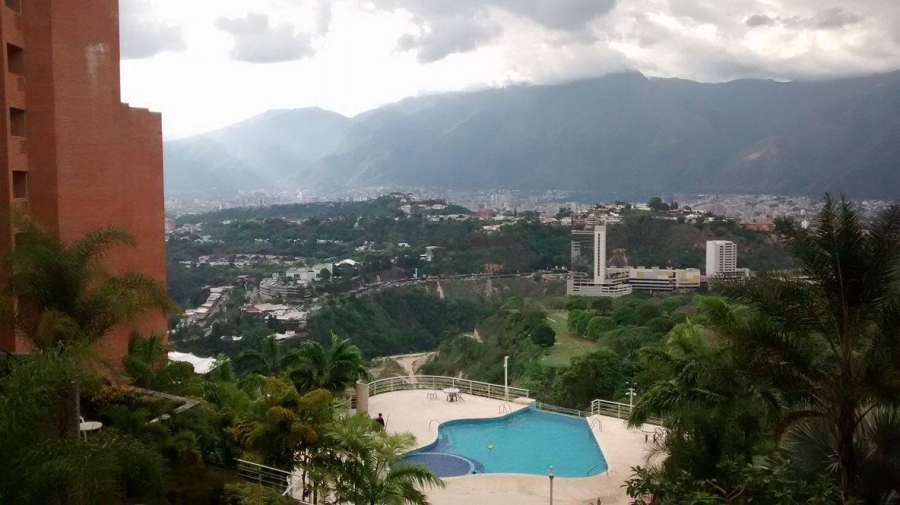 The view from one of Luis' friend's apartments in northern Venezuela. Luis says that he doesn't even recognize his country anymore, because the troubles are causing people to act differently on a day-to-day basis.

But, despite fear of violence and lack of real job opportunities, he refuses to immigrate illegally.

Instead, his plan is to apply for jobs in the US. He hopes he can find visa sponsorship. And if that doesn’t work, he’s looking to move to Canada, where he believes immigration laws are more favorable to his situation.

His desire to leave is hard on his family. During a recent car trip from his home to the center of Caracas, Luis’s mother told him that she didn’t recognize him anymore.

Luis was once a fervent Chavista, like his parents.

He says his views began to change when he learned English. Driven by a desire to watch British and American movies, he took classes for several years. He also started reading more foreign news.

Later, when he entered the university to study business administration, he met classmates who had views in opposition to the government. At first he held true to his beliefs, but after a while he began to change. After graduating, he worked for a handful of American and European firms, further exposing him to outside ideas.

As his friends, classmates and colleagues left, eventually, he wanted out, too.

If Luis is lucky, his mother — like millions of parents before her — will have to say goodbye in the coming months.

It’s difficult, but Paez says that the parents of emigrants he’s spoken to say: “I prefer to say goodbye to my son at the airport than at the cemetery.”

For reasons of privacy and security, the main subject of this piece has requested that his name be changed, and some identifying details — such as job titles and employers — remain undisclosed.