LaTanya Dickson's family has to travel 20 miles to get clean water, which they store in jugs under the kitchen table of their hogan on the Navajo Nation in northern Arizona. Now in one of its first projects in the US, an international NGO focused on water access is helping the family finally get indoor plumbing.

On the windswept Navajo Nation in northern Arizona, water often comes from unexpected places miles from people's homes. Outside the community of Bird Springs, for instance, that place is a big pipe that looks like a giant hook sticking out of the red dirt. It's where Sterling Begay comes to fill up big plastic barrels on the back of his truck.

But even this water isn’t clean enough for people to drink. 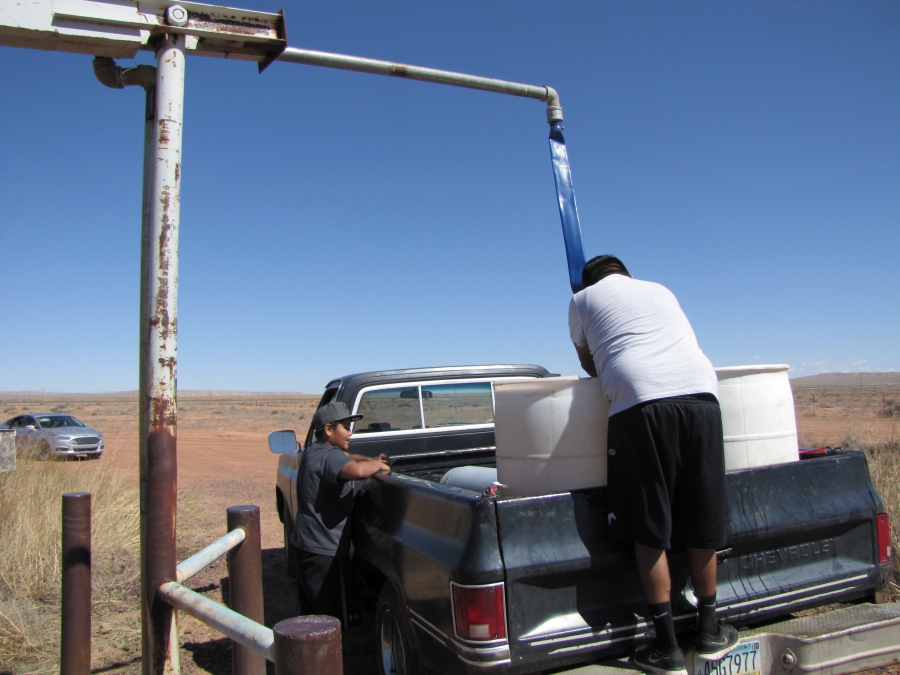 Sterling and Brennan Begay fill up water barrels for their livestock at a watering station in Bird Springs, Arizona. They have to travel even farther from their homes to get potable water for people. 40 percent of the residents of the Navajo Nation lack running water, in part because of uranium contamination from cold war mining.

“Livestock and plants” is all it's good for, Begay says.

To get clean drinking water, many residents have to drive even farther, because much of the water in Navajo Nation is contaminated.

From the 1940s to the 1980s, mining companies blasted nearly 4 million tons of uranium ore from Navajo land to make atomic weapons. Toward the end of the Cold War, the companies left, abandoning more than 500 mines. And over the decades, uranium from tailings piles leached into the groundwater near the mines, leaving 40 percent of Navajos in Arizona, Colorado, New Mexico and Utah without access to water.

LaTanya Dickson is among them.

She and her family have to lug refillable three gallon jugs into the nearest town, 20 miles from her home across the region’s remote high desert, and pay 35 cents a gallon to fill them up. It’s an expensive and time-consuming trek that leaves Dickson very frustrated.

“I think people should have clean water to their home no matter what,” she says.

Five hundred miles away in Los Angeles, George McGraw thinks so too. He’s the founder and executive director of the nonprofit DIGDEEP. 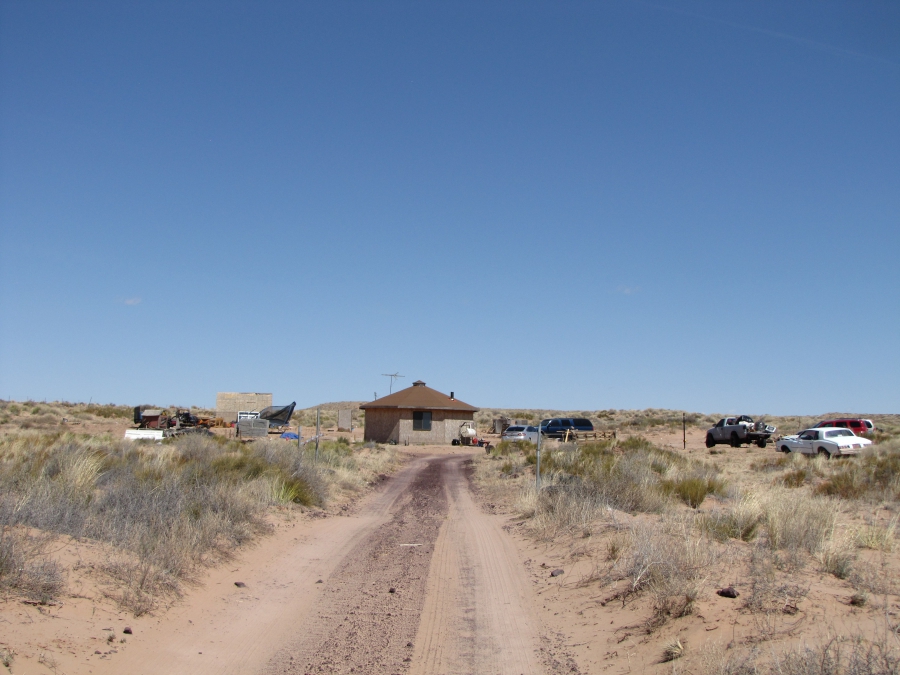 The Dickson family's hogan on the Navajo Nation has no running water. But DIGDEEP is raising money to connect the home to a water line 1,200 feet away.

“Water poverty really impacts every other part of your life,” McGraw says. “It’s a tremendous burden. It really impacts your ability to hold a job or get an education.”

DIGDEEP works with poor and isolated communities in places like South Sudan and Cameroon to build what it calls sustainable water projects. Until a couple years ago, though, the organization had only worked outside of the US.

That’s when someone called from New Mexico to make a donation.

“I said, ‘Great, I’d love to put that donation to use in South Sudan where people are really struggling without access to water,’” McGraw says.

“She said, ‘Actually I’d like you to spend it in New Mexico where I live.’”

McGraw did some research and was surprised to learn that 1.7 million people in his own country don’t have running water, and that 70,000 of them live on the Navajo Nation.

The average household in the United States uses roughly 100 gallons of water a day to drink, cook, clean and bathe, according to the EPA.

“I had looked up the data and knew that, yeah, there are millions of Americans living without clean water,” he says. But ”I didn’t assume that would somehow look like it does in Africa, or Southeast Asia or in Latin America, if someone doesn’t have access to water. But it’s remarkably similar,”

That call from the potential donor led McGraw and DIGDEEP to begin their first project in the U.S., on the Navajo Nation in New Mexico. Now they’re raising $50,000 to hire a local company to install a hookup to a water line 1,200 feet away from LaTanya Dickson’s home in northern Arizona, along with a bathroom, kitchen sink and septic system.

Dickson lives in a 24-by-24-foot hogan with her husband and four of her five kids. The other child, 18-month-old Lisa, lives in a medical group home in Phoenix, more than 200 miles away.

Watching phone videos the nurses send is the closest Dickson gets to Lisa for days at a time.

“We missed everything — her first laugh, her first Christmas,” Dickson says.

Baby Lisa was born with a rare digestive disorder. Dickson says her doctors told her that Lisa could have a small intestine transplant, but that she wouldn’t survive the procedure without running water to keep her clean at all times. 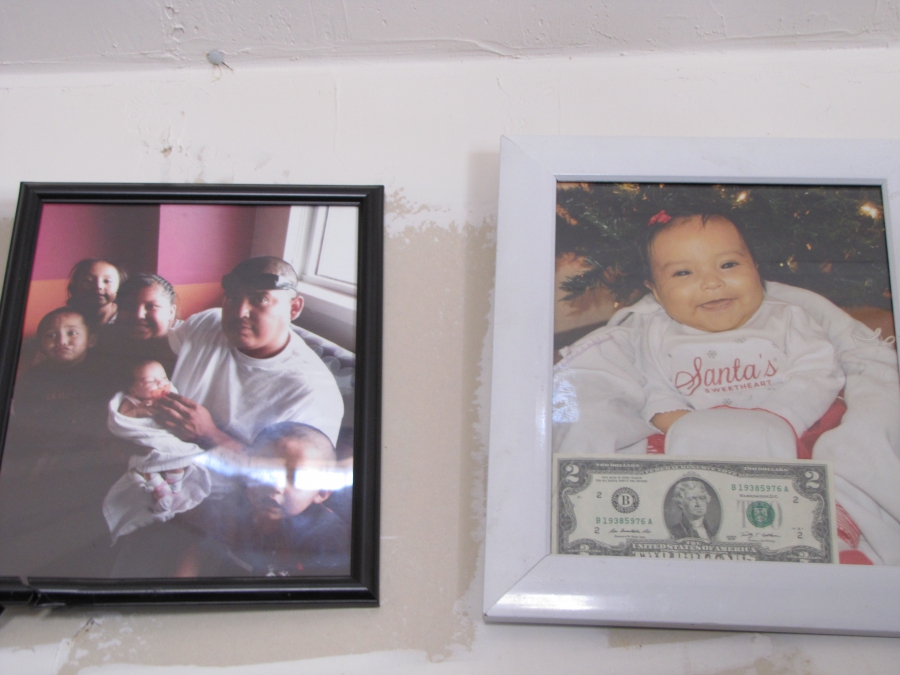 LaTanya Dickson's 18 month-old daughter Lisa has spent her entire life in a medical facility due to a condition that requires regular access to clean water. Dickson hopes the new water line DIGDEEP is helping bring to her family's home will finally allow Lisa to join her family.

“For them to tell you that your daughter has to stay here, she can’t go home because you don’t have the basic necessities to take care of her, that’s really heartbreaking,” Dickson says.

Soon after she went on the radio to talk about her situation, she heard from DIGDEEP with an offer of help.

McGraw says without DIGDEEP’s help it would take two to three years to begin the survey process for a water line and then an indefinite amount of time to actually construct it.

He says DIGDEEP will have it done in a fraction of that time, so Dickson’s family can bring Lisa home.

McGraw says Dickson’s story is not uncommon. About a million children in the U.S. don’t have safe running water at home.

“There is a concentration of those children in the Southwest on the Navajo Nation,” he says. “Baby Lisa helps us tell the story, but it’s not where the story ends.”

McGraw says DIGDEEP’s work with Dickson’s family is just the beginning of the organization’s story here in the US. DIGDEEP is working with another Navajo community to bring water and indoor plumbing to more than 200 families. And they hope to take what they’re learning in the Southwest to help inform their work in other communities both inside and outside the US.