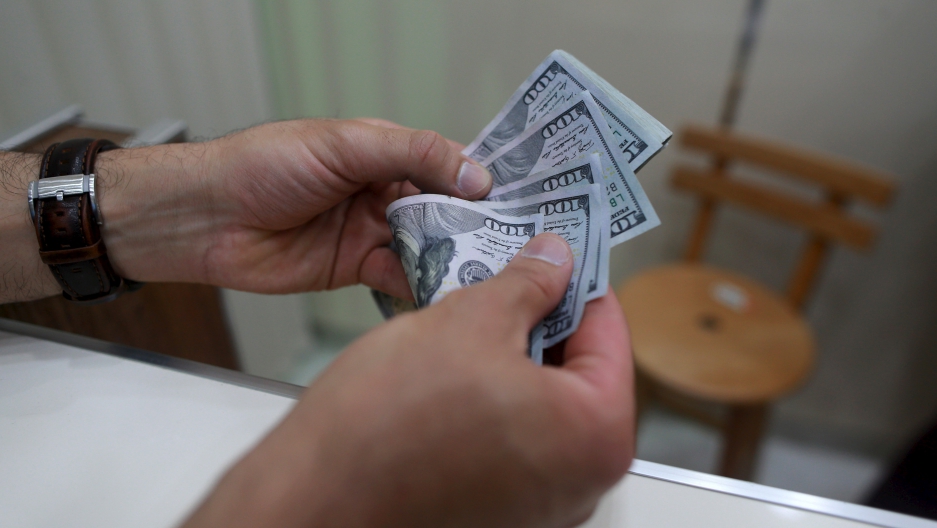 A man buys U.S. dollars in a currency exchange in Benghazi, Libya.

Banking in a failed state like Libya requires a leap of faith.

Some bank tellers there are thought to be collecting customers' information and colluding with the kidnappings so rampant now in the north African nation.

That's according to Tripoli businessman Alaeddin Muntasser, who spoke after the US and 20 other nations on Monday announced they were considering training and arming the Libyan government.

"Given the situation here with crime and kidnapping, a lot of the information that goes to kidnappers is from the banks — about who has what," Muntasser says. "We don't trust them in many ways."

Muntasser says he's noticed sometimes money goes missing from one of his accounts. That's one reason why he hasn't visited a Libyan bank to withdraw money in more than two years.

Another reason is that Libyan banks have so little liquidity. Muntasser says he sees long lines outside Tripoli savings institutions every day.

"It's actually a very sad sight. It's like people waiting for handouts, it's not like customers coming to withdraw money from their banks," he says. "The normal person who is waiting for his salary, or his social security or whatever, has to stand in line for days sometimes to get something as little as $10."

For the past five years, Libya has been a country in chaos. The revolution that toppled dictator Muammar Gaddafi in 2011 sparked a free-for-all civil war, as rival factions battled for control of the country. More recently, extremist groups including ISIS have moved in. Now a United Nations-backed unity government has been formed to try and bring some much-needed stability.

But it seems that stability won't be achieved without significant outside aid. Western powers are the most likely source of that assistance. The move by the US and other nations on Monday was a step in that direction.

Muntasser says the assistance is welcome, if care is taken to deliver it to the right people. He says corruption now in his country is worse that during the Gaddafi era.

"We've tried for five years now to do our own thing and we failed. Maybe this is the solution. I'm willing to accept it and try it," he says. "But the help from the West has to be something that's studied very carefully to make sure that if it's weapons or money, it goes to the right places."