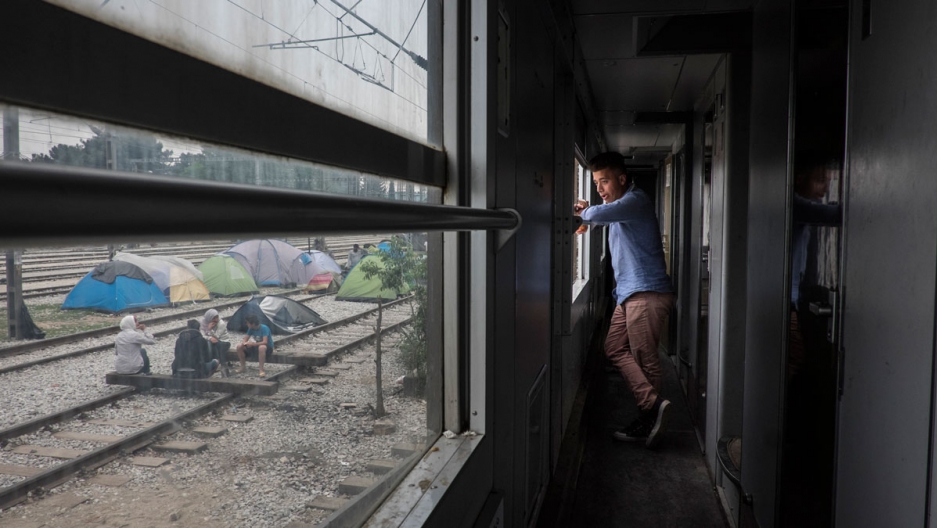 Moa'yad Al Saur, 20, from Damsacus, Syria, moved into a train parked at Idomeni station. He studied economics in Syria but fled because he didn't want to fight in the Syrian Army. His brother arrived in Germany already and his parents are still in Syria.

Inside the berth of a ruined sleeper car, a Syrian man keeps track of his days in the camp with chicken scratches on the wall — now 77.

Refugees huddle over their mobile phones ringing the Skype number they have been told to use to register for possible relocation elsewhere in Europe, but they never get an answer.

Two Afghan sisters pass fearful nights inside another train where they say men knock on the door at all hours. “We don’t feel safe,” they tell me.

Welcome to the sprawling refugee camp of Idomeni, where some 10,000 of the 54,000 refugees trapped in Greece are living. 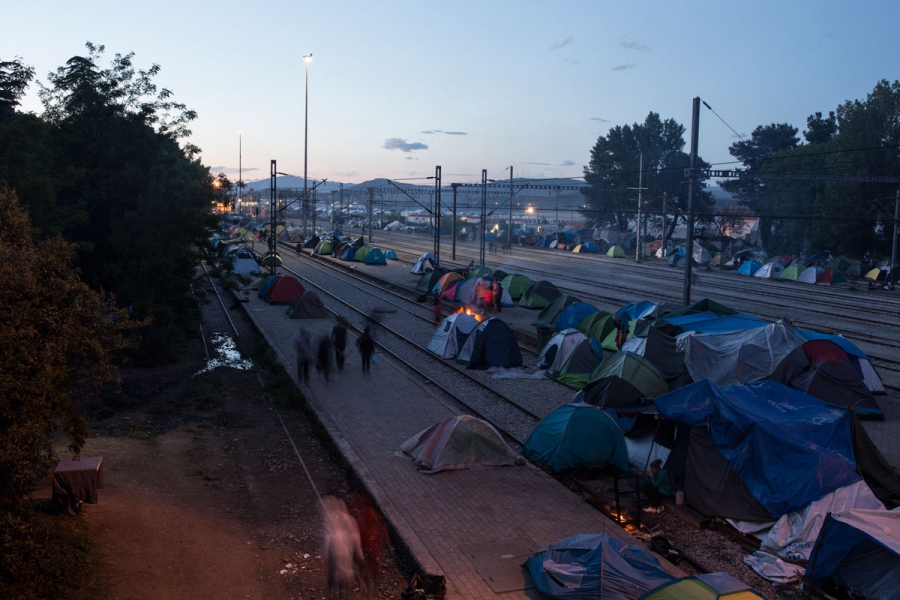 Hundreds of tents pitched along train lines on the Greek side of the Greek Macedonian border at Idomeni, an informal camp and home to about 10,000 refugees and asylum seekers who wish to continue their journeys to Western Europe.

Amid the squalor and uncertainty, along the Macedonian border, life also goes on.

Walking around the camp one night a Syrian mother proudly holds up an adorable baby — one of many born in the camp. “His name is Basel,” she says, “but we joke it should be ‘Idomeni.’”

A Syrian man who used to work in a pizza parlor in the Syrian city of Aleppo bakes bread over a small fire in a sleeper train to make a little money. And Kurds gather around a tent under the moonlight where a young boy sings a song calling for open borders accompanied by his father on the oud. A crowd gathers and claps along to the mournful music. 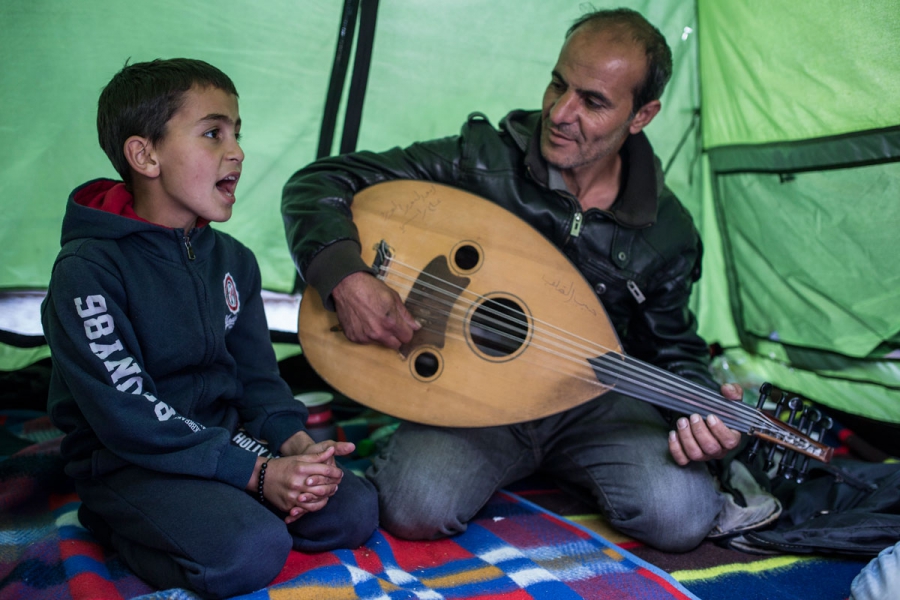 Omar Thaljey, 9, singing as his father Enwar plays the oud, at Idomeni camp.

But the overwhelming reality here is deep frustration. The refugees in Idomeni need safe harbor after violence forced them from their homes. But an agreement between the European Union and Turkey, which took effect on March 20, severely limits their possibilities. Most say that Europe is giving them the cold shoulder.

Their choices are grim. Those with money can pay a smuggler to pass them from Macedonia to Serbia to Hungry. If they’re lucky, they will eventually make it to Germany or another desirable country, and possibly be able to make a new life there. 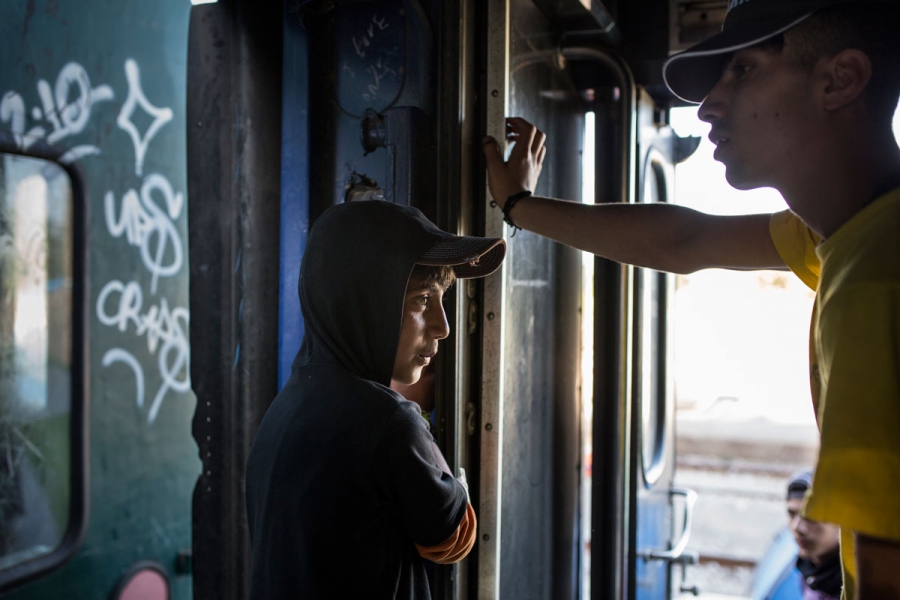 A boy and young man inside a train car parked at Idomeni station.

But many have exhausted their funds. Every night dozens try their luck on their own — families, sometimes with small children, cross the fence and enter Macedonia. Most are caught by the Macedonia military and sent back, sometimes bruised and beaten.

The Afghan sisters have tried to cross several times and are determined to try again. Why? They see no other better option.

The Greek government urges people at Idomeni, which is an informal camp not sanctioned by authorities, to voluntarily relocate to one of about 30 official camps set up around Greece. 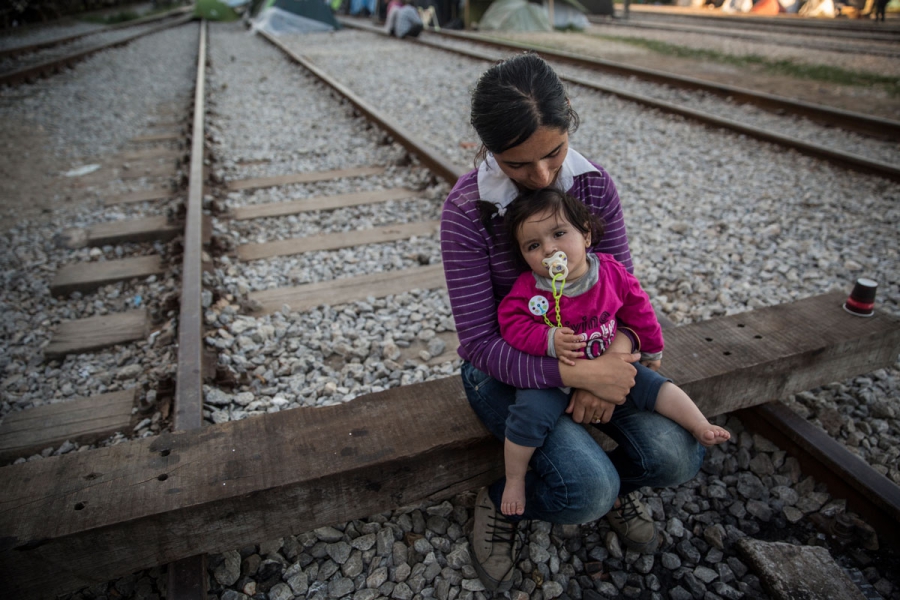 Suzdar Mustafa with her 9-month-old daughter Saya. A Syrian Kurd from Kobani, she fled to Turkey when ISIS forces were fighting to take the city in September, 2014. She gave birth to Saya while living in a refugee camp in Suruc in Turkey. Along with her husband, the family tried to immigrate to Western Europe but got stuck in Greece. They are living in a train car parked at Idomeni station.

Few want to go. After making the arduous journey to Greece, there's little appeal to staying in a remote camp with marginal facilities in a country which is itself in economic crisis.

Under the terms of the EU-Turkey deal, they can apply for asylum in Greece or relocation elsewhere in Europe — although they cannot choose a specific country. If they have family in Europe, they may be eligible for reunification with their family members. But not all groups qualify for these programs and could face return to Turkey, which is considered a safe third country under the agreement.

Given all these factors, and the fact that the Skype system hastily put in place by a beleaguered Greek government after the EU-Turkey deal to apply for these programs has been ineffective, many refugees are choosing to stay and take their chances in Idomeni.

Risking an illegal journey north, with or without smugglers, or staying in a squalid camp that is at least near the border, seems to offer better odds than relying on promises from the European Union that have yet to materialize. 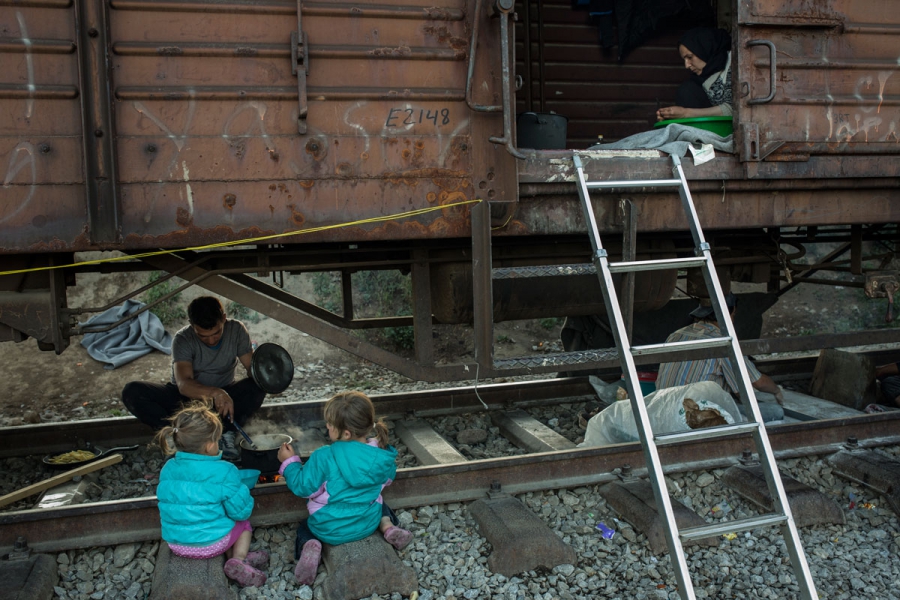 Twins Mimi, left and Lulu Betula, 3, from Aleppo, Syria, live with their parents in a box car parked at Idomeni. 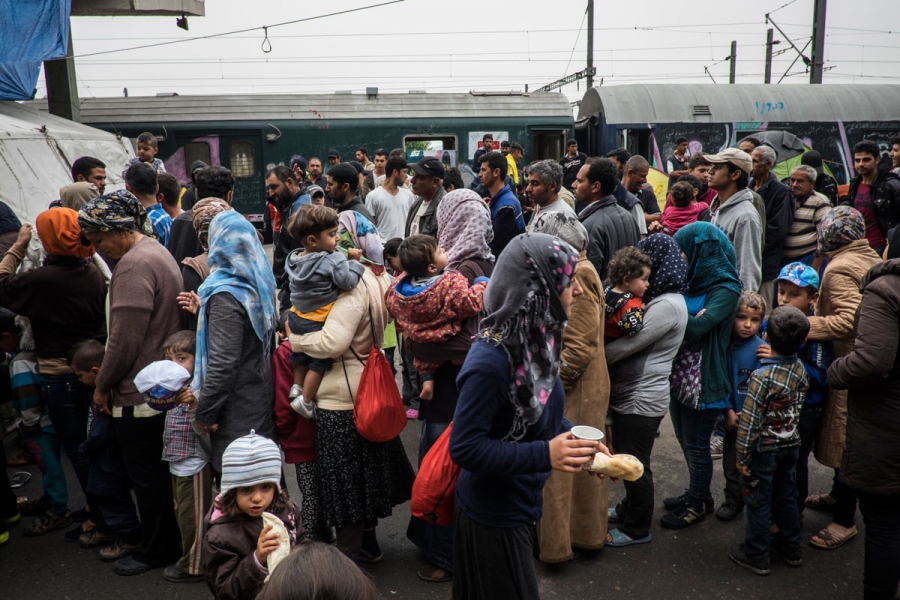 Food distribution at Idomeni station, where hundreds of refugees and immigrants are living aboard parked trains and in tents pitched along the tracks. 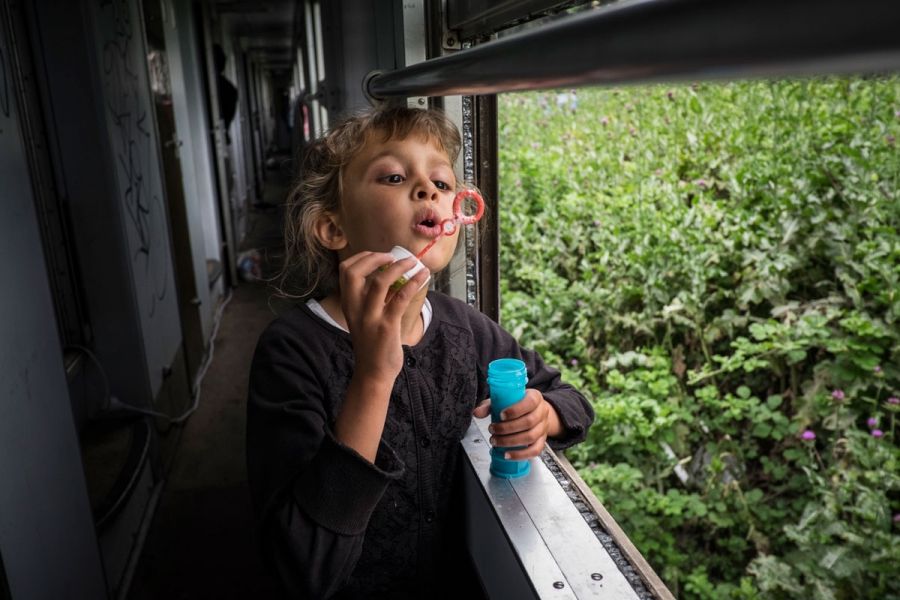 Miriam, 7, a Syrian girl, is living aboard a train parked at Idomeni station, along with her parents and brother.

Jeanne Carstensen and Jodi Hilton are covering the refugee crisis in Greece with support from the Pulitzer Center on Crisis Reporting.