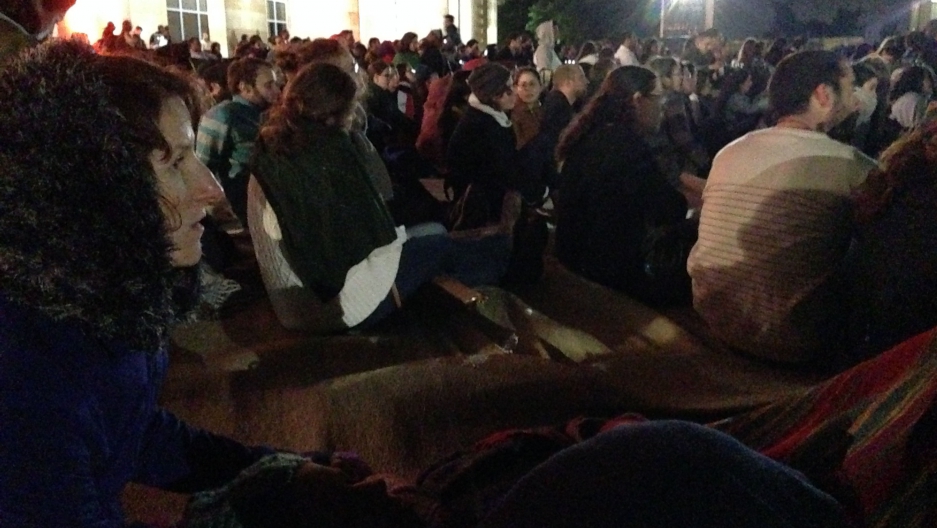 A Memorial Day gathering in front of the city hall in Jerusalem. People come together to sing songs of loss and remembrance.

Memorial Day in the US comes with its mix of traditions: flags lowered to half-staff and ceremonies for fallen soldiers, but also barbecues and Memorial Day sales.

Restaurants and bars closed Tuesday night for ceremonies to remember fallen soldiers and victims of bus bombings and other attacks.

In Jerusalem, the square in front of city hall filled with hundreds of Israelis, mostly in their 20s and 30s, sitting on plastic chairs or cross-legged on the ground, wrapped in blankets.

In the way back sat a New York transplant, who introduced herself as Esther and reflected on her life in Israel.

Her stepson was killed in a bus bombing about six years ago.

“He was with a friend, and the friend bent down to tie his shoes. And he sat. And so his friend survived and he didn’t. He was on his way to Oxford medical school. He was a brilliant boy,” Esther said.

Esther’s stepson had chosen to have his organs donated in the event of his death.

“In Israel, you cannot choose who the organs go to. So, this child’s organs went to a Palestinian girl,” Esther said.

She didn’t want to talk more about it. She was here to sing — alone, with a square full of strangers.

“That’s what Israelis do,” Esther said. “We share our grief.”

She hummed along to the first song played at the sing-along: the Friendship Song. It’s an oldie, written in 1948 to remember the young Israeli fighters who died in the war that led to Israel’s establishment.

It was performed without words during the sing-along, but here are some of the lyrics: “So many whom we once knew are gone;” “We will remember them all;” “Our love is sanctified in blood.” It’s a song of sacrifice for the greater good, written in a collective language.

Long before karaoke made it to Israel, there were public sing-alongs. The tradition stretches back to the early 20th century, with the first waves of Jewish immigrants. They’d work in the fields in the day and gather at night to learn new Hebrew songs, says Einat Sarouf, an Israeli musician who has helped revitalize the tradition.

For years, it was mostly older crowds that got together to sing mostly older songs. But in recent years, public sing-alongs have become popular with younger generations, especially on Memorial Day. Musicians and singers lead the crowd, with the lyrics projected on a screen.

They sing both oldies and newer songs, like this 1997 ballad, Fathers and Sons, by Israeli singer-songwriter Eviatar Banai. It’s also about loss and war, but the words reflect a completely different sentiment than the Friendship Song of 1948: not at all the collective embrace of heroic sacrifice, but an expression of personal anguish.

“Go away from here. Leave me alone to scream,” some of the lyrics go. It’s seems like an anti sing-along anthem. But this song, too, has a place at the sing-along.

Erela Ganan, 31, a Jerusalem native and master’s student in environmental and urban policy, sat cross-legged on the ground in the middle of the crowd. She comes to this public sing-along, organized by the Jerusalem municipality, every Memorial Day.

Two of her brother’s friends died as Israeli soldiers in Lebanon at the end of the 90s. She was 13 or 14 at the time, and she became a political activist, rallying for Israel to pull out of Lebanon.

“I strongly believed that would bring the end of wars. And everything would be fine after that, and everyone would love each other after that,” Ganan said. “I was an activist for the Labor party, and they won in the election in ’99. And then nothing changed. We left Lebanon. War continues, hate continues, violence continues. And still, I don’t know. What’s the end?”

Some Israelis boycott Memorial Day sing-alongs. Some, who are critical of Israel’s militarism, consider them rituals of sadness that glorify war.

Some attend an alternative Memorial Day ceremony in Tel Aviv together with Palestinians, a ceremony that marks both sides’ pain.

In this very same square, another public sing-along takes place. This time, with happy songs.