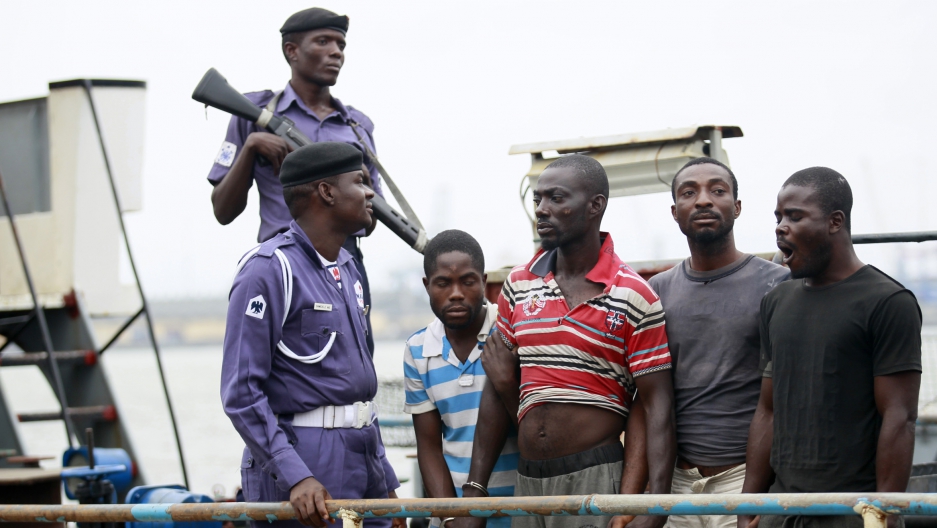 Suspected pirates are paraded aboard a ship at a Lagos naval base after their arrest by Nigerian authorities.

Plummeting oil prices have transformed the tactics of pirates in West Africa.

The old business model — commandeering a vessel, siphoning off the fuel and reselling it on the black market — isn't working anymore.

"There's not as much money to be made from selling stolen oil, and that's caused a shift towards a kidnapping-for-ransom model in the Gulf of Guinea," says Matt Walje, the project officer at Oceans Beyond Piracy and the lead author of that group's recently released report, The State of Maritime Piracy 2015.

Walje says pirates usally approach drifting or anchored vessels in high-speed skiffs and use a ladder or a rope with a grappling hook to climb aboard. Then they'll kidnap several individuals from a vessel and hold them inland for about three to four weeks.

"They generally target the higher-ranking officers under the assumption that you can get more," he says.

Then they call on the shipping companies to pay a ransom for the seafarers. And usually, Walje says, the sailors' employers agree to hand over cash for the safe return of their West African employees.

Little is known about exactly how the ransoms are paid.

"It's intentionally kept shrouded to avoid encouraging increasingly high ransoms and dragging out the ransom negotiations," he says. "They're taking these crew members up into the riverine, in the Niger Delta and and holding them on little islands, kind of in swampy [river] areas while they negotiate."

Walje says often, after the pirates and the shipping companies reach a settlement, the pirates will tack on additional demands like cell phones or other electronics.

"Once they finally reach an agreement, they will take a security team and a ransom drop team," he adds. "They'll go to an agreed point and hand off the cash and then receive the seafarers back safely, hopefully anyway."

Few pirates have been apprehended and prosecuted in recent years. And as long as they continue to operate with impunity, the crew on vessels that ply the main shipping routes in West Africa will continue to pay the price.