Earth does not always spin on an axis running through its poles. Instead, it wobbles irregularly over time, drifting toward North America throughout most of the 20th Century (green arrow). That direction has changed drastically due to changes in water mass on Earth.
Credit:

As the ice melts and runs off into the oceans, the weight of all that mass shifts, causing the Earth to wobble slightly on its axis, explains NASA’s Erik Ivins, co-author of a new study that documents the change in the Earth’s rotation.

It’s a fascinating phenomenon, Ivins says, but has no major effects for humans.

Ivins says the Earth’s spin axis has been wandering for at least the last five million years, ever since ice sheets began to build up in northern Canada and Scandinavia, When these ice sheets disappeared, they left behind a kind of depression in the Earth. “That's a mass deficit, with respect to the average Earth,” Ivins explains, “and it causes the pole to want to wander in the direction of that hole that's left there.” 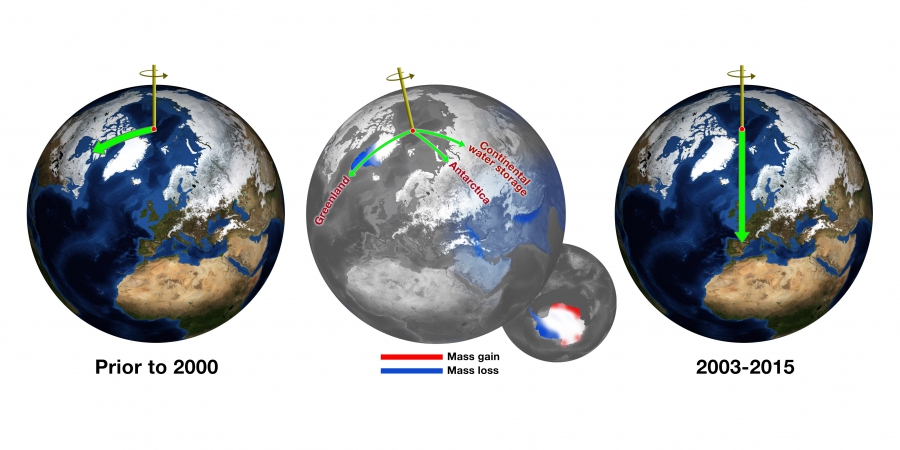 Before about 2000, Earth's spin axis was drifting toward Canada (green arrow, left globe). JPL scientists calculated the effect of changes in water mass in different regions (center globe) in pulling the direction of drift eastward and speeding the rate (right globe).

Scientists have been recording the drift in that direction since about 1899 or so. But between 1999 and 2001, they started to see the Earth’s axis move in a new direction. That new direction can only be explained by the lost ice mass of Greenland, Ivins says.

The idea of the Earth’s axis wandering around may sound a bit unsettling, but Ivins explains it this way: “Let's say that you have a toy top and you spin it,” he says. “Since it's very symmetrical, it will tend to nicely form just a single axis of rotation. But if you were to take a tiny piece of chewing gum and stick it on there, you would find out that the spin axis would slightly tip over. That's because the body is no longer symmetric. It has an off axis piece of mass on it, which is causing the moments of inertia to change.”

The new wobbling was first noticed by Jianli Chen, a researcher at the University of Texas at Austin. Chen is an expert in hydrology and part of NASA’s GRACE (Gravity Recovery and Climate Experiment) team. Ivins’ study used Chen’s data to bolster their results. “He was the first person that published a really nice paper explaining what the new drift direction was and that the Greenland ice loss was dominating this new direction,” Ivins says.

The movement of the Earth’s axis has no practical effects on humans, because it is so small. “We suspect these changes are occurring at a meter [or] a meter-and-a-half, at the most, per year,” Ivins says. But tracking the shifts in the Earth's axis is crucial for other reasons, including GPS positioning and proper functioning of orbiting satellites.

Moreover, while these changes don’t “have a feedback that is necessarily important to life on Earth,” they are kind of a wake-up call for civilization — that anthropogenic, human-related climate disruption can cause such a profound change.

“One of the things Jianli Chen mentioned was it's just another strange thing that the climate does,” Ivins says. “It is just one of those things you can put on that list of, ‘Oh my God! Climate change really does that?’ Well, yeah, this is one of those.”