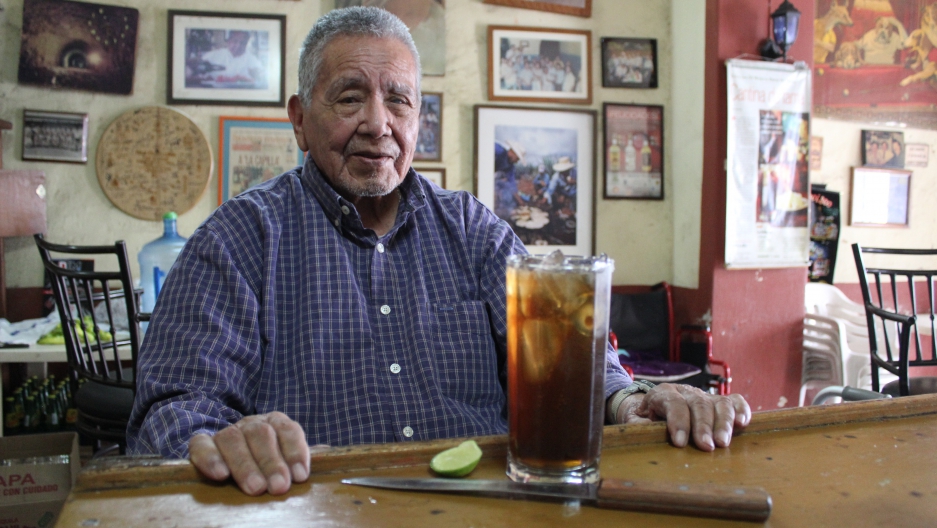 Ninety-something Javier Delgado Corona and his signature batanga cocktail in the town of Tequila, Mexico, about an hour outside Guadalajara.

It’s Friday, so maybe you’ll head out for a drink tonight and check into your favorite bar, see your favorite bartender. For some in the town of Tequila, Mexico, that means stopping by a beloved watering hole and saying hi to one of the oldest bar owners in the country.

Tequila is located about an hour outside Guadalajara, in the state of Jalisco. Stores line cobblestone streets selling the namesake spirit. It’s pretty touristy (you can ride a vehicle shaped like an oak barrel and drink away).

Welcome to Tequila, the town considered the birthplace of the liquor, located in the Mexican state of Jalisco.

But one person who has seen the town boom, yet has kept to his own traditions, is Javier Delgado Corona, known as Don Javier.

He is 93, more or less, he says, and for decades he has run a small bar known as La Capilla (The Chapel). But if you go there, don’t look for a sign outside. He doesn't like that name, it’s just the one that stuck. Don Javier is a devout Catholic and says, “A chapel is where you go to praise God, not to drink."

Inside, the bar is simple. Adobe walls keep it cool, and there are white plastic chairs and tables and photos of friends. When we walk in, he says, "I hope you’re not disappointed. It’s not so pretty." He’s modest. The place has plenty of character, much of it because of Don Javier. Others agree. A British magazine has ranked La Capilla as one of the world’s 50 best bars. 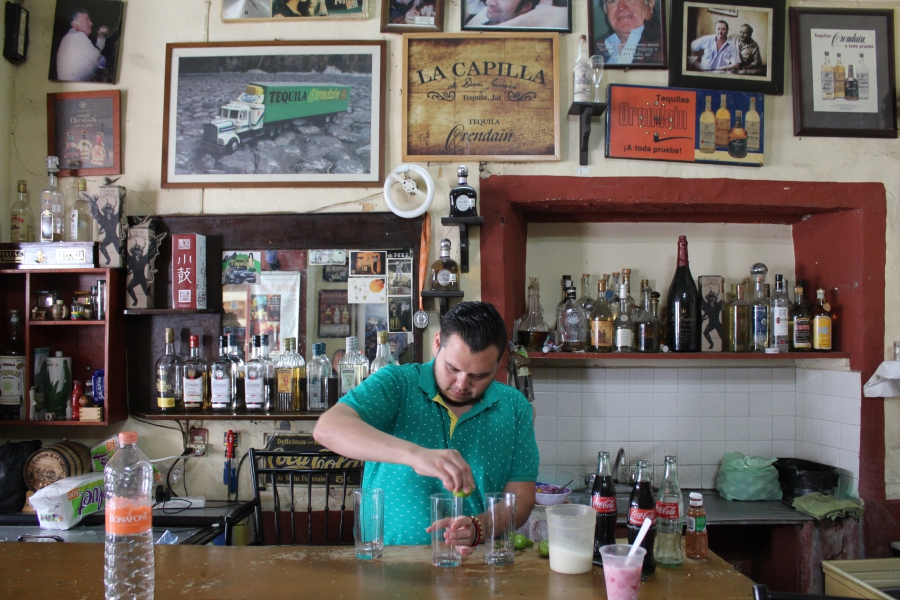 Most patrons at La Capilla ask for the batanga, a simple cocktail created in the 1950s that mixes cola, tequila, lime, salt and ice.

As we talk, his nephew hands him his preferred drink: tequila with Coca-Cola at room temperature. But what most people order here is the bar's signature drink — the batanga. Don Javier started making it in the 1950s (maybe the early ‘60s, he is not completely sure). The drink is nothing fancy, just something refreshing on a hot day.

To make it, you need a tall glass, he says. Then, coat the rim with lime and large salt crystals. Add ice and juice from half a lime. Next, he adds Coca-Cola, and plenty of tequila. Don Javier prefers blanco, unaged tequila. Then, stir — a crucial step. He mixes the drink with a big, old, wooden-handled knife.

“It gives it flavor,” he says. The knife is seasoned, after years of using it to cut limes, chilies, avocados.

Don’t expect to see a sign for La Capilla outside. Owner Javier Delgado Corona doesn't like that name. It’s just the one that stuck.  “A chapel is where you go to praise God, not to drink,” he says.

He also talks about how the town of Tequila has changed. "It was much smaller once," he says. Everyone knew everyone. Now, it’s bustling, with mansions in the hills, many owned by tequila bosses.

He’s also seen how technology has changed cantina life. “Couples come in and stare at their phones,” he says. “It’s so strange to me. They’re not talking to each other!” As he sips his drink, a small band walks in. I ask Don Javier to request a favorite song and he picks a classic: “Cuando Salgo a Los Campos" (When I Go to the Fields).

The third volume of a guest book for people who have visited La Capilla, one of the oldest bars in Tequila, Mexico.

As the band plays, his eyes well up. He misses his regulars, his friends. Most are dead. But he appreciates the tourists that come though, and vows he’ll always stick to his philosophy of what makes the perfect bar. It's easy, he says: “Smile when someone walks in. Greet them. Ask them where they want to sit, and get them a cool drink in a clean glass.”

And he adds that his customers are not friends. “We are more than friends,” he says. “We are brothers in this world.”

Make a Batanga!
1. Use a tall, chilled glass
2. Coat the rim of the glass with a lime wedge and salt (large crystals are best)
3. Add plenty of ice
4. Squeeze in juice from half a lime
5. Add a shot of blanco (unaged) tequila (about 1.5 ounces)
6. Fill the rest of the glass with Coca-Cola
7. Stir with a big steak knife (even better if you just used it to cut the lime and maybe some avocados and tomatoes for that fresh salsa you just whipped up)