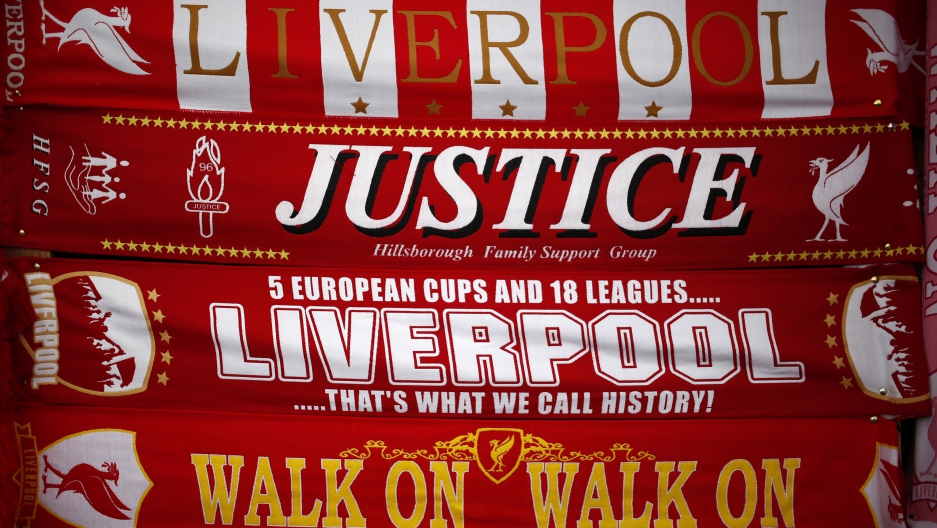 Liverpool scarves, including one asking for justice for the victims of the Hillsborough disaster, are seen for sale on a stall outside Anfield Stadium in Liverpool, England.

A tragedy happened 27 years ago that changed soccer forever. And it’s taken all this time to get some clarity as to why it happened.

On April 15, 1989, soccer fans gathered for an important game in Sheffield, England. It was a Football Association Cup semi-final match between two storied visiting teams: Liverpool and Nottingham Forest. The venue was the Hillsborough Stadium in Sheffield.

Kickoff was at 3 p.m. By 3:06, a police officer had rushed onto the field and asked the referee to stop the match. The tragedy had been consumed. Nearly 100 fans were dead, and hundreds of others were injured.

It all happened on the side of the stadium reserved for some 10,000 traveling Liverpool fans. In the end, all of the 96 people who died were Liverpool fans. The youngest was 10 years old, the oldest 67. The cause was a surge of thousands of spectators into a standing-only area of the stadium that was too small to accommodate everyone. People were literally crushed to death.

At first, the police blamed the fans for the tragedy. They suggested many fans had been drunk and unruly, and had surged uncontrollably into the stands. Case closed. But the families never accepted that explanation. And they have battled for 27 years to get some justice for their loved one. Justice for The 96.

Years ago, they succeeded in getting the investigation re-opened, after evidence of a police cover-up emerged. The police in charge of crowd control that day had altered their reports to eliminate any suggestion that they had been responsible for what happened.

Today, a jury announced a verdict that confirmed what the families always knew. Their loved ones were not at fault. The police were.

According to the jury, the deaths were "unlawful killings" that took place because police commanders at the scene failed on many levels. They failed to plan for the number of fans who showed up for the game. They failed to have enough entry points to avoid creating a deadly funnel effect. And they made a huge mistake when thousands of Liverpool fans were still stuck outside just minutes before kickoff: they flung open the gates and let the fans rush down a single corridor, and into an already dangerously overcrowded part of the stadium.

The result was a tragedy that is still an open wound in Liverpool and Sheffield today. But now, 27 years later, the families have at least a small measure of justice.

British Prime Minister David Cameron tweeted that today was a “landmark day” and that the verdict “provides a long overdue justice for the 96 Liverpool fans who died in the tragic disaster.”

Soccer fans like me are familiar with the anthem all Liverpool fans know by heart. It’s called “You’ll Never Walk Alone.” It’s belted out with passion by tens of thousands of spectators, singing in unison, before the start of every Liverpool home game.

Well, today the families of the 96 showed just what this verdict means to them, by singing “You’ll Never Walk Alone” outside the courtroom. You’ll never hear a more poignant rendition of that anthem, I guarantee it.

The verdict today could pave the way for actual prosecutions, of either individuals or entities involved with crowd control back on that sad April day in 1989.

But things have changed drastically for sports fans since then. As a result of the the Hillsborough disaster, both in England and around the globe. Gone is the tradition of standing-only areas for fans. And authorities all over the globe now require every major soccer venue to have an effective crowd-control plan in place.

I don’t take that for granted, even now. I still remember hearing about Hillsborough back in 1989 and thinking, “that could have easily been me.”

Not because I lived in England and went to soccer matches there. But because as a kid I had been to other soccer games in the 1980’s, in Italy, where conditions for spectators were dangerous. And from those experiences, I knew what it was like to be lifted off your feet by a surging crowd at a sporting event. And I could almost imagine, maybe, how 96 soccer fans could be carried to their deaths that way.

Just thinking about it now still gives me chills.

When not editing PRI's The World, William Troop is often watching, playing or writing about soccer. You can follow him on Twitter at @worldsoccerguy.