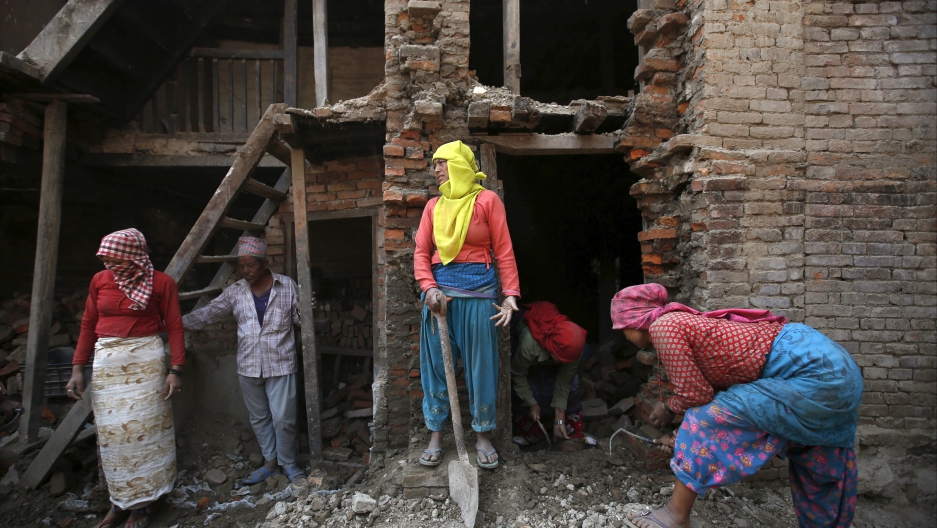 Family members work to rebuild their house a year after the 2015 earthquakes in Bhaktapur, Nepal, April 25, 2016.
Credit:

The Himalayan country of Nepal was rocked by a devastating earthquake that killed almost 9,000 people one year ago. Today, the country still suffers from widespread homelessness, power outages and a serious lack of basic supplies.

Anup Kaphle, who is deputy foreign editor for BuzzFeed News, has been to Nepal three times since the earthquake — twice as a journalist, and once to get married. Kaphle was born in Nepal, and he says his wedding festivities last November contrasted with the poverty he witnessed. He wrote about his experience in a recent BuzzFeed story.

In the past year, Nepal has made very little progress rebuilding, according to Kaphle. “Many of the homes that were razed to the ground in the villages look the same,” he explains. “People are still living under tarpaulins that are tied by tree branches.”

“They were sleeping on the floor on these very thin mats that have been donated, all winter and all of monsoon,” Kaphle went on. “It was disheartening to see that the government hadn’t taken any steps to help these people.”

At first, the global response to the earthquake looked like a cause for optimism. More than $4 billion was pledged by international donors. But an official told Kaphle that none of that money has actually arrived in Nepal.

“According to him, for any of the money to come into Nepal, the country needs to show it has a detailed plan. And it does not have a detailed plan on how it’s going to rebuild,” Kaphle says. Many residents of rural Nepal have lost hope that their government will ever provide relief.

The absence of government relief has led young volunteers and NGOs to step in. “They’ve sort of taken it on themselves to help rebuild schools, rebuild hospitals, in very remote places,” Kaphle says. But with some roads still blocked by landslides, and many bridges unusable, outside help isn’t reliable.

This makes the coming months a crucial period for Nepal — especially, says Kaphle, because the rainy monsoon season is approaching. This could be a chance for the Himalayan nation to get relief to its most vulnerable citizens. If they don’t, the consequences will be dire.

“If people are going to continue to live in these temporary shelters, come monsoon — which is soon — and then another winter, I feel like a lot of them are in danger of losing their lives,” says Kaphle.