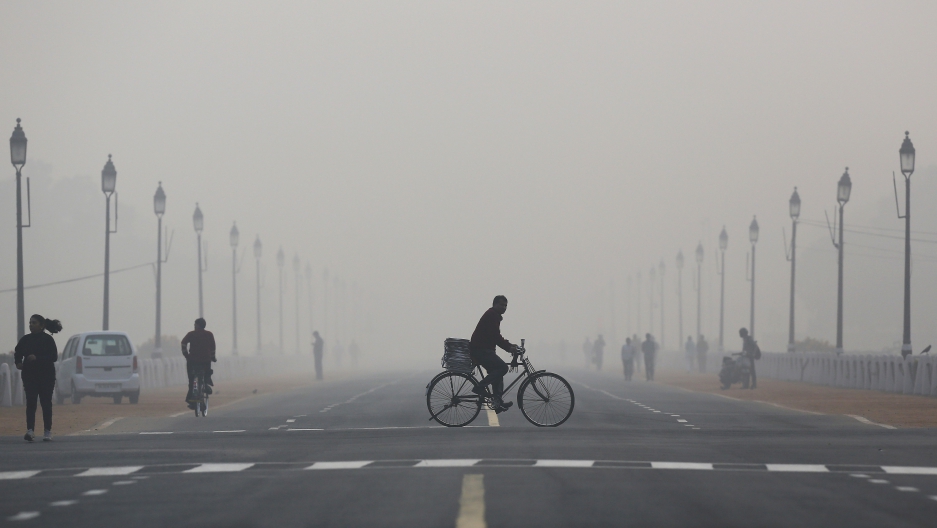 A newspaper vendor rides his bicycle on a smoggy morning in New Delhi, India in December.

I moved to New Delhi in the fall of 2013 and my body reacted almost immediately to the city’s air quality, which is among the worst in the world.

I developed a perpetually a stuffy nose. When I first blew my nose into a tissue, I realized with horror that my boogers had turned black, a fact I came to accept and even forget over time. But it wasn’t easy to forget just how polluted the city’s air really is.

I was reminded of it every time I set foot outside.

The haze was so thick that time of year, that people drove with their fog lights on till mid-morning when the sun eventually burned through the haze. Flight delays were and still are common during the winter. The air smelled of smoke from brick kilns, the homes of poor people using woodstoves, the homeless burning garbage to stay warm, and the widespread field burning that farmers in the neighboring agricultural states of Punjab and Haryana do every autumn.

Then there is the burning of fireworks during the autumn festival of Diwali, which envelopes Delhi in a pall of sulfurous smoke for a couple of weeks. Breathing outside felt like a health hazard.

The reasons for Delhi’s poor air are many. Firstly, it is geographically at a disadvantage. It is a dry and dusty part of the country. It is landlocked and sits in a bowl, much like Los Angeles. And the city’s growing middle class adds about 1,200 new cars every day, many of them running on diesel, which pollutes more than gas.

The city’s construction industry is booming. Old buildings are being torn down and new ones are being built, filling the air with construction dust. Add to this mix the the surrounding agricultural areas and the annual field burns, and you have air filled with harmful pollutants.

Things do look up a little bit during the monsoons, when the rains wash away the pollutants and you can catch glimpses of a blue sky dotted with big, puffy, clouds. But for the rest of the year, the air is always thick and hazy, getting worse in the autumn and winter. (Check the Delhi weather on your computer or your smartphone and you’re likely to see the word “Smoke” on your screen. My husband always jokes that in the United States, “smoke” is a natural hazard, not a weather condition.)

For some objective perspective, here are some numbers. Today, the Delhi Pollution Control Committee’s monitors have recorded PM2.5 (particulate matter smaller than 2.5 micrometers) levels of 247.04 micrograms per cubic meter in one neighborhood in the city. That is a little more than four times the Indian standard of 60 micrograms. Those levels have been known to rise to eight or 10 times the safe level in the winter.

The government has been trying to tackle the issue, mostly by trying to change how people commute. It has done a remarkable job with expanding its metro rail system, but the metro is still far from meeting the transportation demands of the city. (You can read more about the Delhi metro system in this piece.)

The government is also experimenting with an “odd-even" plan, which allows cars with odd-numbered license plates one day, followed by cars with even-numbered license plates the next. The first phase of this two-week experiment was in January. While many grumbled about the inconvenience caused to them, most eventually embraced the program and adopted public transport or began to carpool, a new phenomenon in the city.

And scientists monitoring air quality recorded a 10 percent reduction in particulate matter in the following weeks.

Earlier this month, the government launched the second phase of the experiment, this time to louder grumbles and fewer people complying. And yet, the Delhi government is considering making the odd-even scheme permanent. Like everyone else who supports this and other measures to limit the number of cars on the city’s streets, I hope this can make a dent in the level of air pollutants.

But more than that, I hope this can increase people’s awareness of how their own choices affect the city’s air quality, something that I found missing not just in Delhi, but elsewhere in India.

After all, polluted air isn’t just an inconvenience, it has serious health consequences. An estimated 600,000 Indians die prematurely. Doctors blame these deaths on the worsening air quality in most Indian cities. According to one study, nearly half of Delhi’s 44 million children have reduced lung capacity.

Over the nearly three years I spent in the city, I had more frequent respiratory infections, almost once every couple of months, as did many of my friends. Last year, I suffered from a skin allergy, which the doctor blamed on the heat and air pollution.

Running was my only mode of exercise in New Delhi, but over time my running became labored. I didn’t enjoy running as much anymore. In fact, I came to dread stepping outside at all.

But not stepping out is not an option for most residents, especially the millions of poor people in the city. Without the protection of air conditioned vehicles and access to good health care, they and their children probably pay the highest price for the city’s air quality.

I’m among the privileged minority with the option to leave and I did; not for the air pollution, but to join my husband, who lives in New York City. Now, I want to step outside all the time. It helps that it is spring. The sun is out and there are spring blossoms everywhere. But more than anything, I want to be outside to walk and breathe the crisp, cool, fresh air of the city.

I know New York residents would laugh at me. To them, the city’s air is polluted. But most of them don't understand what a privilege it is to be able to walk or even run outside, breathing the air, without consequences.

To me, New York’s air feels as clear as water from a mountain stream. I feel as if I have my lungs back. And my legs are learning to run again, moving swiftly and comfortably, despite being sore from travel and lack of exercise.