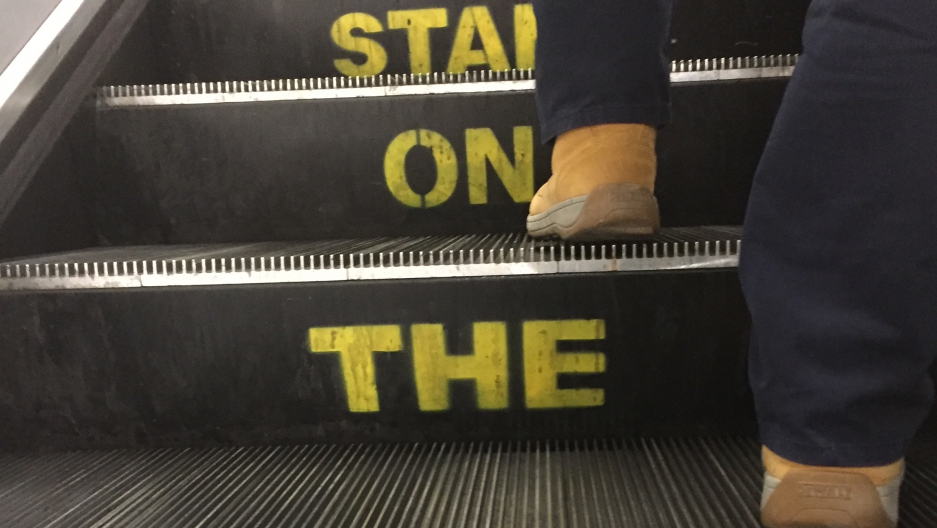 The words, "Stand on the right," painted into an escalator in London.

There are unwritten rules to get by in the city. Any city.

In Boston, you have to step out into traffic before it will stop for you in a crosswalk. If you don't you'll never get across.

But there are certain rules, or instructions, that are written. For London subway riders, this rule is escalator etiquette on the Tube.

A local explained it to me this way: "It's hell, but we do it in a civilized way."

Call it "Tube Etiquette." The most important part is the escalator: You stand on the right and walk on the left. Should you veer from this ... you'll feel the cold wrath of London.

But no one seems to know where the practice came from:

“I have no idea,” says the Underground’s Peter McNaught. “I'm from Scotland. And I remember when I first moved down to London and I accidentally made the mistake of standing on the left. And you soon learn from commuters coming behind you that you're doing something wrong. And you just all learn to do that, that's the unspoken rule if you like.”

McNaught is now in charge of several main Tube lines for the London Underground. It's an important gig. Up to 4 million people use the system each day. And it's one particular stop where he noticed a problem: Holborn Station. During morning rush hour, it turns into an underground traffic jam. And it's all due to three long escalators carrying people up to the surface.

“What you find is that the majority of customers do not want to walk up a very long escalator,” he says. “And they tend to congregate at the bottom to wait to stand on the right hand side.”

A line forms. Then a group. Then a wall of people backing up all the way to the platform. It’s a problem.

But a study at Greenwich University showed there is a possible solution: The congestion would ease if everyone stood on both sides of the escalator. But no one wants to stand on both sides.

Or so they say.

The London Underground did a trial run last year. It lasted just three weeks. But it got good results. It showed that standing on both sides moved 30 percent more people per hour. Rather than expand the system by, say, adding more escalators, it simply made the system more efficient.

Again, this only works for particular stations like Holborn, ones with very long escalators and a high number of people trying to use them.

London Underground made the decision to expand the trial based on its success. This time they're going to try it for six months, and of the three escalators going up, two will be standing only and one will be for walkers.

McNaught made a prediction on how it would go the first day.

”I think the first peak it'll be people getting used to it. It'll be quite difficult, initially. And I think by the end of the week we'll be cooking on gas." 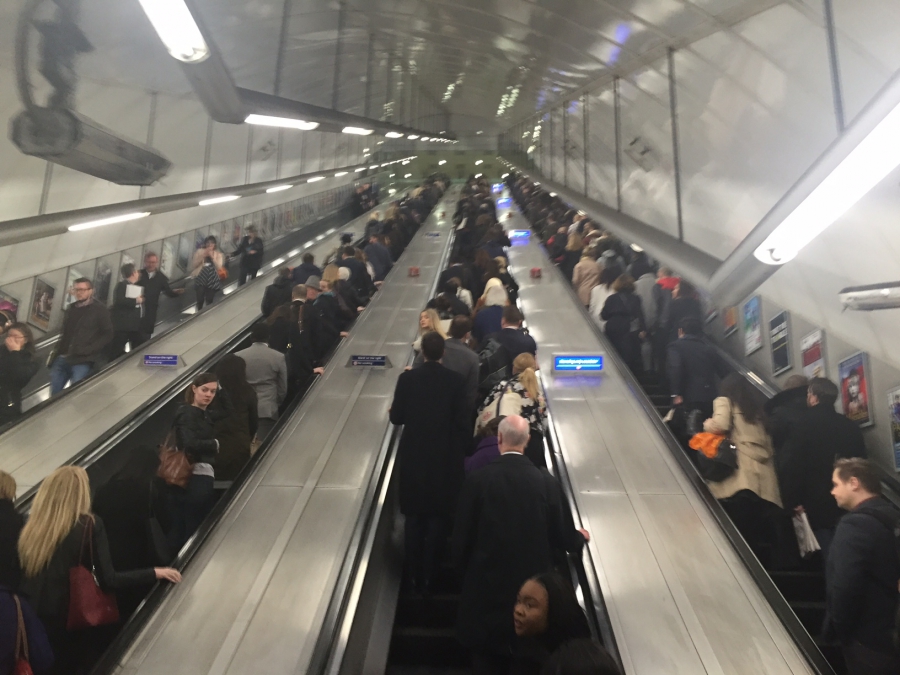 On the morning of the second trial, a Tube attendant stood at the bottom of the escalators.

“Good morning ladies and gentlemen,” he says. “We're asking you to stand on both sides of the escalator please.”

The people he addresses walk like cattle, slowly plodding toward the escalators. I’m with the group and step onto the right side of the escalator and look down. There are four footprints painted onto each step, a marker to remind both sides to stay put.

We do. But I notice a woman standing on the left side looking uncomfortable.

“Is this weird to stand on both sides?" I ask.

“It's really weird,” she says. “It's not natural. It goes against the laws of London.”

“Do you feel awkward being on the left side and standing?”

“I feel so wrong here! It feels really weird.”

At the top of the escalator — you can see the early results. The lines to the stand-only escalators moved people consistently and calmly.

But the other escalator did not.

It was supposed to be a walk-only escalator. But people reverted to the old ways. Stand on the right. Walk on the left.

And just like it always does at Holborn, a static line formed at the bottom.