A shaman stands at the Boiling River.

Andrés Ruzo first heard about the Boiling River from his Peruvian grandfather, who shared a legend with him when he was a kid about the Lost City of Gold in Peru. “One of the details of the story was a ‘river that boils,’” Ruzo recalls.

Twelve years later, when Ruzo was studying at Southern Methodist University in Texas to become a geophysicist, he asked colleagues and other experts if they knew anything about a large river that boiled in the Peruvian Amazon. No one had; some scoffed at the inquiry. While thermal rivers do occur, they’re generally tied to active volcanic or magmatic systems — neither of which were known to exist in the Amazon jungle, they said.

Ruzo gave up on the idea that the river was real. But then he happened to mention his frustration at a family dinner, when his aunt interrupted and said, “‘No, Andrés, I’ve been there,’” Ruzo recalls. “I didn’t believe her initially.”

But his aunt insisted. The river supposedly had healing powers, and shamans would make medicines from its scalding waters. But only those with the shaman’s permission could access the river.

Ruzo’s aunt tried to connect him with the shaman of a healing center she knew. When they didn’t return his correspondence, she offered to personally take him, so they traveled to Peru in November 2011.

After they reached the healing center in the shamanic town of Mayantuyacu, the duo received permission to visit the river. Guided by the shaman’s apprentice, they embarked into the jungle, eventually arriving at their destination.

“The place itself is stunning,” Ruzo says. “Imagine a clear river, clear water that’s almost turquoise, bounded by these ivory-colored stones on either side. And along most of the river, you’ve got these 60-foot walls of green that are just shooting up from the jungle floor, with these huge beautiful trees.”

Most noticeable, though, was the steam rising from the river. Ruzo immediately took the temperature of the water. It averaged 86 degrees Celsius, or around 187 degrees Fahrenheit — not quite boiling, but still really hot. 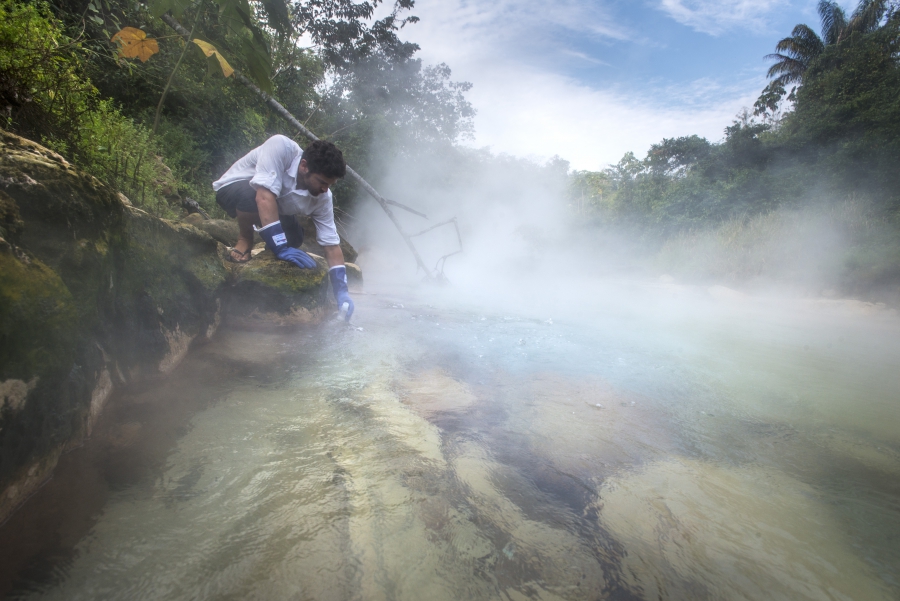 Ruzo had three hypotheses that could potentially explain the hot water: The river was part of a volcanic or magmatic system; it was a non-volcanic hydrothermal system, in which water seeps into the Earth, heats up and then rises back up; or it was a result of oil or gas activity gone awry.

After that initial trip, Ruzo knew he had to launch a deeper investigation. He returned eight months later with permission from the shaman, becoming the first geoscientist to study the river. He wrote about his experiences studying the river in a new book.

Over the course of several research trips, Ruzo narrowed down his hypotheses. He ruled out the first idea — geochemical testing of the water indicated it wasn’t volcanic or magmatic.

The third hypothesis — an oil drilling accident — worried Ruzo. He learned that there was indeed an oil well more than a mile away, but the company that operated it was forthcoming with information about its operation. Stories told by the local shamans also suggested the river had been around for generations and Ruzo found mention of a thermal river in historical archives that documented the area before any oil development. So Ruzo concluded oil activities didn’t affect the river

“The only remaining option is it’s just a ‘normal’ hydrothermal feature where waters are seeping deep into the Earth, heating up, and then coming back up quickly,” Ruzo says.

Thermal springs often undergo the same sort of process (hot springs in Arkansas’ Hot Springs National Park are examples), but the size of this boiling river in Peru is what sets it apart. (Ruzo estimates that the entire river system — which starts out as a small, cold stream — is about 5.5 miles long, and the river at times is more than 80 feet wide, though in those areas, the water is shallow). 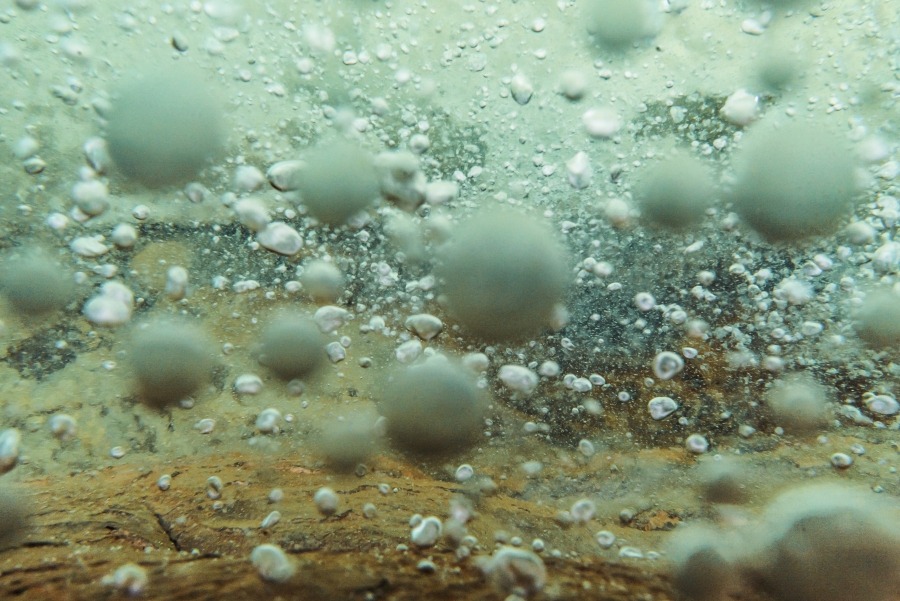 Beneath the surface of the Boiling River.

“I personally have never seen anything at this level,” says Maria Richards, coordinator of the Geothermal Lab at Southern Methodist University.

Richards, who accompanied Ruzo on one of his research trips to Peru, hypothesizes that the river springs from multiple faults. “The Earth is full of these little mini fault segments in the rock,” she explains. The idea is that as water (Andean snowmelt, for instance) seeps into the Earth and heats up, pressure builds. Increasing pressure pushes the water back through those little faults, which serve as conduits to the surface. The greater the water volume, the greater the pressure, and the more forcefully the water will gush.

For his part, Ruzo will continue researching what makes the river so unique. In addition to conducting geophysical studies and examining the basic geology of the area, “we’ve been doing geochemical studies — as far as elemental fingerprinting of the waters and rocks in the area and hydrothermal minerals — as well as isotope studies,” Ruzo says. The next step, in his sixth field season at the river, is to date the waters to better understand how long they’ve been flowing underground.

Ruzo is also looking into designating the river as a national monument, which would have the added benefit of partially protecting surrounding areas from vast deforestation. He plans on publishing his research findings in the near future.